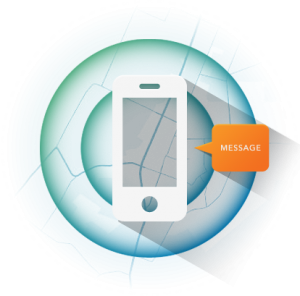 In readying our staff, we tested a new interactive training method. We blended the new dojo-style lessons coming out of Esri Training with a series of mini internal hackathons. The conditions were: make something, think together, work as a team, and basically code 'til your fingers hurt. The goal was simple - ready ourselves to help developers incorporate Geotrigger events in their apps.

Five support team members gathered around comfortable chairs brainstorming an application idea. The application we decided upon through consensus was a self-guided tour application of the Esri campus. Since time was of the essence (18 hours to deliver something), we eliminated doing Disney and other major theme parks to keep things simple. The rest of the day involved provisioning our development environments (getting the required iOS and Android pieces in place) and reading the Esri Geotrigger Service Guide.

Andrew W. scanned social media from our Geotrigger Service developer team. He read through the PDX blog, Twitter feeds from @EsriPDX, and anything he could find on GitHub to give the team a boost. Andrew focused on Android and trained using Eclipse and Android Studio.Noah S. also skimmed the feeds while reading Apple's help documentation on how to provision a profile to use push notifications. For Noah and I, the goal of the iOS app was to keep things simple. Initialize Geotrigger events in the main class implementing Application Delegate. Open a splash screen which implemented UIViewController and then segue into a UIWebView containing a Web Map of our campus. Essentially, while looking at the campus map, we wanted app users to receive informative messages about where they were on campus.Jason H. was our Esri’s Learning Center coach on Day 2. Jason has been instrumental in getting dojo training techniques off the ground. His central role (alongside doing his share of the coding) was to make sure everyone collaborated. Essentially, with five SDK developers training together, only two machines were used to build the self-guided tour app. Paired together, working together, working in teams - we talked out loud, scribbled across the white board, unraveled challenges, spoke code, pecked on the same keyboard and provided an endless stream of encouragement - even when times got tough.

Learning Day 3 led to many breakthroughs involving the core fundamentals. Major concepts like Tags, Triggers and Devices had set in. Conditions like ‘leave’ and ‘enter’ and tracking profiles like ‘fine’, ‘adaptive’ and ‘rough’ became a part of our vocabulary. We also had time to experiment with non-geographic messaging (possible via ArcGIS Online) and sent this message by Benjamin Franklin which inspired our training event.

"Tell me and I forget, teach me and I may remember, involve me and I learn."

We also spent a significant amount of time annotating the steps we took on Day 3. The list of challenges we encountered became the official training topics used in follow-up Geotrigger Service trainings. Best of all, we completed what we set out to do and finished our self-guided tour of Esri's campus.

In summary, everyone in Support and Development are excited about this release. We have a great team ready to support any questions people may have regarding the Geotrigger Service and their supporting SDKs, and we want to make every ArcGIS developer successful. In addition, our project-based learning approach is something we are going to continue to refine in Support Services. If anyone has similar training methodologies in their workplace or is ever interested in attending an Esri-sponsored hackathon or Meetup, let us know!Doug C. - Advocacy Lead
Labels
Tags (10)
0 Kudos
Share

About the Author
I like things having to do with GIS. My greatest challenge in life in making sure I am being a great dad and being able to deliver what people want with software.
Labels