by Anonymous User
Not applicable
3 8 22.8K
Wouldn’t it be wonderful if we lived in a world where our boss just handed us a 100 percent accurate table of XY data so that we could generate the point feature class using the “Display XY” tool and be done?

Hey, we can dream can't we?

In the real world, though, you’ll probably find that the XY locations you were asked to plot were not 100 percent accurate. The story usually goes like this:

“Two days after creating a point feature class from thousands of XY locations, my boss walked into my office and gave me updated XY information for a few specific points. Now, I have to update these locations on the table and recreate the feature class, or I have to create a feature class using the new table and then append the two. This sure is a lot of work!”

Well, read on, because I’m about to make your world a little brighter! It’s actually not too hard or too much work to handle these update-type jobs!

Running geoprocessing tools on thousands or even hundreds-of-thousands of features to update just a few points can be slow, depending on the size of the data. Consider the following alternative workflow when updating XY locations.Example: You have a feature class called ‘S’ that has 105 point features. You received a new XY table that has updated locations for 13 points. Update the point locations by doing the following:
Now, we know the points are placed in the new “exact” locations, but the X and Y fields still need to be updated. How can the X and Y fields be updated for just these few features?

Two approaches you can use:

Using Python, join the tables and use a combination of the Writing geometries and the UpdateCursor examples to update the geometries of the old points with the lat/long of the new points.

Join the tables, export the attributes to a table, and then Display XY data.

But if the new CSV has the new geometry and the correct attribute values, what about truncating the original feature class, use the Display XY data to create points from the new CSV, and then append to the original data?

I left out some details for simplicity in my example, but the reason I didn't Display XY data to create points from the new CSV, and then append to the original data is because the new CSV did not contain all the fields as in the original table, and there has been a lot of manual updating to the attributes of the original table that I don't wan to loose - even some Latitudes/Longitudes have been manually updated. Essentially I was looking for fewer steps to move the existing points in the existing layer to the current XY coordinates than what it takes to export the attribute table to Excel, convert to CSV, add the CSV to the workspace, Display XY data to create an event, and then export data to create another feature layer. Sounds like that's the best way to do it though, without getting into Python. Thanks again.

I came across this post while trying to fix my x,y attributes, hopefully this little tidbit helps streamline the process of figuring it out from both angles!

Points moved successfully. I'd like to move endpoints of lines in addition (outside a geometric network) - is there a way to do this ? This is giving me the error. 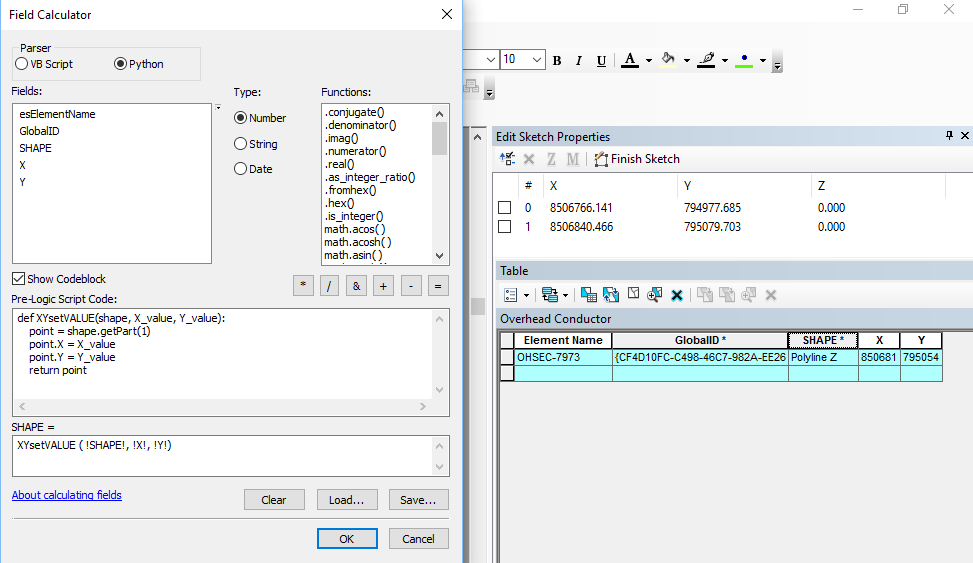 Have any one  figured out how to get this script to run ? I am getting the 99999 error also.