On BioBlitz, Fieldwork, and Web-based GIS

Esri Frequent Contributor
0 0 151
Last week I had the opportunity to participate in BioBlitz 2012 at Rocky Mountain National Park, Colorado, USA. BioBlitz is a 10-year partnership between the US National Park Service and National Geographic with three goals: (1) Highlight the diversity of national parks by conducting a taxonomic inventory; (2) public outreach; (3) to inspire young people to pursue careers in science and geography. During one day, I went into the field to collect and categorize macroinvertebrates in a beautiful montane stream (shown here in ArcGIS Online) with 40 students aged 11 to 13. 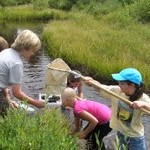 After collecting the data over a period of five hours, the data was identified by the students according to a detailed classification chart.

The data was then input into a web-GIS called FieldScope, created by National Geographic and based on Esri technology, and viewable that same evening by anyone on the web.

It was wonderful to work with our partners at National Geographic and in particular, with students, and four things struck me through this event. First, it is important to get students into the field repeatedly, and at young ages, to provide rich experiences and a love for the outdoors and the environment. During the next day, I met environmental and youth advocate Juan Martinez, who had a powerful experience with an Eco Club in south Los Angeles that changed his life. I was impressed by the high quality and collaborative nature of the students’ work. They were interested not only in getting wet collecting data, but they were just as interested in classifying the data. In fact, they were so immersed that nobody happened to notice a bear about 100 meters away, documented by a photograph that another group showed our group later that day! 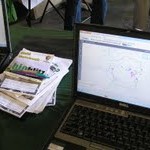 Second, powerful things can happen when students and professional scientists collaborate, as evident here and with such efforts as GeoMentor, GIS Corps, and Project Budburst. BioBlitz brought together hundreds of students, over 100 scientists, and thousands of the general public whose two days of data collection resulted in over 400 bird, fungi, macroinvertebrate, animal, and vascular plant species that had never been documented in this particular national park before. Third, the event reinforced the concepts that Jill Clark and I wrote about in the book The GIS Guide to Public Domain Data: As citizen science projects gain in popularity, enabled by powerful, easy-to-use web-GIS and field collection instruments, how can data collected by a wide variety of people be managed and cataloged that is useful and allows people to understand how that data was collected, categorized, and mapped?

What are some meaningful field experiences that you have had?