Esri Frequent Contributor
0 0 773
In my last post, I discussed how to easily create compelling Cartograms in ArcGIS.  I would now like to point out one of the best things about the tool:  You are not confined to creating cartograms of variables by countries of the world.  Think outside the box!  You can create cartograms for any set of polygons that you choose!  A set of provinces or states, neighborhoods in your community, or even watersheds are all good candidates.

Let's take population from 1900 to 2000 for a state, such as the great state of Kansas.  You and your students can certainly create standard choropleth maps showing the population each census year and even a animation to help visualize the changes.  But creating cartograms of the population in each county provides additional insight.  See the output from selected years, below.  The cartograms show the settlement of the high plains (western Kansas) from 1900 to 1930, followed by population loss that continues in some counties all the way to 2010.  Coupled with that is the rise of the urban centers of Wichita (south central Kansas) and Topeka, Lawrence, and Kansas City (northeast Kansas).  The combination of these trends, brought about by social, physical, and economic forces, squeeze some of the northern and western counties so much that they are almost invisible by 2010.  I've been to many of these counties, though, and rest assured that there are some vibrant communities and good people there!

Think about doing this for your own area--population change in your own state over time, water quality or river flow differences by watershed, or crime rates or median age by neighborhood in your own community.  If you do this, I think it is advantageous if the readers of your cartograms know what the areas that you are analyzing look like as a standard map for comparison purposes.  Thus, you might consider providing this standard map at the front of your set of cartograms, as I do below.  That way, your audience will more readily understand how the variables you are mapping distort the "standard" way of looking at that area.

The possibilities for increased spatial literacy and understanding with cartograms and ArcGIS are endless. 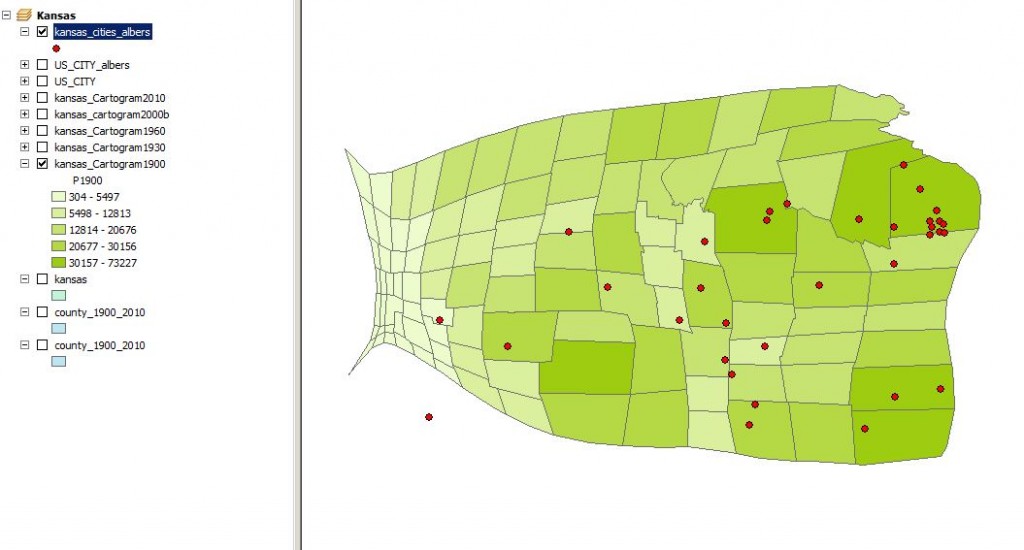 Population in 1900 by county in Kansas. Many of the eastern and central Kansas counties had similar population totals.

Population in 1930 by county in Kansas. The western third has now been settled, but the east continues to increase at a more rapid rate.

Population in 1960 by county in Kansas. Many western counties have lost population or gained very little compared to the rise of the major urban centers of Wichita, Topeka, Lawrence, and Kansas City. 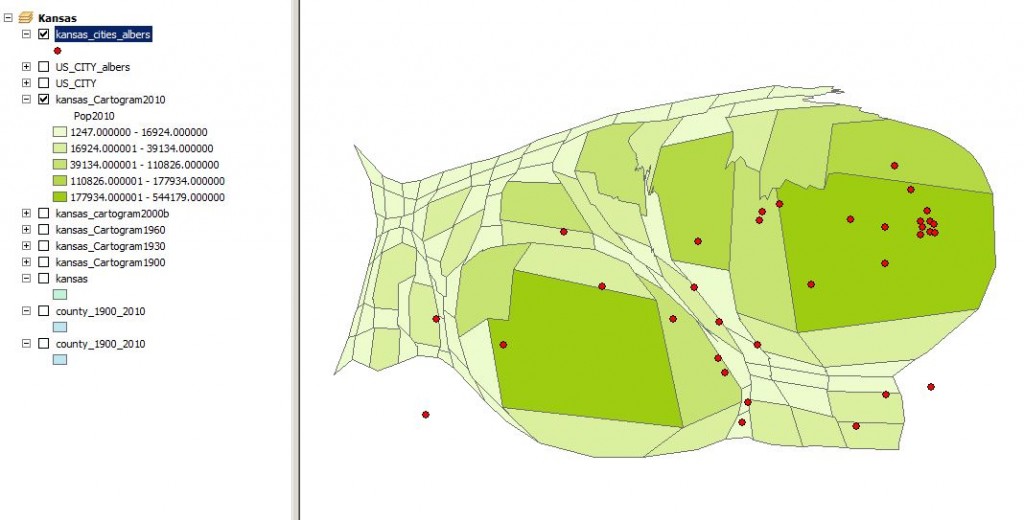