We're beginning to work on support for editing complex route shapes within Roads and Highways and want to make sure we cover the editing scenarios you'll have with these types of routes in your data.

What we're asking is for you to provide us examples of the edits you've made in the past and expect to make in the future to complex route shapes.  This includes routes like loops, lollipops (cul de sacs), alpha (self intersecting), branch, barbell, and other complex route shapes.

Please include in your examples what type of route, what type of edit, and where on the route is impacted (for example, do you edit the loop portion of a lollipop or just the stick portion).

You can reply to this post or if you'd prefer email me your examples (neasley@esri.com).

Thanks in advance for providing these examples to assist us with supporting these types of routes in the software.

Thanks for soliciting input on this!

The most important case to our business is the case of self-intersecting signed routes. The self-intersection is typically due to the route passing through a limited access intersection. Here's a good example: 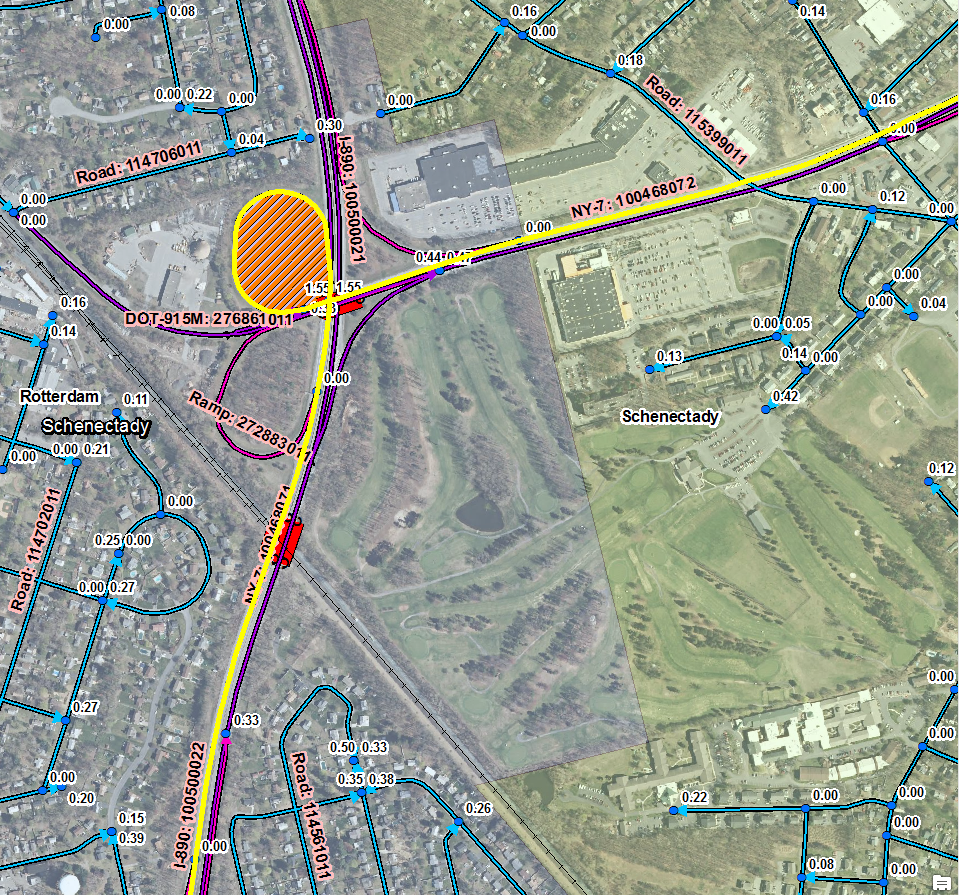 Routes like the above example of NY-7 in Schenectady County, NY are currently built with a small gap at the point of self-intersection. Once complex geometries are supported, we'd soon after remove the gap from the approximately 25 state routes.

We have a fair number of ramps that exhibit a similar geometry. We haven't implemented any type of workaround on those R&H routes in Desktop, since they're much shorter and easier to manage than the highways. It would be great if those existing alpha ramp geometries were magically supported when we install the latest ArcGIS! However, if there are some particular requirements regarding Calibration Points, we would probably take the time to implement the self-intersecting support on all of the ramps. It's easier to justify since it's a lasting solution rather than a temporary workaround.

Another case that's likely to come up is with our Local Highway Inventory, which is an annual program that allows municipalities to submit changes to their local roadway network. These changes can influence reimbursement of funds for highway projects.

In areas of suburban development, we'll often see submissions come in piecemeal as the roadways are constructed. Some of these developments are choosing to use "barbell" style roadways. Our business rules dictate that cul-de-sacs of a certain diameter are modeled using a "lollipop" rather than a dead end, and the instinct of most of our analysts is to assign a route to each named road.

All of this means we'll probably want the ability to turn a cul-de-sac into a barbell route, whether it be through reassignment, extension, or realignment. 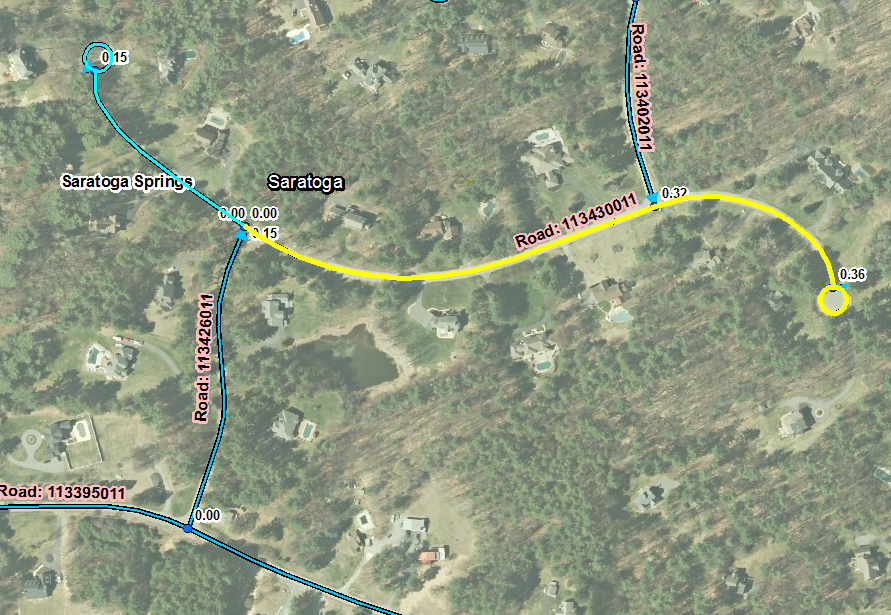 Hypothetically, let's say this is an area of new construction. In our 2022 Local Highway Inventory, the municipality submitted the recently constructed roadway highlighted in yellow. It was modeled as a "lollipop", per our business standards. In 2024, the cyan highlighted roadway was added to the development, opened to traffic, and accepted by the Town government, so it will be added to the Local Highway Inventory. Rather than using two routes here, we'd like the ability to combine the yellow and cyan route into a "barbell" geometry.

Once these routes are in place, geometry edits are unlikely. However, it would still be nice to be able to use the full suite of R&H tools on any portion of the route, whether it be on the loops or the line that connects them. It's relatively likely that the events will be edited again at some point.

Let me know if anything is unclear, and I'll add more examples if they come up.

Thanks Andrew.  These scenarios are really helpful.  We'll make sure to include them in our testing.

"However, it would still be nice to be able to use the full suite of R&H tools on any portion of the route, whether it be on the loops or the line that connects them. It's relatively likely that the events will be edited again at some point."

I agree with Andrew.

North Carolina has come up with a few use cases.

In this example a preexisting lollipop route needed to be Reassigned.  To achieve the desired end result measures were first reversed, then the route was reassigned.  The result is that the lollipop is now the beginning of a much larger route.  The route measure anomalies are turned off in these images, but there is a point anomaly in the lollipop where the route intersects itself. 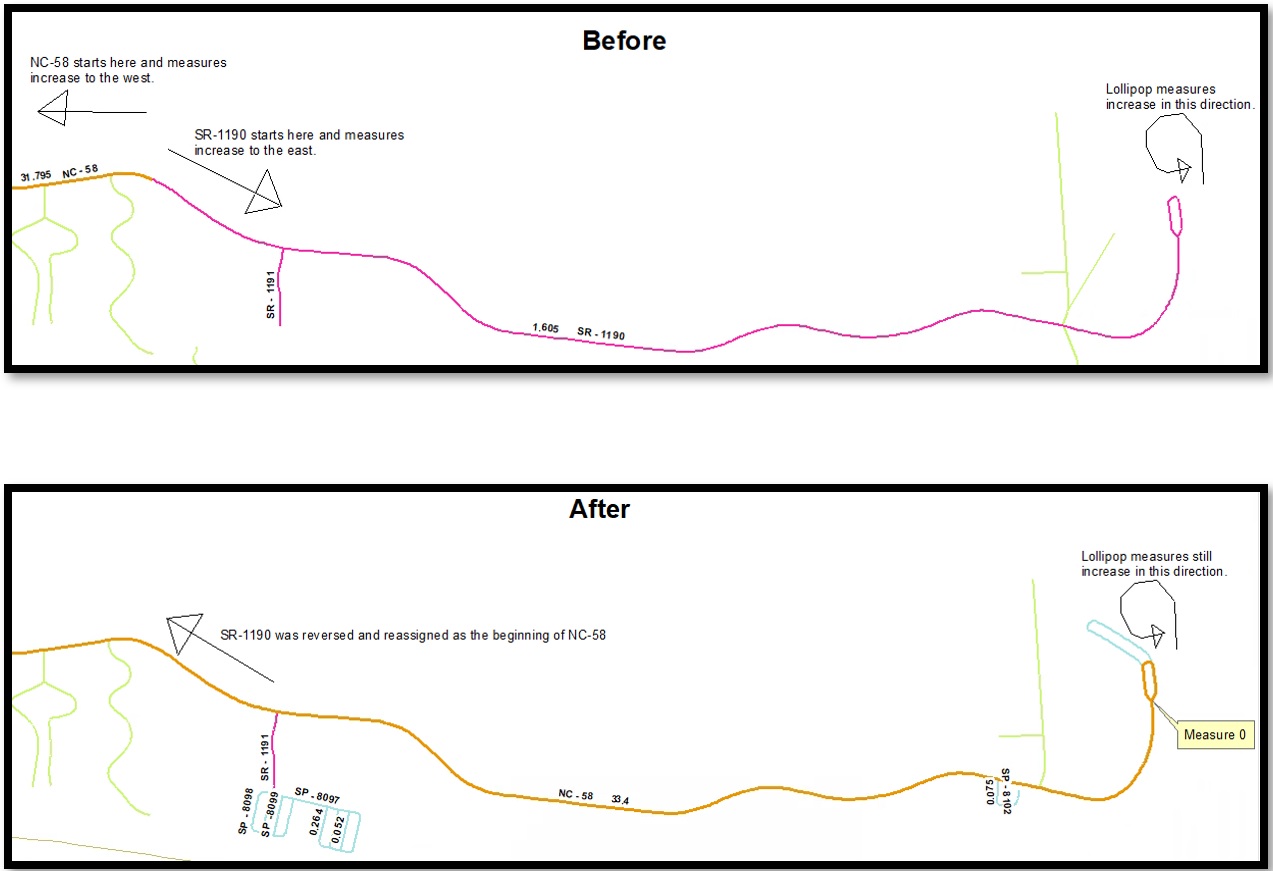 2. Fish route – Practical example
In this example a route representing an Interstate ramp is a fish route. There are many other similar ramps in neighboring interchanges. These are all currently employing the “micro gap” workaround for fish routes.

3. Fish route – Reassign operation
In this example a route representing a ramp is coded as such, but the desired case is to use this geometry to represent the route that current traverses a grade separated interchange. Employing the micro gap workaround would allow this Reassign to happen, but current software bugs related to gap routes make this Reassign an impractical change at this time due to event data integrity concerns. 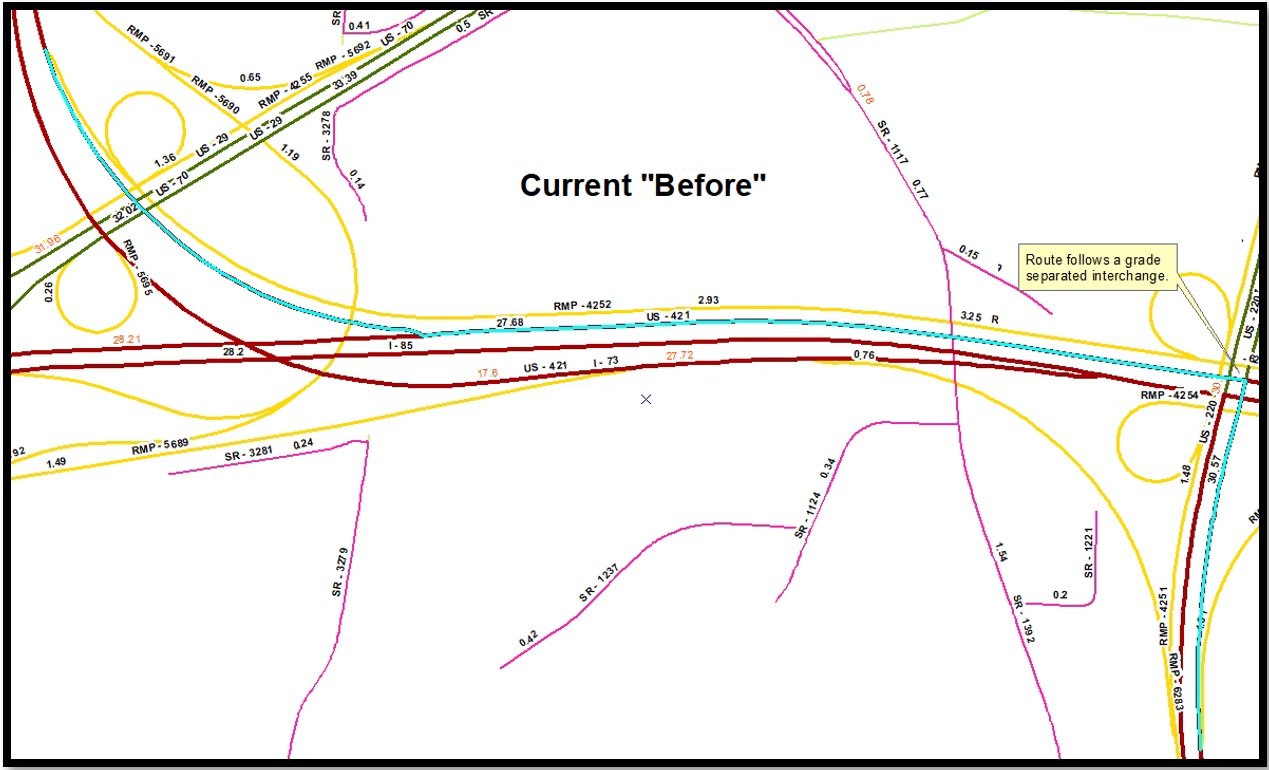 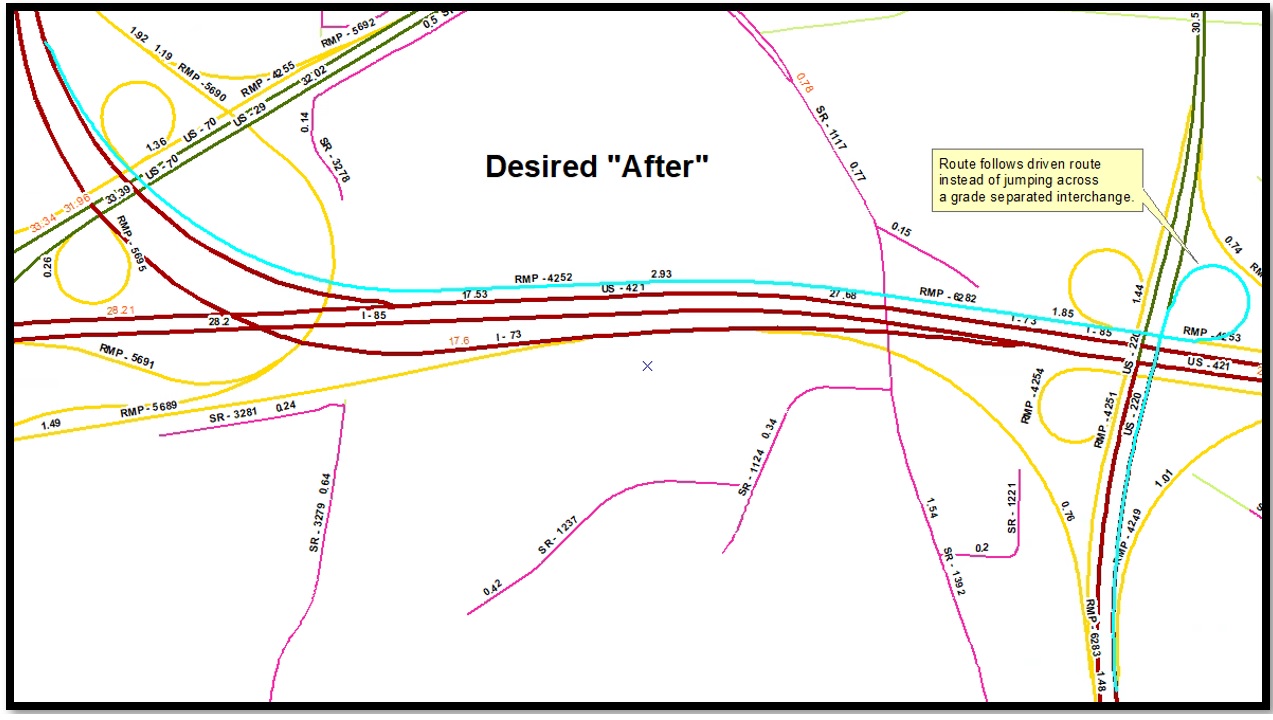 4. Lollipop route – create via Realign operation
In this example a route will be Realigned so that it becomes a lollipop route. All other lollipop routes in the ALRS came to be via a Create operation or via the original data load. 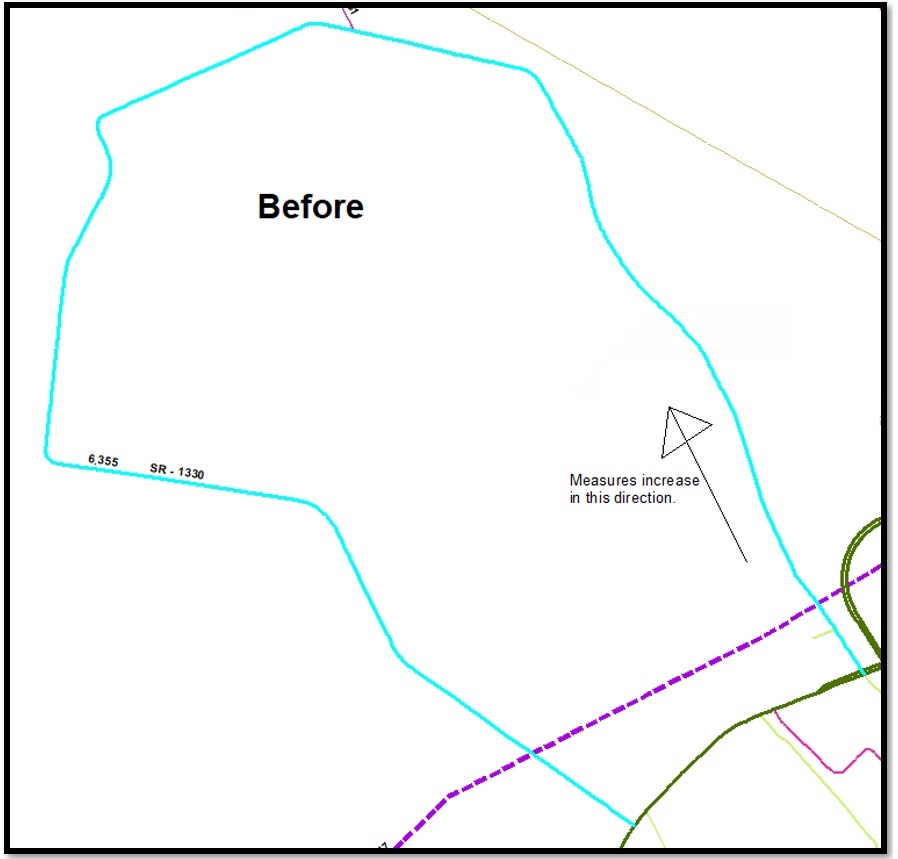 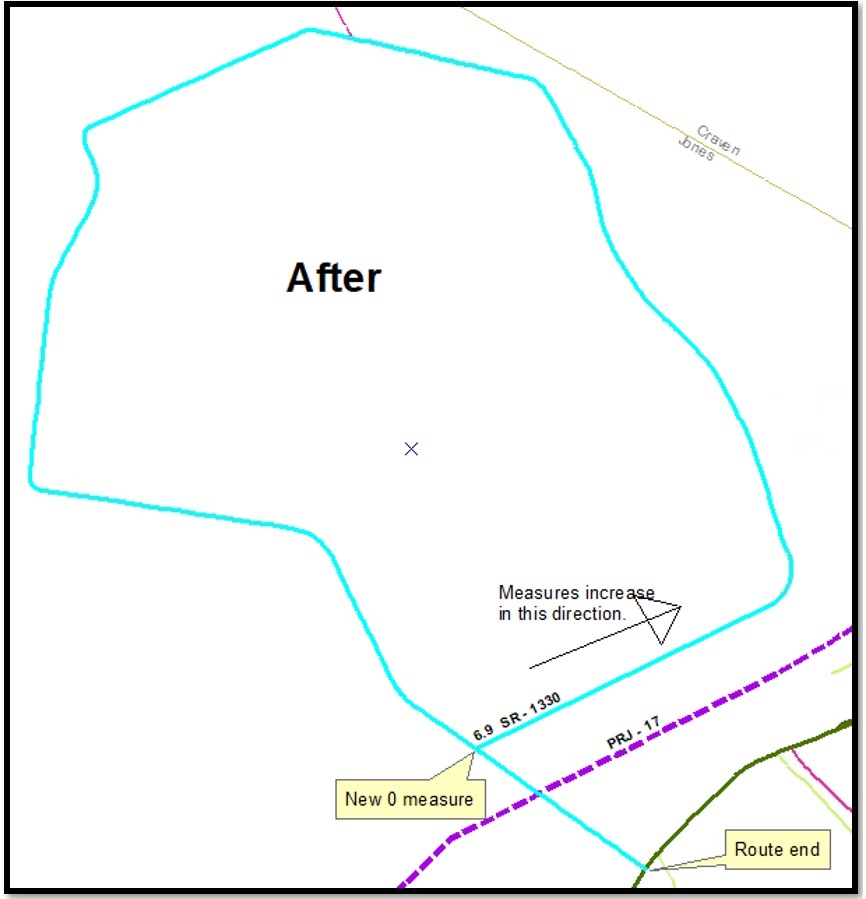