The best teachers share a few characteristics. First and foremost, the students as individuals are more important than the subject, so you have to know and understand each kid deeply to help them. You need to know your subject matter intimately to engage different kids in different ways. You need to organize activities that challenge kids at a reasonable level, and kids don't handle all challenges equally. There are often ways to meet irksome rules while still meeting more important missions. And you must remain adaptable. In today's education parlance, the first three elements are generally called "differentiated instruction" or "whole child education." But the teachers who stand out grasp and implement the last two elements as well. And because of those, the teachers are sometimes called "mavericks." Retired but tireless teacher Randy Raymond, from Detroit, is a "maverick."

Randy got his BS and MS degrees in science in the early 70s, then did research on Isle Royale, the big island in Lake Superior. "We took the first boat out in May, and the last boat back in October." He did some teaching in northern Michigan, and ran a landscaping business. "But my first real teaching began in 1981, with 6th grade science in Detroit Country Day School, where I started addressing kids' needs, especially those needing something other than typical classes. I began an 'outdoor field study' program. All day every Friday, no matter the weather, every class period was outside field study for that hour. Kids liked coming to school." Prominent people liked the special projects underway, and found ways to support these with money or technology. And Randy made more connections with people in business, government, and nonprofits who could make things happen. "I saw GIS in 1987, ARC/Info on Unix, but didn't have the technology or time to cope with it, but knew it would be important."

With a reputation for success, Randy shifted to Cass Technical High School in 1991, teaching older kids. He earned more grants, and in early 1993, at the NSTA (National Science Teachers Assoc) Conference, Randy saw me in a booth, showing ArcView 1.0 for Windows. "I have money! I need to buy a school license!" It took Esri months to set up the mechanism, but Randy became the first teacher to buy this license, and his next 25 years became a blur.

With a special grant, "I got hardware and built a lab, and had students explore and tinker during the day, and taught adult ed classes in the evening." His students began doing projects. One group studied lead in the water in Detroit, mapping lead pipe water service; Randy had wondered if the problems some students exhibited with certain content, and thus on some critical tests, might be influenced by lead in the water. "Four good chemistry kids spent one year doing research, and the next year working out ways to relieve lead loading in the water that happens overnight." Available health data was not pinpoint geography, but showed over 6800 kids with blood lead poisoning. Randy and his students were set to present this at the opening of Esri's 1995 User Conference, but were diverted to the White House to receive the grand prize from the Seiko Environmental Youth Challenge.

Meanwhile, projects for Ford Motors and the City of Detroit earned even more attention, as seen in Esri's "GIS in K12 Education" video (1995) and Esri's book "Zeroing In" (1998). "Some kids and I worked on the city's $100m Empowerment Zone grant, downtown for four weeks every day after school, with our computer and printer there. On the day they had to submit it, I was putting the booklet together and they were holding a police car to get things to the airport and then to DC before the 5pm deadline. President Clinton said that, of all the proposals, ours was the most informative, especially in the first pages, with the maps." 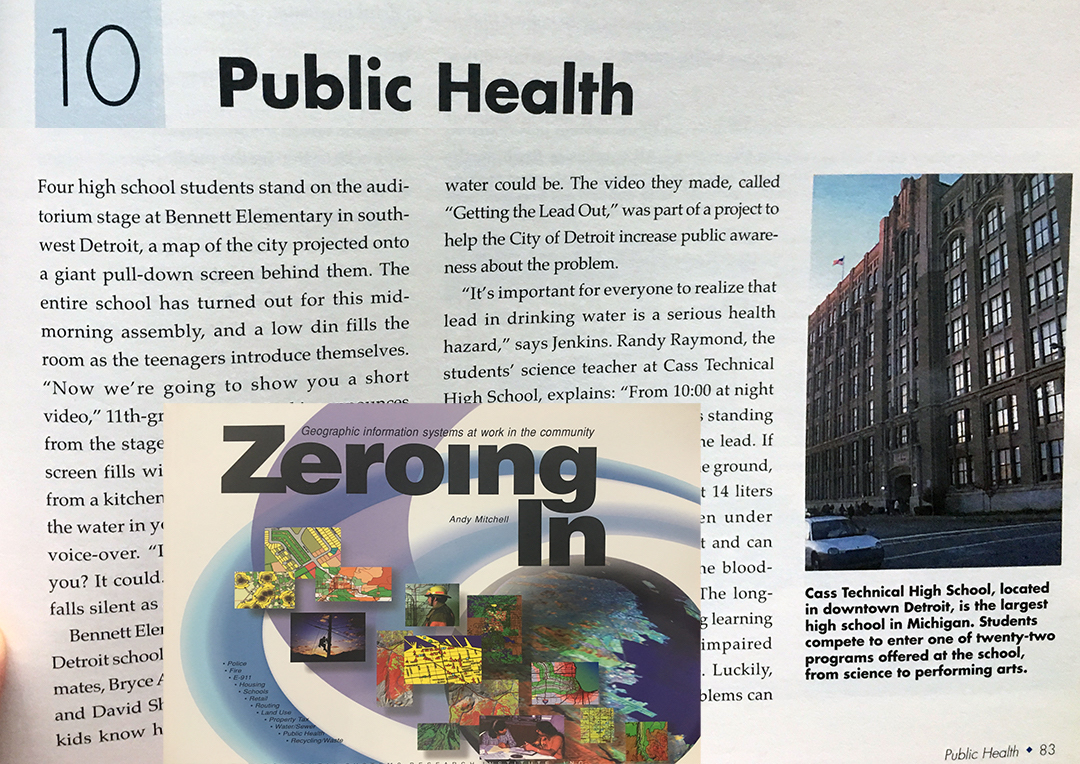 Because of his GIS skills, Randy was moved in 1998 from Cass Tech to Detroit Public Schools Executive Services. "I did data and analysis, not politics." That made him extremely valuable, and students of any age with GIS skills very attractive. Randy taught GIS at colleges and Saturday academies at local high schools. "As a school administrator, I came with the background of a teacher who was accustomed to doing things that met needs, solved problems, and were possible even if not typical." Entrepreneurial associations grew, providing more kids experience with GIS, through collaborations between a mix of governmental, educational, non-profit, and private partners.

"In 2008, the city asked to collaborate on a lead study. We got 300,000 records from 1992-2008, with real addresses; 169,000 were really good, and 80,000 of those were currently in schools, across 13,000 blocks of the region. We published an article in 2013, showing 54% with lead damage when they were young. The results were so obvious that people asked if we rigged it, but we had a number of kids with tests from two or three different years, and we were clearly failing them. They were not being engaged in the special ways needed given the things that had happened to their bodies." (See Education Week's related article.) For publishing a study that exposed damage, Randy got in trouble, and retired in June of 2013.

For a quarter century, Randy has talked passionately, with anyone who would listen, about "purposeful applications of technology in school … It's what you do with the kids, that's more important than any subject you're teaching. Doing something good with them is always my goal… [GIS] is like a whirlwind, and some see the endless opportunities and dive in, while others just avoid it because they don't get it and just can't see the value … It's not magic. The longer they are involved with GIS in real world work, the more they get engaged in what they need to know and how interconnected things are, and they're iterating and editing constantly, making decisions to make something better. You don't just give an answer and have someone tell you that you got it right or wrong, you get the chance to investigate … Kids working with GIS get smarter even if you don't see it on a test … We want them to know that learning is a lifelong process and sometimes we stumble, and things change so we have to adapt … School is meant to be a 'terminal' thing, but learning is not; the more school is an end in itself, the less learning becomes the goal; we need to get people invested in learning rather than in school …"

And now? "The joy of retirement is that I'm only out of [a given project] if I want to be." His current mission is showing school and district administrators how to use GIS to enhance school safety. There are always new people waiting to be exposed and, fortunately, mavericks doing whatever they can to help people of all ages and roles grasp the power of GIS. 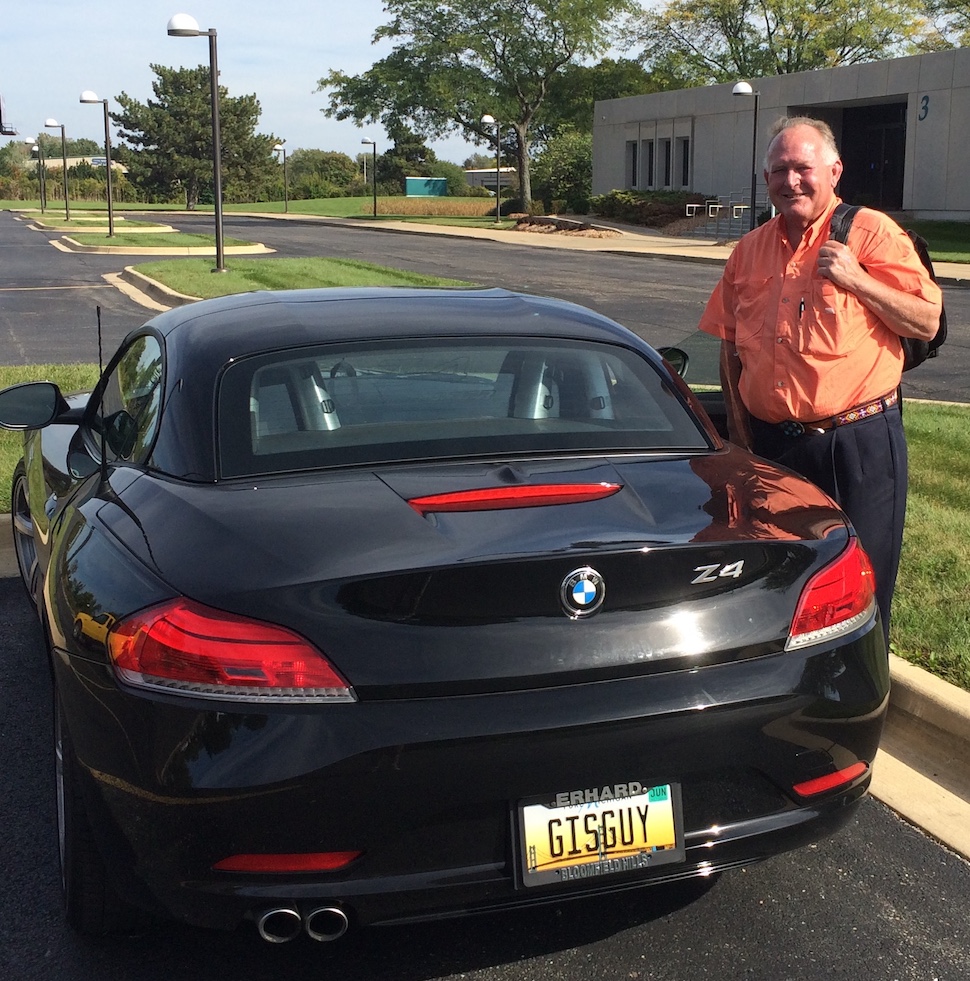