Switches at Underground and Overhead

I have a what are others doing for the Electric Utility Network question.  I have several cases where we have a Overhead Switch located at where an Overhead and Underground Medium Voltage Line is coming together, but the switch itself is only affecting the Underground line.  For example at a pole we have an overhead line running east and west.  They then tap onto that with a short lead to connect the switch.  Then on the other side of the switch is lines going north from the Switch (which is mounted overhead to a pole) to underground.  The switch is not affecting the east/west line at all, it is only effecting the underground line.

I added two images to this post.  One is the GIS of where we just have the overhead switch on the pole and the underground and overhead is connected to that switch.  The other is a very rough drawing that the engineers drew out for me to explain what was happening at this particular location.  I do have other locations that are not T intersections like this example, but just where an line stops as overheads and starts as underground and there is a overhead switch there. 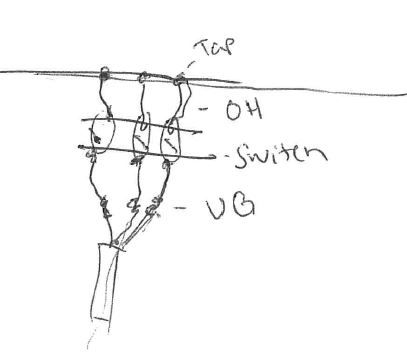 Rough drawing of location by Engineering 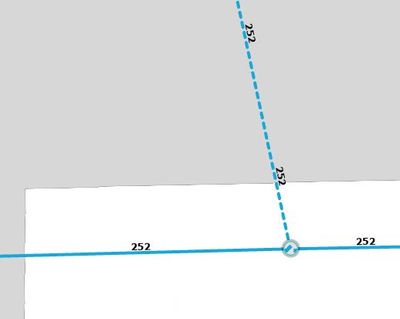 If the purpose of OH Switch is only to isolate / protect underground network, then you may need to add a small piece of conductor from the tap point on pole where conductor "hangs" to a pole to an arbitrary point nearby. Then the UG conductors starts or ends from that arbitrary point . And the OH switch will also be at the same arbitrary location. This creates a tangent or tap condition for UG line. In you other ArcMap screenshot, it is creating an "in-line" situation, meaning if the OH switch is "Open", then electricity flow is blocked for OH as well as UG lines which is not correct.

But in true spirit of UN, you dont need to draw that small piece of conductor. You just create a junction (Connection Point in Naperville model) at the pole without a break in OH line. But OH line must have intermediate vertex at the junction. This junction then logical connects (Junction to Junction connectivity) to OH Switch which should not be coincident to the junction. And the UG line snaps to the OH Switch. This exact scenario is modeled and very well explained at https://gdbteam.maps.arcgis.com/apps/Cascade/index.html?appid=42a3d0e8de544fdf98a26494b1fc5caa

If you are going to rely on the Utility Network to maintain phase, then you will need to model in a specific way.  In the image I have attached, this is basically how you will need to model this type of connection.  This allows the system to maintain the phase connectivity for you.  One thing to note is that the switch should never sit directly on the tapped line, as the system will not know which line is being protected.  Also, if a "Tap" feature is connected to the tapped line, then you will need for the switch to not be at the same x,y,z as the tap.  You would also need a junction to junction connectivity association to create the connection between the switch and the tap. 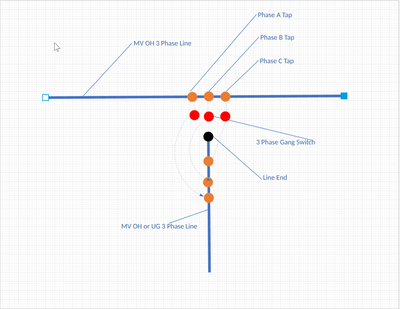 I think I'm closer with your drawing but still have a few questions.  You have a Line End listed on your drawing.  In Line Ends you have an option for an asset type of Overhead Line End (overhead) and Riser (underground).  So if you put a Riser where you have your black dot on your drawing for Line end because that is an 3 phase Underground Line how do you do the association between your overhead three phase load break switch to the riser, as there is no Junction to Junction Connectivity Rules for that?  Or am I using the wrong junction for that underground 3 phase line?

The associations, which did not show up well, are between the switches/fuses and the orange balls which are Tap features.  There are no associations between the Line End feature and anything else.  You really don't need the line end at all.

this image shows it a bit clearer 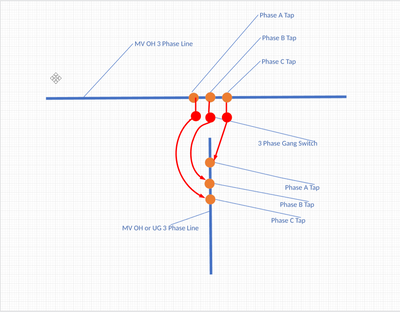 I have the Overhead Tap on the 3 phase Overhead line (east/west on your picture) associated to my Overhead Three Phase Load Break Switch without issue.  It is getting the underground line associated is where I'm running into issue, which is the important line as this is the line the switch is effecting. 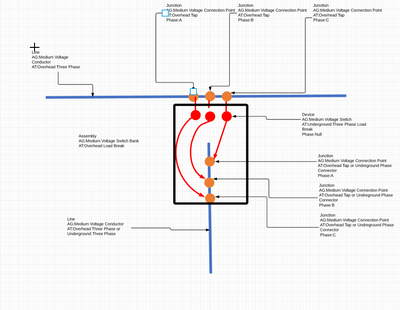 The switch could be either, although in this case, I should have left it as Overhead.  This modeling is based on our latest model which is the ArcGIS Enterprise v1 (model 4).  There is nothing in the model that requires 10.9, you should be able to apply it to a 10.8.  Try it and if it fails, you can email directly at jalsup@esri.com