How do I link to Survey123 field app inbox for a specific feature from workforce or collector? I have set up a bunch of surveys that use the inbox function and related tables to edit existing points. I would like the field crew to see their assignment on workforce and it directly opens up the survey of the existing feature to collect data. Currently workforce opens up the survey for a new point, i.e. "Collect", not "inbox". I tried to configure a pop up from Collector using the instructions in "Survey123 Tricks of the Trade: Editing records ... | GeoNet, The Esri Community | GIS and Geospatial... " but this seems to be only for Survey123 web app not field app. Currently one needs to find the right survey, hit inbox, then find the right feature from an id, rather than from a map or assignment - many ways to make mistake.

Also wondering if this is possible.

I do this by not using repeat tables but instead have the main form be the repeat and the header is a separate FC.  Then relationship class the two together.  Works much better.

Hey Doug can you elaborate more on this process? I only messed with making a relationship class and not repeats and I end up getting duplicate features (duplicate ASSET IDS even with Global ID, it would just create a new point every time using pop-up). So in my situation, are you saying you built a "main form" or "hydrant flushing form" that is essentially is a separate feature class that repeats the values back to the main actual hydrant feature?  (do points still appear? -- I don't want that if so)

Thank you. I know I've asked you related workflows before, sorry for any redundancy.

Sure I have a large write up here  https://community.esri.com/thread/221263-mapping-with-survey123-within-a-polygon-or-admin-unit

Thanks Doug, when I get the chance I will try it out. I'm in same boat of dealing with older people not even using smartphones, glad to hear somebody faces the same challenge of easing workflow!

Is there any update on this? I am currently using the inbox method for hydrant flushing and valve exercising, & have to do the same workflow, instead of utilizing pop-up method from water line to water-break.

There isn't an update currently on this feature, though it is our roadmap.  If you haven't, I would encourage you to register for the Survey123 Beta Program; when this is supported in beta, it will be posted there first.

Awesome thank you James, I will register for sure.

Fight the challenges involved with using related table for Survey123? I see benefits of having "Inspection or Flushing" forms  as a related table instead of built into the hydrant itself, but also see the benefits of having it all in one feature. (The issue I had was using the ASSET ID for the connection between the related table & feature, Survey123 with the pop-up would create a new feature entirely with the same ASSET ID instead of modifying the existing feature data. I was using global ID's.

** I might try Doug's workflow to "have the main form be the repeat and the header is a separate FC.  Then relationship class the two together." if i properly figure out what he is saying & there's not drawbacks. (Going to wait for a response on his end)

Thank you all for the help. Furthermore James, I know you probably don't have a say in this but would love to be able to utilize the feature report setup with Survey123 if it weren't for the cost (Reduce Excessive Credit Cost of Survey123 Feature Reports ) ; seems there is no consideration from *survey designed with minimal field data, but lots of records to *surveys designed that may have lots of fields but few records.

With the release of the Survey123 3.10 field app, it is now possible to open and edit an existing survey from Collector (or other field app) using the URL parameters. However, the survey needs to be in the inbox, it will not find the survey if it is in the sent box, so I have disabled the sent box. I have successfully an existing record by using the objectid. This works with the exception of one situation, when the same objectid  exists in the repeat table Survey123 will display both parent records as a result of the search. I would rather use the GlobalID in my url, however the arcade expression I used only works for removing the brackets in the web map and not Collector. Survey123 inbox search will not find the survey with the globalid brackets.

Two results for my record search, the top one is correct. 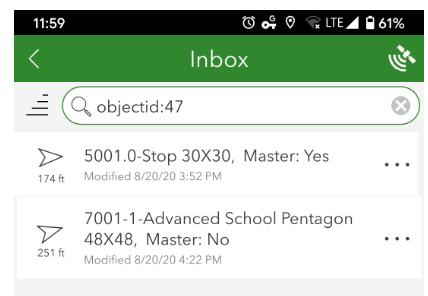 The following arcade expression removes the globalid brackets in the web map, but not Collector. I believe it has to do with the globalid field type as I have used this expression with a string field successfully.

Any help would greatly be appreciated!