There needs to be a way to publish maps with the functionality to turn layers on and off by the end user.

Currently the only option to publish a map within a storymap with this functionality is through embedding a interactive map. This only works on large screens.

This is extra troublesome when using the sidecar which dedicates a very large portion of the screen to display a messege that the content can not be displayed.

I dont know what the reason is for this but I have three suggestions.

@Johan-Flodkvist -- Thanks for sharing this idea and your thoughts about solutions.

The ability to allow readers to toggle layer visibility already exists; it is called map actions. Please take a look at this article about map actions and let us know if they meet your need. Map actions should work much better than embedded apps on mobile devices. Map actions are currently a beta/preview feature, but the beta period will be ending this week.

Regarding suggestion #3, there is a way to remove the "click to interact" button, if you do not need that in your story. That's described here.

Can you provide a little more information about suggestions 1 and 2? I'm not exactly sure what you mean by those.

Thanks for the quick response. @OwenGeo

I might figure out a way to make map actions work. But truth be told what I´m after is a complete "standard" legend/layercontrol.
I will have a look at map actions, Is there a way to incorparate the WMS "getlegend graphics" to this aproach?

In the previous posts I was trying to be clear and concice, I will elaborate as best i can. 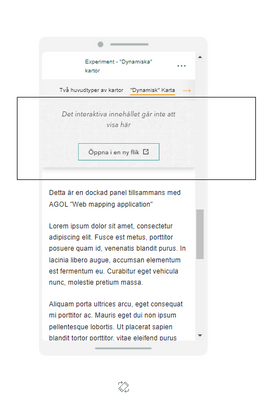 Im refering to the message about the application not being able to show the interactive content (embed).

This is too big.

Unless one wishes to display a map as jpg instead, then its most often too small....  😅

In arcgisonline (AGOL) one can create content.
ESRI have terminology describing what type of content you have created, here are a few:
StoryMap, Form, Dashboard, Feature Layer, CityEngine Web Scene, or Web Map, or Web Mapping Application.

When adding maps to a Storymap one has to decide how to add the map, different ways leads to different esthetic outcomes, especially when considering mobile devices.
When in editing mode of a storymap:

One can choose "Map" under "MEDIA". The user can then choose what map to add. The maps available are (in the AGOL terminology) "Web map"´s.
This type of map functions well in storymaps, even on mobile devices.

What i mean is:
It would be nice (and excpected) to be able to choose the "Web Mapping Application"´s and not only "Web Map"´s when adding a map in a Storymap.

It would be nice to show embedded content within the storymap on mobile devices too.
I suggest the map can be toggled between some sort of thumbnail/small view up to full view in an overlay.

Alternatively something similar to the functionality in classic storymap using map journal. The embed could be behind the text-parts, out of focus and by interaction the embed is moved into focus and in front of/above the text.

OR with user choice just displayed as a link, as it is today.
(but with some alterations as described in #3)

#1 and #2 are under consideration.