In ArcMap, it is very easy to reload table cache where it will call the CSV that was previously used to create the feature class to update the feature with any new data from the same CSV.

In ArcGIS Pro, it seems to me that once we create a feature layer from a CSV file, the attribute table of the feature layer is independent to the CSV file used. There doesn’t seem to be a way to reload table cache in ArcGIS Pro.

I’d like to be able to have the feature class updated using the same CSV (with new data added) instead of me recreating the feature every time we collect new data. This is so that I can preserve the symbology as well and don't need to repeat the steps of updating the symbology.

I’ve considered appending, but as some entries from previous import can change, I prefer to overwrite the attribute table in the feature class instead. Is this possible using ArcGIS Pro or Arcpy? If so, how?

Thank you for your help in advance!

Edit: I tested with ArcMap and ArcGIS Pro, once the feature class is created, the attribute table is independent of the csv and reload table cache in ArcMap/ refresh in ArcGIS Pro will not update with the latest csv. So I guess there is not really away where I can update the attribute tables of a feature class without recreating the features using a new version of the csv?

I have the same question - anyone have suggestions?

You don't say how you actually add your CSV data to the map. If you want to visualise a point dataset from a CSV you use the Make XY Event Layer tool: 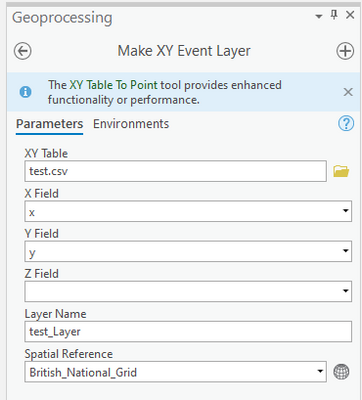 You can edit (add or amend rows) the CSV in notepad then simply refresh the map. The only issue is that if you add a new field to your CSV file then you will need to drop the layer and re-run the Make XY Event Layer tool so it picks are the schema change