I would like to use an arcade expression for a popup window and use 2 different layers.  The main layer I'm using is tax parcel layer where I'll show:

I have those 3 fields with no issue for the popup.  Issue I have is trying to add a field from a CAUV layer that gives the land-use name using arcade expression.  What would be the expression I would use to add the CAUV land-use name/field from a map layer to my tax parcel pop-up?

This is the result I would like to have:

LandUse:(this coming from a different layer within the map)

Any help would be greatly appreciated!  Thank you

Assuming you want to get the land use by intersection with the parcel:

I appreciate your time, but that didn't work.  I added that expression to my tax parcel configurable popup.  Attached is a pdf of 4 pages showing what I did and the layer I'm wanting to use to add to the popup window for my tax parcel. Maybe I did it wrong?   Not sure if showing this helps?  Thank you.

I didn't know your data structure, so I had to guess at the layer and field names. You should replace them with your real names.

Line 2: click on FeatureSetByName and replace my function with what you get 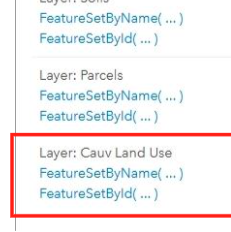 We do this for some of our parcel maps, and we use a similar process to what @JohannesLindner  describes. I'd like to add a couple of points to the topic:

If the landuse and parcel layers do not align perfectly, you will have situations in which:

If landuse and parcels overlay 1:1, that is, each parcel has 1 and only 1 landuse value, then consider modifying the parcel geometry prior to intersecting. You can:

Of course, we can combine both approaches into one. A centroid-based intersection is simpler to perform, so we can default to that, resorting to the negative buffer if the input parcel shape is irregular.

Mind that this expression is only returning a single value. If you want a delimited string of multiple intersected values, let me know, as I have an expression for that as well.

Yes, could you give me a delimited string of multiple intersected values.  As I click on the parcel, there are 3 different land_use polygons within the 1 parcel and  only 1 result of the land_use shows. I take what you're saying would show all 3 land_use results in the popup?

Also, What you and Johannes gave me worked, but it's only showing the letter code of the land_use.  Why is it not showing the entire word?  I've attached 2 pictures, 1 showing what adding both of your expressions resulted in and the 2nd just showing the CAUV popup on it's own and what I want it to show--meaning full name of the landuse.  I appreciate your guys help.  This has been driving me nuts, as I'm not an arcade expression expert.

Thank you.  This worked.  After seeing it though, I'll have to decide whether I'll use it cause it is picking up some of the other adjacent parcels land_use, probably do to the buffering and as you said earlier, the 2 different layers not aligning perfectly.  I'll maybe tweak some of the numbers in your expression to see how the results go.

Overall, I appreciate your time and help!

Happy to help! I used a negative buffer of -1 as an example, but in some of my maps I make that value as large as I can without collapsing any of my parcels, which is usually in the teens (of feet) somewhere.