Why can't I enable the local SQL Server Express instance to store geodatabases?

I'm trying to set up a desktop machine with the Database Server for Desktop. After installing SQL Server express, I get to the wizard screen that prompts the user to choose the SQL Server instance name to enable geodatabase storage. 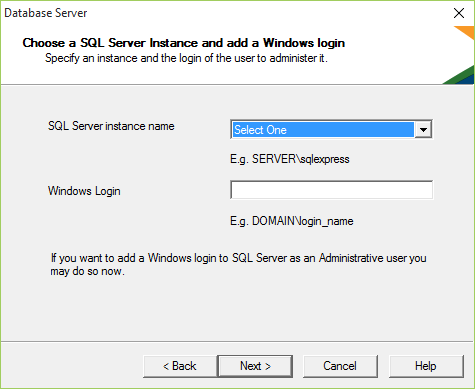 I can verify that the new service that I created exists and is running, by looking at the Services dialog, and in the SQL Server Configuration Manager.

Caveat: The previous user had also previously installed SQL Server Express 2014 and created an instance named SQLEXPRESS, that I removed.

Any ideas as to why I can't see the local SQL Server instance?

I do not know why it does not show the current instance.

I know you can ignore this screen, the user that installed the software will be manager.

Then you can try to use the "database servers" in Catalog to add more users (including admins).