Can't publish service: "Probable cause: The file is inaccessible to Server."

I've been pulling my hair out for three days dealing with this, and it's driving me crazy now.

I have a server running ArcGIS Server 10.2.2 that has been running reliably for a couple of years.  I had not created or altered any services for a while, but when I did it last, maybe in April or May, it worked smoothly. This week, I went to alter one of the services running on it, as I needed to change the symbology of one of the layers slightly.  I made my changes to the .mxd, and went through the file->share->share as service dialog as I always do, but when I clicked on the publish button, I got a dialog that says this: 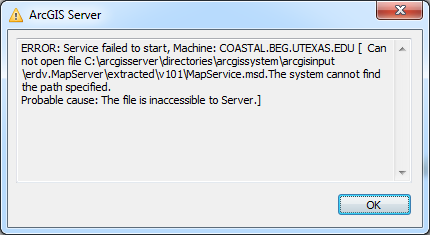 After some troubleshooting involving deleting the service and recreating it, I get this when attempting to publish the service:

The service is actually created, however, but just refuses to start.  Attempting to start it manually, either via the context menu in the catalog or the Manager UI, results in that same error message as seen in the first dialog.

I've tried the following to fix this issue, and nothing seems to make any difference at all:

Any ideas about what I'm doing wrong here?

We have come across this issue a few times. One thing to try is the "Save a service definition file" option in the Share as Service dialog. Once you save the sd (can be locally), log into to server manager and use the Publish Service workflow. We have found that when a specific map document is giving us issues publishing as a service, this option often works. (although it typically is only practical for new services. It requires you to delete an existing service.)

We also noticed that staggering the service Recycling times cleared up a lot of our issues. We have a lot of services running and having them all recycle at the default midnight time would occasionally cause issues with the services. Basically, the msd's within the server store would be locked, preventing us from updating the service. Once we staggered the recycle times, our publishing issues disappeared.