Turn Off Fields with Python

First of all, this is not a duplicate thread as I am not convinced that the one below has been resolved..at least the suggestions and code does not seem to work for me.

Turning fields on and off using arcpy

Another on stackexchange on this topic addresses this in ArcMap, but since ESRI decided to get rid of the mapping module and create the mp module for Pro, it doesn't solve the problem either.

We have a Pro project that houses our web maps for our organization. Recently we turned on editor tracking fields for layers coming from a specific sde, and now we need to hide those fields so they don't display in the web map pop-ups. To get an idea of the scale of this task, there are over a thousand layers that need these fields turned off. I have been scripting in Python for ArcMap for several years, but am relatively new to Pro and Python 3 and the new arcpy.mp module. The example code in the above threads uses arcpy.mapping and looks fairly straightforward - the arcpy.mapping.UpdateLayer() function does the hard work. Well this does not exist in arcpy.mp and the workaround I have seen (and suggested by esristaff) goes like this:

- create a fieldinfo describe object on the layer of interest

- save as layer file

This is all straightforward to me and I am not having issues structuring the code. The issue is that the temp layer created from MakeFeatureLayer is not honoring the new field info. I have tested this interactively in the Python window in Pro:

Printing this shows the fields I need to turn off as visible. Then looping through and turning them off:

Printing field_info now shows the fields I wanted off to be hidden. Great. But then I make a feature layer passing this field_info into it, it shows up in my TOC, I open the fields window on it and all the fields are still on!

The example code from the previous threads stops there, but to me it seems like either the field_info object is not being 'saved' or the MakeFeatureLayer function is not honoring it as a parameter. ESRI's documentation on fieldInfo and everything else is minimal at best, and I have not come up with anything else helpful on Google.

Here is an overly complicated workaround I have gotten to work.

- Save layer of interest as a layer file

- Then make feature layer passing in the new field info

- Then save as another layer file

After lots and lots of testing, I imagine this is a bug and will be opening a case with tech support. If this was built into the design of arcpy, there is no reason I can think of that the FieldInfo properties should not be honored on data coming from a replica database since they are properties of the layer in the map/project and not properties of the data in the database.

I did, however, manage to figure out a workaround, cobbled together with someone else's workaround for preserving the symbology, and my own hack of the JSON code in the lyrx file to preserve other properties of our maps. The solution is rather ridiculous and overly complex for what should be such a simple task of turning off fields. I hope ESRI and the Python community can see the humor in this code

Kind of ridiculous.  Yep.  Couldn't agree more.  I've never been able to to use arcpy to turn off a field.....

That should just about do it....
Reply
3 Kudos

I just used your sample script and was able to hide fields in the feature layer using the updated field info.  What version of Pro are you using?

I was working in Pro 2.3.1, and upgraded to Pro 2.3.2.  I was still able to hide fields successfully with the feature layer.  You mentioned that you were using data coming from an sde database.  Can you export a feature class, and or try on a feature class coming from a file geodatabase?

Interesting idea.. since the workaround I mentioned I first saved a layer file, then turned fields off, then made feature layer and saved a new layer file.

Guess what! Fields were off after doing it on the File GDB version of the data. To ensure I was not going crazy, I did the same thing on another layer in the project coming from SDE and sure enough, the output feature layer still had those fields turned on. Attached is the code I used in the Pro Python window. 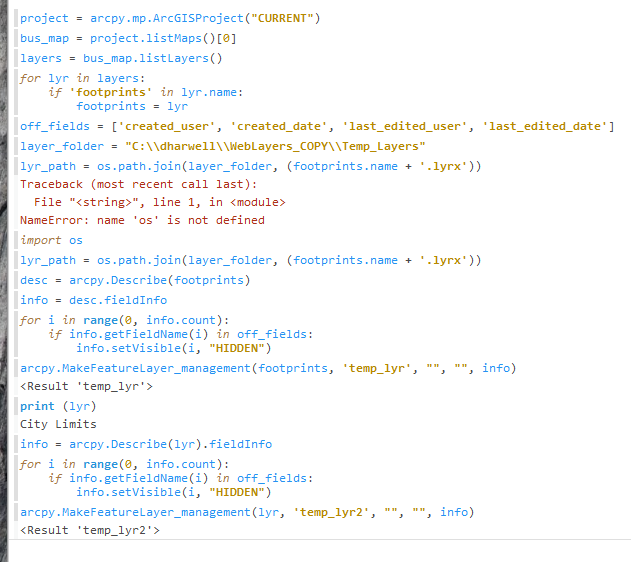 Glad to hear that it worked!

Still does not solve the problem though.. As I stated we have over a thousand layers (all in SDE) that needs these fields turned off. It's completely impractical to have to export each one to a file geodatabase, then do all these steps to turn off the fields (which is already impractical as is) then export them all back into SDE - which I think would require a delete/append as removing and adding feature classes breaks our replication setup.

The fact that it only works on file gdbs, is that not a bug or at least a flaw/limitation that should be looked into by ESRI?

I apologize, I thought you said that other SDE feature layers had those fields turned off.  I misunderstood.  I attempted this workflow with my own SDE database and cannot reproduce your issue.  I recommend that you contact Esri Technical Support for a more in depth investigation.

Hmmm.. wonder if it has something to do with the feature classes coming from our downstream replica database? The way our organization is set up, we have a parent SDE database and a replica of that which all our webmaps point to. I imagine when you tested this you were working in a single sde and not a replica gdb.

I used the same workflow as before: create a field info describe object on the layer, loop through setting the desired fields to hidden, then make a feature layer passing in the new field info. 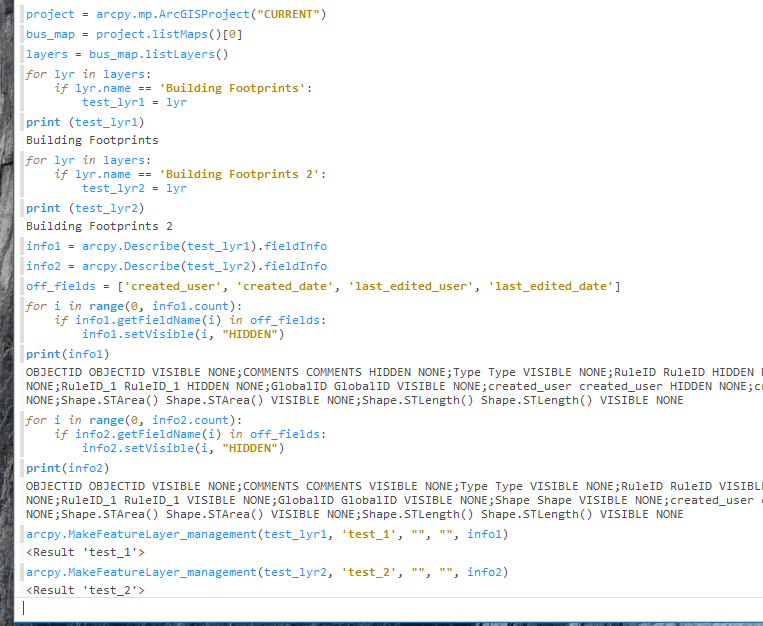