Last week I shared 15 inspiring stories from GIS Day 2018.  These were a joy to write and I hope, for you to read.  Here are 15 more inspiring GIS Day stories from all around the world.  Even with that set and this week's new set of 15, I am just touching the tip of the iceberg, so I invite you to examine the events listed on the GIS Day map as well as this story map.

María Sofía Arboleda, Marketing And Alliance Manager at Esri Chile, shared their GIS Week celebration. Esri Chile was only one of the sponsors of the First GIS Olympics organized by the Pontificia Universidad Católica de Chile and the Universidad de Chile (one of the top ranked universities in Latin America). The prize for the first place in the advance and intermediate categories was ArcGIS For Personal Use Licenses and for the second and third place we gave away Esri books and other items.  María also shared that Esri Chile's staff was encouraged to serve as GeoMentors to local schools. One activity was to invite children to paint a map saying "How do they would like to see the Planet?", "Cómo Quieres ver tu Planeta"  demonstrated in this video.

Selected scenes from the First GIS Olympics organized by the Pontificia Universidad Católica de Chile and the Universidad de Chile, and sponsored in part by Esri Chile.

Dr. Ayad Ayid Wali at the University of Al-Qadisiyah, in Diwaniyah, Iraq, shared that his university's GIS Day event was a great success, with over 40 presentations and 100 participants from different parts of Iraq and from the University of Szczecin in Poland. 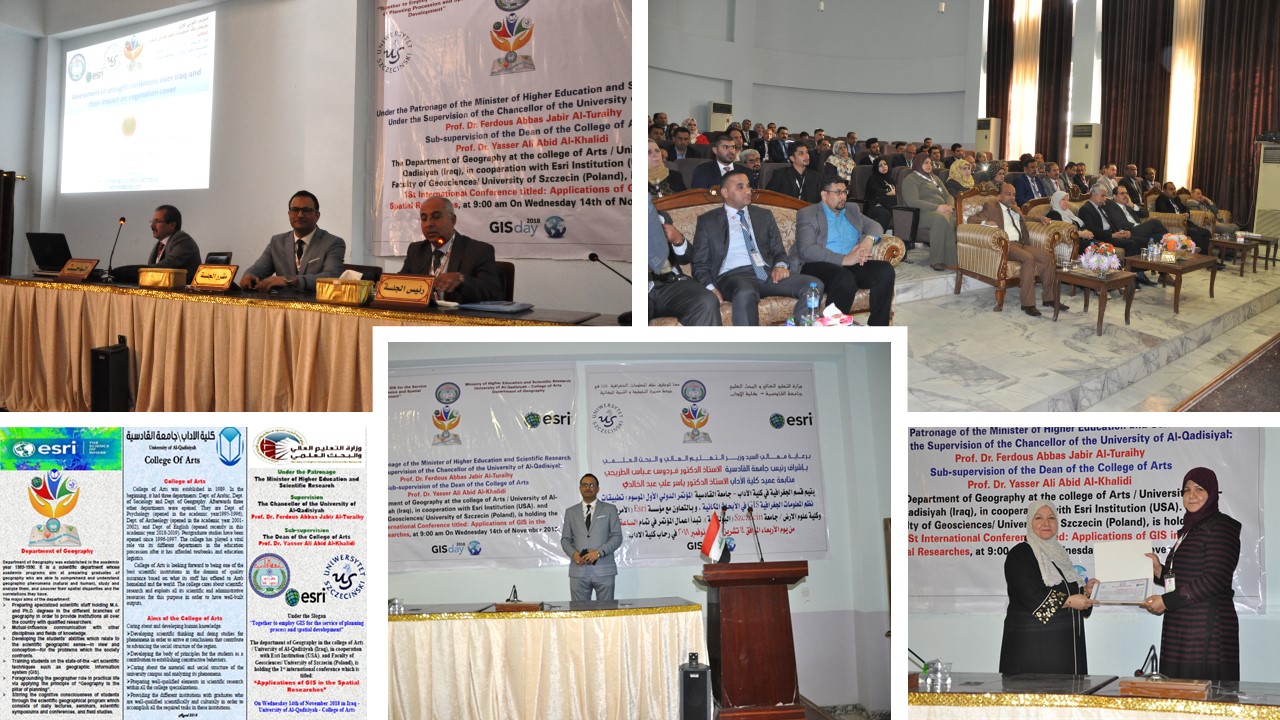 GIS Day event held at the University of Al-Qadisiyah, in Diwaniyah, Iraq.

Thomas Ebert from the state of Oberösterreich, Austria, shared that "For over 10 years, the Landesdienstleistungszentrum has been offering the largest GIS event in Austria.  This year, at more than 30 workshops, the geo-experts provided 400 young people with the dynamic processes and their complex interaction in the fantastic realm of geoinformation.  Of particular interest this year was Terrestrial Laser Scanning, or TLS.  TLS is a ground-based surveying technique with a variety of applications in the field of 3D capture. With its fast and accurate scan rate, the TLS can detect its surroundings without contact and display them highly detailed. The special thing about it is that the system, regardless of the light source, can capture even the darkest environments with precision thanks to laser scanning."  The event was also featured on the news. 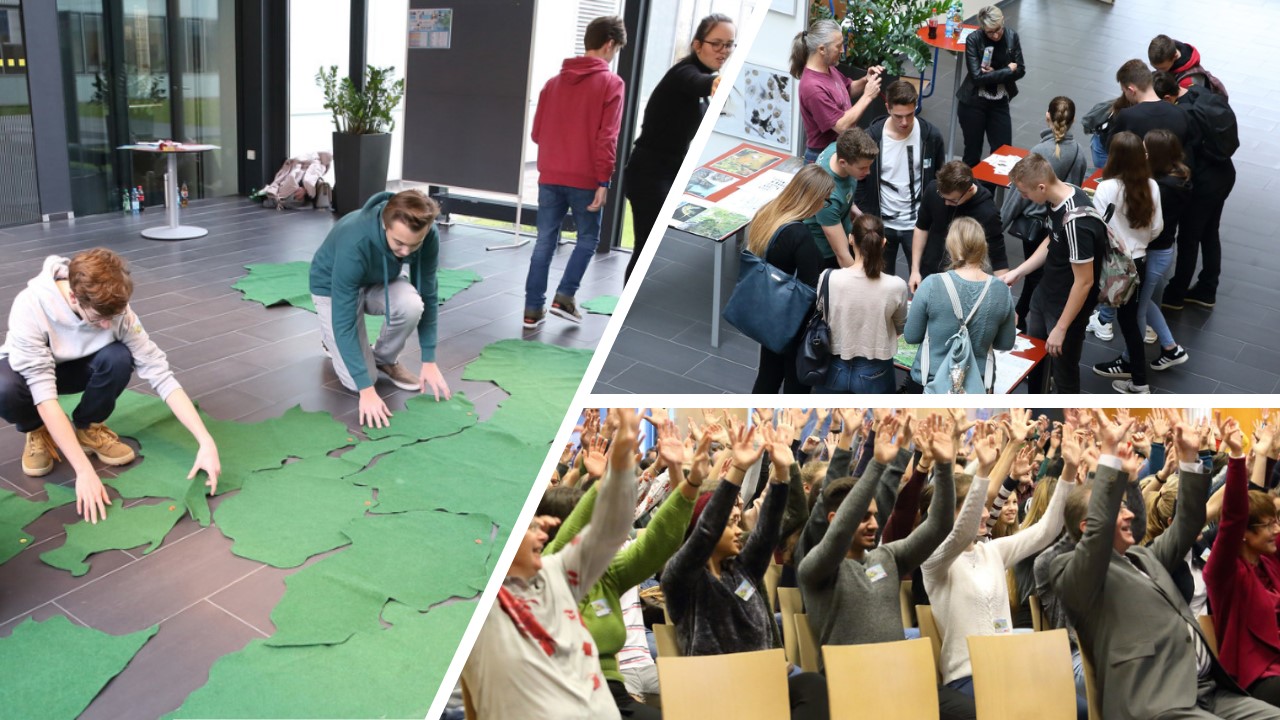 The GIS Day event in Oberösterreich, Austria, from the Landesdienstleistungszentrum, attracted 30 presentations and 400 students.

Professor Adam Mathews from Western Michigan University reported that his  department co-hosted a GIS Day event with their student group (Geography Club, which is a YouthMappers Chapter). Their event featured 60 students mapping data to aid in humanitarian efforts to recent disaster-stricken areas. 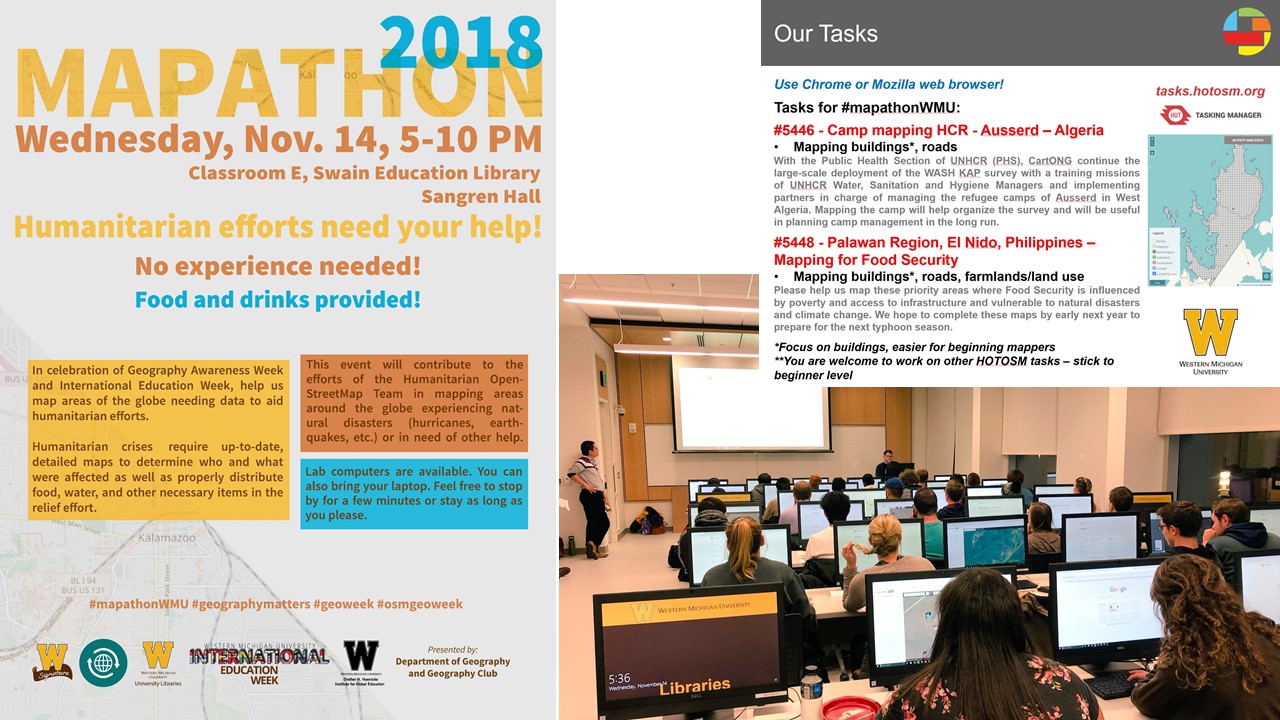 Karen Nickel, Senior Information Manager, shared that "At the Wigan Council in the UK they celebrated this year’s GIS Day with a varied program of themed training demonstrations and fun presentations (including solving the mystery of a long lost pub using digitised old maps and newspaper archives to discover its location and fate, along with an infamous forger's den) for both staff and Elected Members. They also hosted a GIS Gallery exhibition, tested the Symphony AR app thanks to Aligned Assets, and enjoyed some mind rest by colouring in maps of our town centres and eating cupcakes and chocolates (thanks to sponsors Esri, GeoPlace, and Ordnance Survey), and prizes to be won in there “Where is Uncle Joe?” (the Council’s mascot) competition."

Ahmed Haseeb reported about an event held by his GIS Centre, University of the Punjab, which was attended by the principal and experts from academia and industry. The main objective of their program was to motivate students by sharing GIS applications in industry. GIS experts from irrigation, surveying, and the health industry demonstrated GIS developments in their respective organizations. Students took initiative for their future research ideas regarding new techniques and technologies practiced in GIS industry. Two mapping competitions were held among students and positions were evaluated by the faculty. It was followed by traditional cake cutting and prize distribution ceremony. 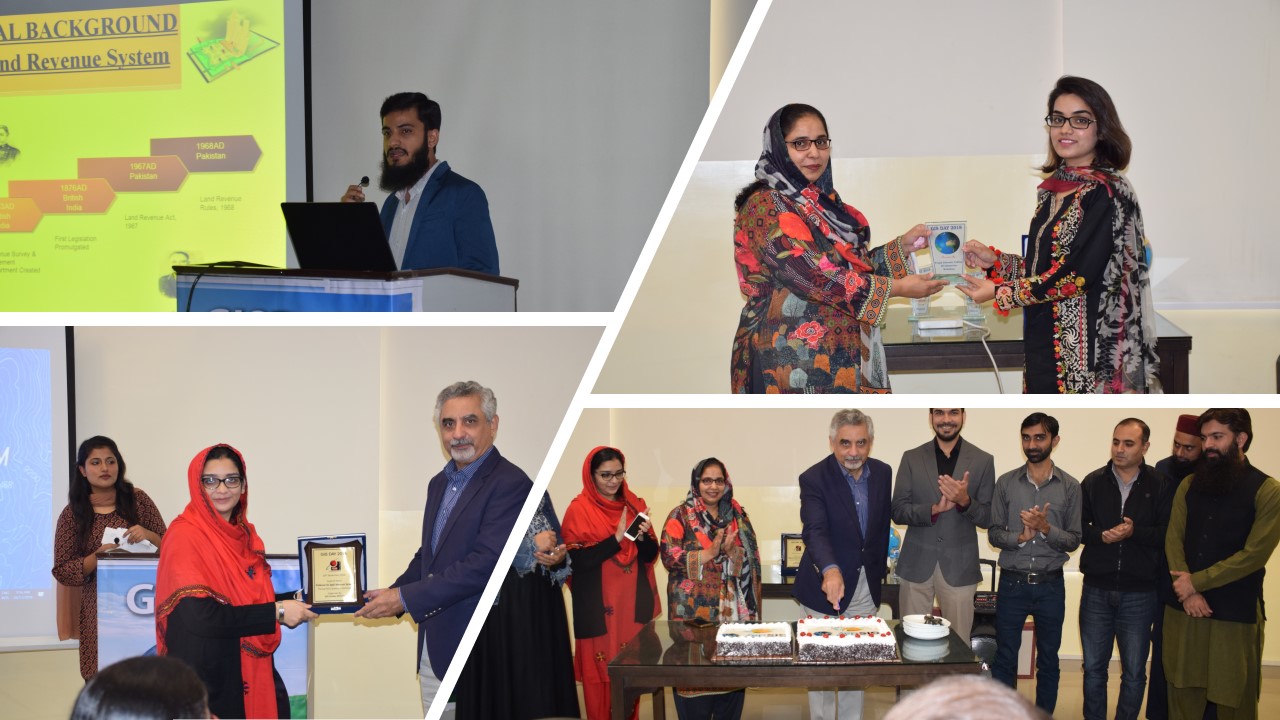 Event held at the GIS Centre, University of the Punjab, Pakistan.

Тетяна Іванівна Дець reported that the Department of Geodesy and Cartography of the National University of Water and Environmental Engineering in Rivne, Ukraine, held their celebration of GIS Day on 23 November 2018.  Students and professors participated with presentations and lectures, and, "all participants were satisfied!"

GIS Day at the National University of Water and Environmental Engineering in Rivne, Ukraine.

Abdulhadi Ali Alzawi shared their celebration at the Tripoli Municipality in Libya:  The program included a presentation of the work done by the Geographic Information Systems Unit in the municipality as well as a gallery of maps.  Their  celebration was attended by many senior officials in Tripoli. 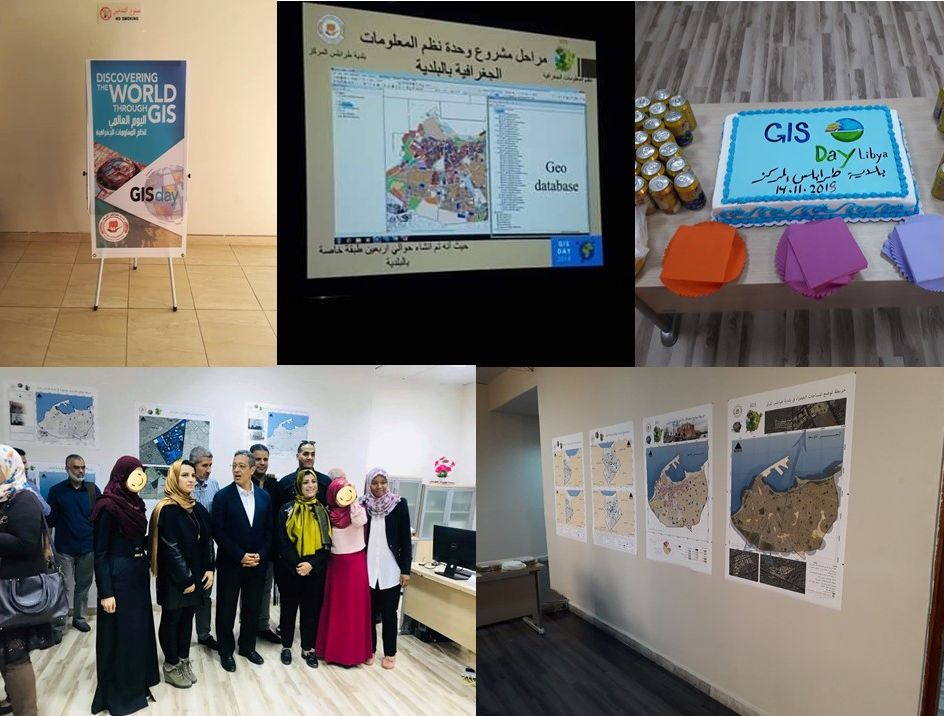 Highlights of the GIS Day celebration in Tripoli, Libya.

Paul Barson, GIS Analyst in the Planning & Development Department in the County of Wellington in Guelph, Ontario, Canada, shared the following geo-cake and an extensive story map featuring some of the many ways in which they are using GIS. 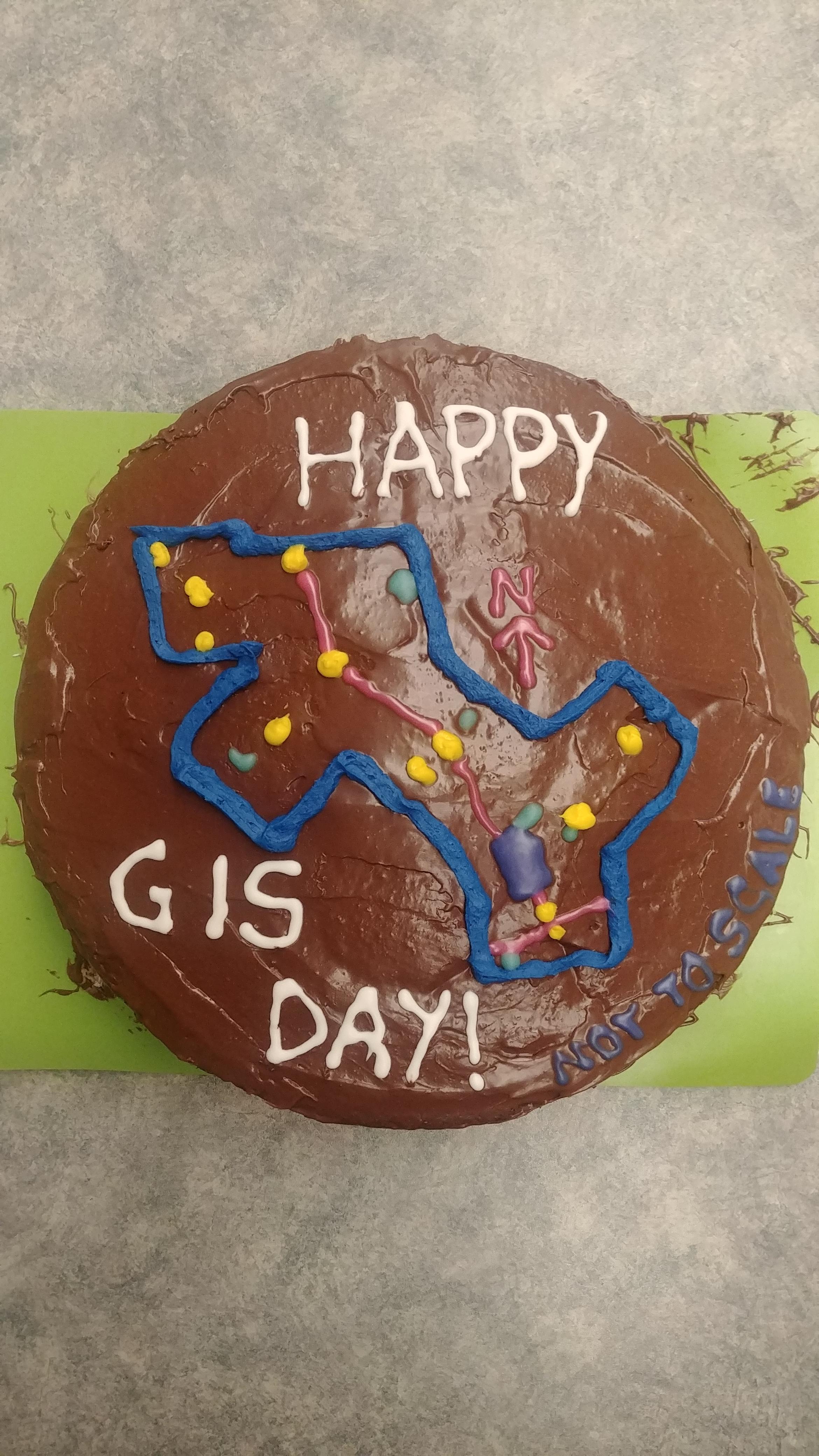 In Malawi, Debora Mtambalika shared that,"On 17th November, I and my four colleagues organized an event for GIS day. We called the people in our neighborhood at area 22B Lilongwe Malawi to fully participate in this event. The people assembled were a few but most importantly they were interested to understand the main aim of the event, what is GIS and its purpose?  We split into three groups, each group having a phone gadget with GPS Essential tool installed. Before collecting a point feature we oriented the each group how to collect a point and afterwards they practiced on the phone themselves. The features collected were Mini-shops, Maize mills, Towers, Churches, Mosques, Water sources and dumping sites. The points were exported to ArcMap and were therefore visualized on a map. The community members were able to appreciate GIS and saw that it is very important to be used for resource allocation in Area 22B.  I really enjoyed to see members of my community asking questions and getting interested to know more about GIS." 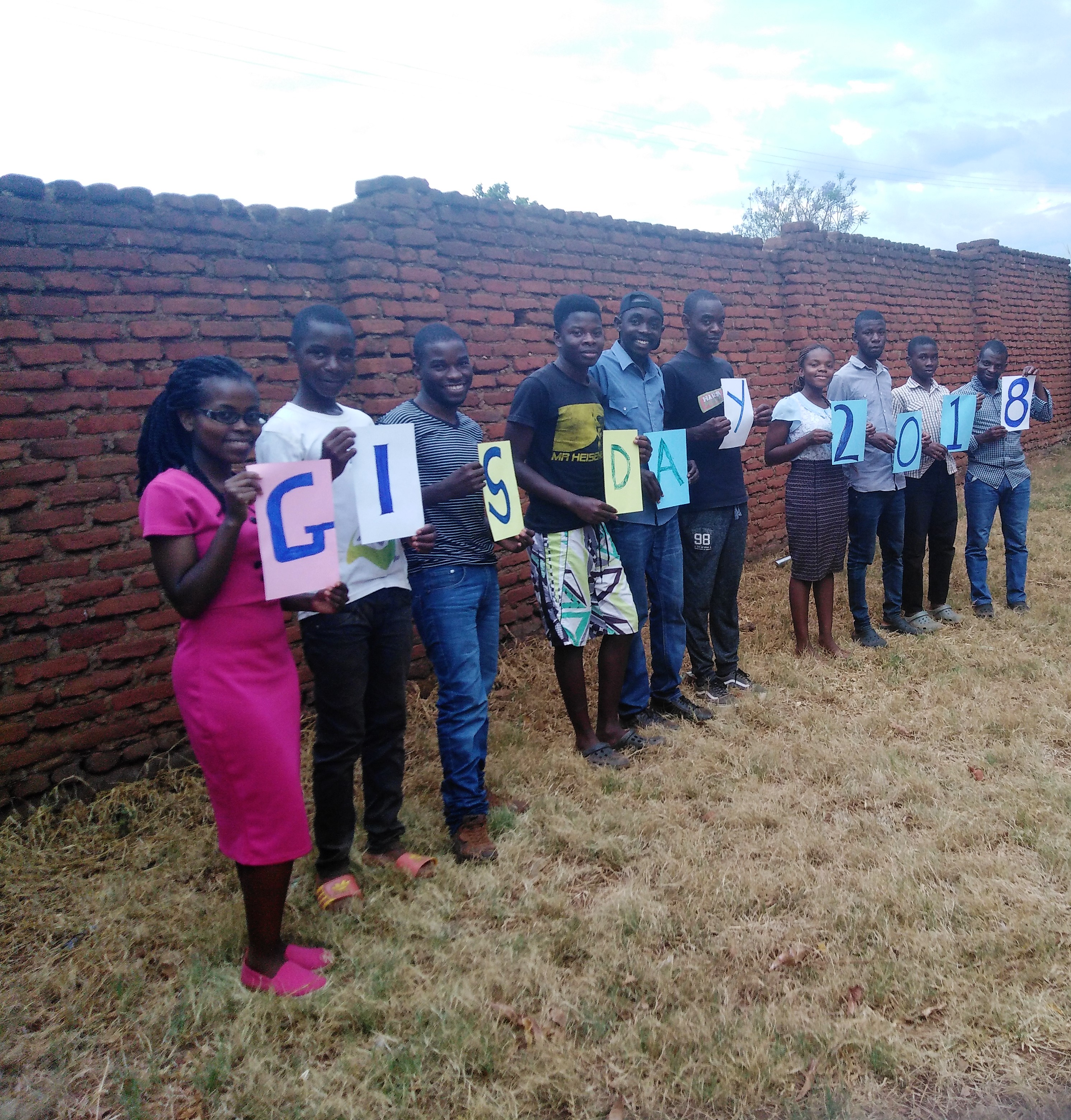 GIS Day event in Malawi, which including mapping of the local physical environment by the participants. 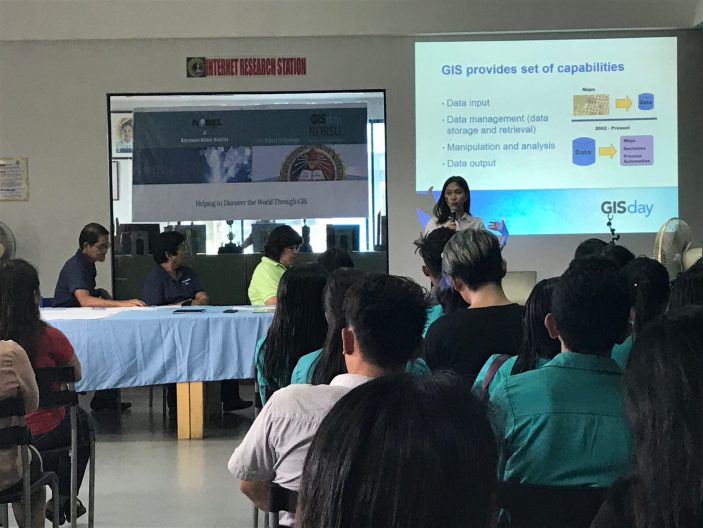 Rounding out the afternoon were presentations from Wilma Robertson (Chair, Idaho Geospatial Council - Executive Committee) about GIS consolidation and the role of the Geographic Information Officer (GIO) and from Heather Glock and Shane Clarke (of Esri) about Web GIS.  Concluding the day with this particular presentation seemed appropriate especially since Web GIS is a paradigm shift.  Participants left the event considering the many places that Web GIS might take us."  In addition to sponsorship by the University of Idaho Library, sponsors included the university's Department of Geography, Northwest Knowledge Network, the Northern Rockies Chapter of URISA, Rim Rock Consulting, Inc., Alta Science & Engineering, Inc., Ascent GIS, Sentry Dynamics, and GravisTech.  Professor Godfrey mentioned each of the GIS Day committee by name and said, "GIS Day is truly a team effort and this group worked hard to achieve another successful event!"

A portion of the University of Idaho's GIS Day event. 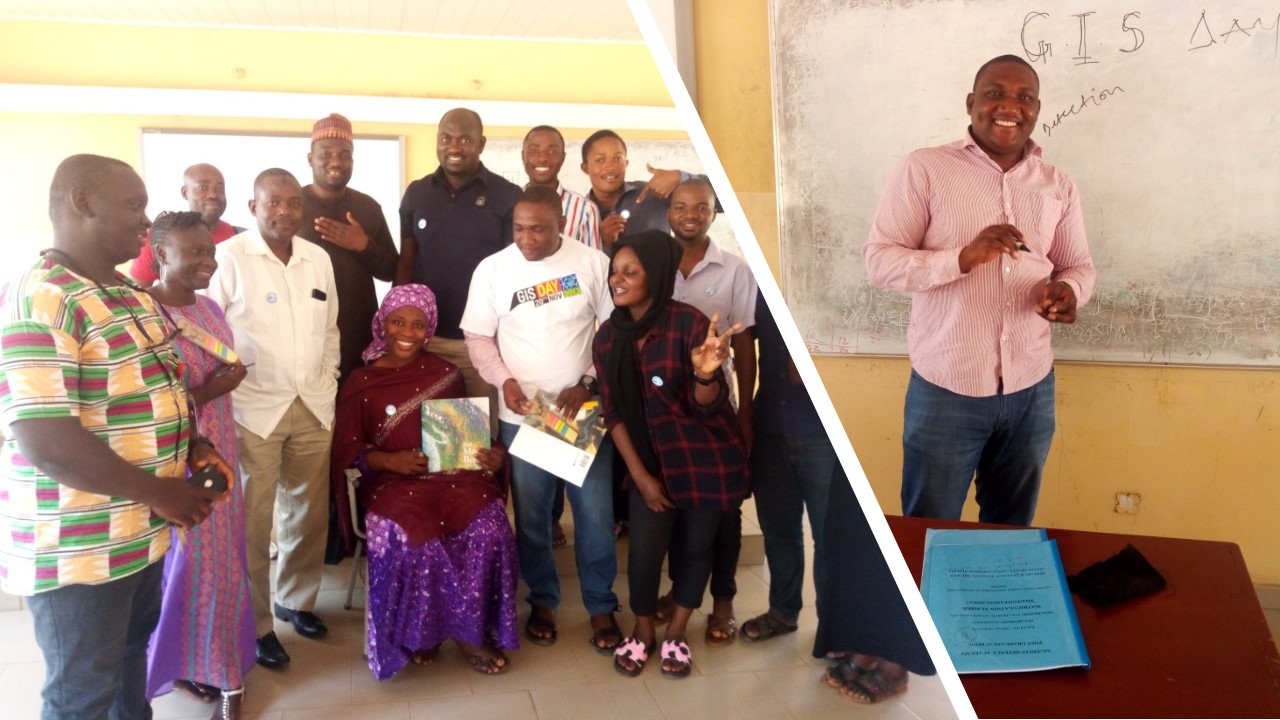 The Arizona GIS Council compiled the many events happening around the state into a fascinating story map.  The participants in the Oak Hill, West Virginia, event placed their entire set of GIS Day presentations on YouTube.

Like many of you, I was very busy during GIS Day week and loved every minute of it.  I visited four universities in five days, including the University of Michigan, Michigan State University, Grand Valley State University, and Central Michigan University, as part of my team's effort to support and foster deep and wide adoption and rigorous use of GIS throughout academia. It was inspiring to see first-hand how these campuses are using GIS in planning, geography, facilities management, health, Judaic Studies, environmental science, engineering, earth science, economics, language arts, and in many other disciplines.   I was very happy and honored to teach numerous hands-on workshops and give  presentations, including several with my education Esri colleague Geri Miller.  The people we met with are truly broadening the horizons for how GIS is being used to make a positive impact on the planet and its people!

Greetings Dr Wali - Thank you - shukran - for your comment and for all the work you are doing with GIS!

About the Author
I believe that spatial thinking can transform education and society through the application of Geographic Information Systems for instruction, research, administration, and policy. I hold 3 degrees in Geography, have served at NOAA, the US Census Bureau, and USGS as a cartographer and geographer, and teach a variety of F2F (Face to Face) (including T3G) and online courses. I have authored a variety of books and textbooks about the environment, STEM, GIS, and education. These include "Interpreting Our World", "Essentials of the Environment", "Tribal GIS", "The GIS Guide to Public Domain Data", "International Perspectives on Teaching and Learning with GIS In Secondary Education", "Spatial Mathematics" and others. I write for 2 blogs, 2 monthly podcasts, and a variety of journals, and have created over 5,000 videos on the Our Earth YouTube channel. Yet, as time passes, the more I realize my own limitations and that this is a lifelong learning endeavor and thus I actively seek mentors and collaborators.