However a colleague of mine pointed out that if you looked at the attribute table of the footprints for the referenced mosaic dataset (e.g. in ArcMap) you only see the rasters that the SQL selection query applies to so it does appear that the query did work. Has anyone else noticed this? Is this suppose to work like this?

It seems very misleading to have all the rasters of the "Master" showing up in the referenced mosaic dataset when looking at it's contents in ArcCatalog when you would think only a subset would show based on the original SQL query.

There are too many caveats in the topic, can you identify specifics of what you did

I have a Mosaic dataset in a filegoedatabase with 24 rasters in it. I ran the Create Referenced Mosaic dataset tool with a SQL query filter where OBJECTID = 1.

Hope that clears it up a bit

just a hunch which I have seen in other sql dialogs... don't type anything, but do selections of the inputs, the operand and use get unique values to provide the list.  I suppose you are sure that all 24 are actually there outside of arccatalog and not just the original layout 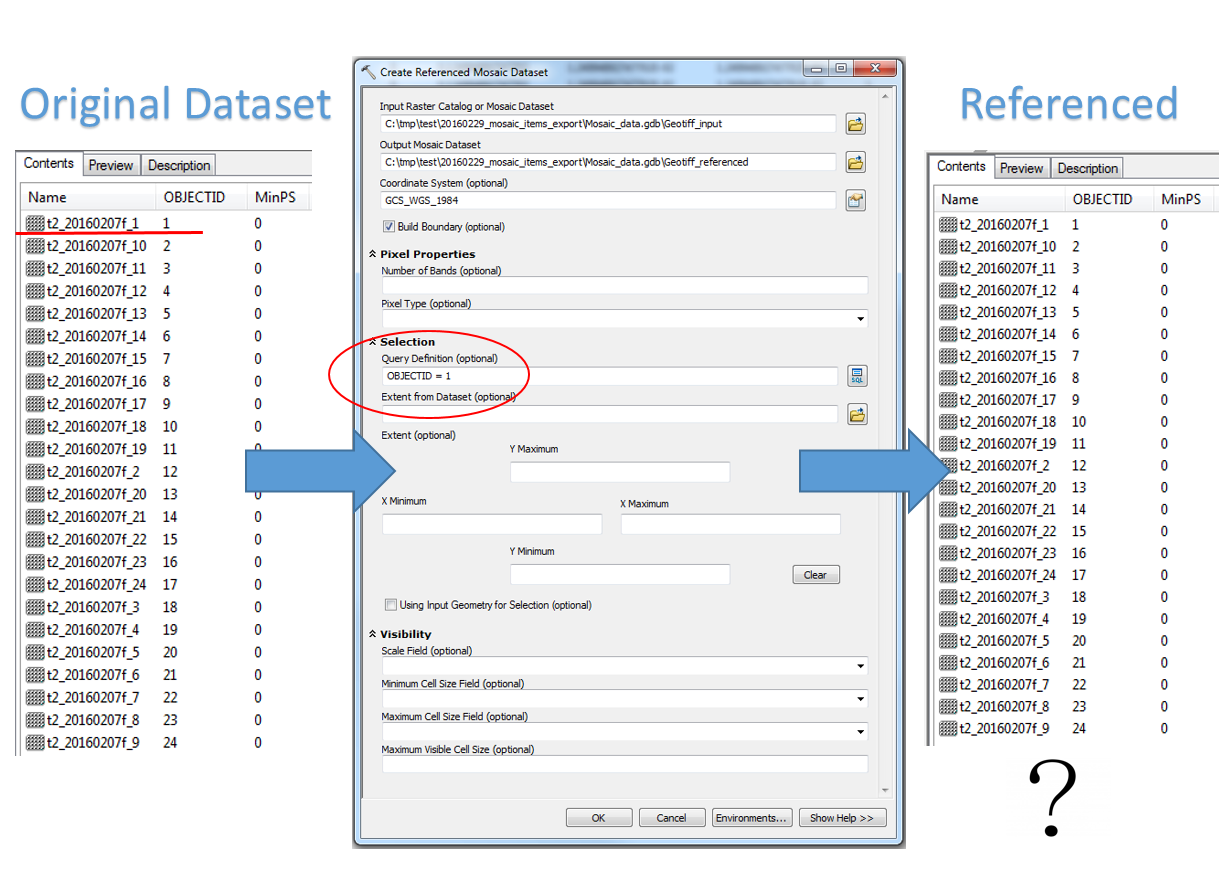 The odd thing is that when you add the referenced mosaic to ArcMap and look at the footprint attribute table it only shows the one raster (which was selected via the SQL Query). See image below.

So in effect the referenced mosaic dataset is working as intentded but it's just the contents view in ArcCatalog that is misleading in my opinion but I don't know, I didn't design the software so I don't know if it is meant to be like that

I don't know, but it may be worth passing this information on to see if it is by design or not.

Did you ever find a solution to this? I'm experiencing the same behavior with my referenced mosaic datasets, which is causing problems further down the line in my workflow.

Hey Aaron sorry for the very very late reply! I don't log on to Geonet very often and I must have missed the notification about your reply.

To answer your question I have not found a solution to this. I just work with it like it is, perhaps it's been fixed in the latest version of ArcGIS desktop / Pro. I'm still using 10.3.1 but will be upgrading later to 10.5.1.