I have a dataset with shape files (lakes), associated near a point (city) that I want to run through the near tool, to organize them by distance from the city. I run the near tool, and for whatever reason, the lakes that are closest to my point file are shown to being the furthest away. After converting the meters to miles, one of them should be it's less than a mile from the point, but it's labeled at being 29 miles away.

Does anyone have any suggestions as to what's going wrong here? They're all in the same projection.

The Near tools does behave normally unless something is wrong with one or both of the datasets.

Generate Near Table—Help | ArcGIS for Desktop

assuming you have the correct license

Everything is in the same coordinate system (NAD_1983_UTM_Zone_14N) and in meters.

strange... a picture might solve one and the conversion from meters to miles the other.  so try without the conversion and do the near table if possible

Whenever I run the analysis, it always spits it out in meters, and then I calculate a new field, using the equation. I don't generate the near analysis automatically into miles. Unless I misunderstood what you're advising. Even with it spitting the results out in meters, lakes that should be 29 miles away are referenced as less than one, and of course vise versa for the ones that should actually be close by.

Ok so it is spitting out about 46671 meters in the distance field for the 29 mile feature.  So I would like to see a visual and the results of the generate near table, since you have the option to spit out the coordinates and direction of the nearest feature.  In that fashion, the results, numerically, could be interpreted in terms of the map.  Once the metric case is confirmed, then the unit conversion to miles can take place.  If the metric case is in error and can be confirmed in tabular and in map form, ... then you have uncovered a bug 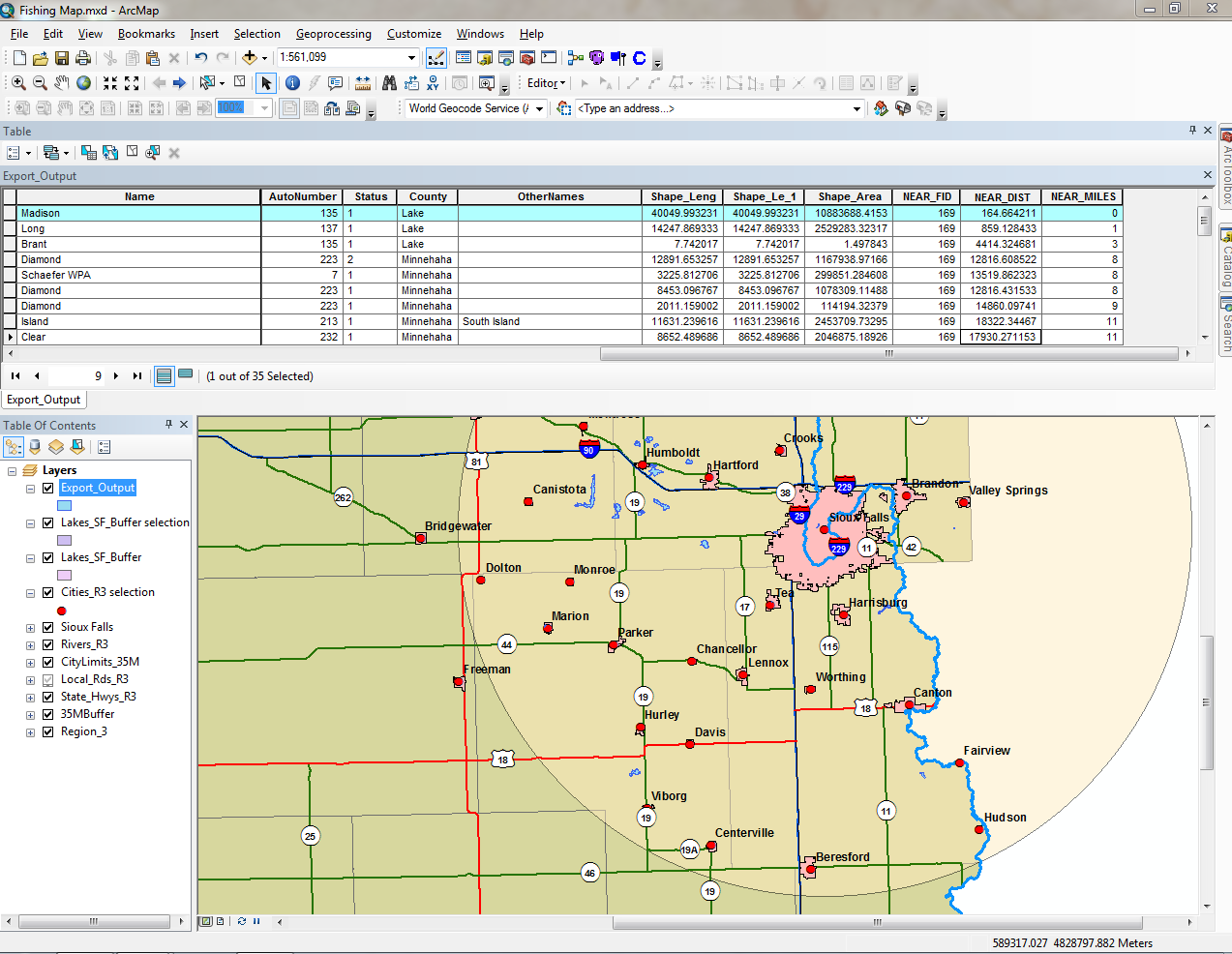 Here's what I'm seeing. The first entry, should be approximately 30 miles away, and as you can see, it ends up giving me 164.66 meters away from the source point. I'm completely confused by it. Note that "Sioux Falls" is the source point, and is found in the middle of the big pink shape file.

the blue squiggly is about the right distance Sioux falls.  The Madison is the highlighted record is in a layer coloured in blue but I don't see it.

I figured it out. My source point was made from a larger dataset, using the "make layer from selected features" function. Somewhere along the line, the data became corrupt and it was no longer honoring my selection where it should have been. Resulting in an erroneous source point, that was nowhere near my desired one.

Thanks for assisting me through it Dan!