Copying domains from one GDB to another

Does anyone know a good method for copying domains from one geodatabase to another? I feel like this should be a quick and painless task.

I had this same issue. I was developing the schema in an FGDB, and I assumed you could simply copy and paste the feature class over to SDE and the domains would transfer over as this way would work with ArcMap.

For a workaround, I did the following steps:

-  Import XML workspace document into SDE, this will also transfer over the domains

Another option might be to use a combination of List Domains and Create Domain to copy and create the domains.  These tools are available in both Pro and Desktop.  There are some related tools mentioned on these help pages that work with the range or coded values.

You can use Copy tool (in Data Management toolbox) to Copy the Geodatabase with domains to a new geodatabase:

Or, use the Copy tool in dialog: 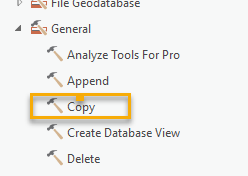