Is there a way to set a geopoint map to read only base on an answer from a previous question?

Basically, I have number of know sites where if the user selects the location as a 'known site' form a drop-down, I pulldata to obtain the coordinates and place the geopoint at the known location. If the user is not at a designated site they select their location off of the map.

This is a web application and the issue occurs when the user selects a known location and scrolls down the screen to the next question. During the scrolling process if they are over the map feature their point is moved with out them intentionally doing so.  If I set a relevancy for the geopoint, the pulldata does not occur and the geopoint is not placed in the correct location.

Are you familiar with the ability to use expressions in the read-only column of a geopoint question? (Must use Survey123 Connect)

There is mention of this in the documentation found here...

Let us know if this is what you are looking for.

Thank you. Yes I had some awareness of this however every time I had attempted to put anything in this box other then 'yes' I would receive the error message "the value you have entered is not valid".

I was able to just copy and paste my expression into the box then ignore the error message by clicking outside of the area. This appeared to work for the Connect app, However it does not appear to be working on the web application. The web applications is where my users will be primarily accessing the survey. 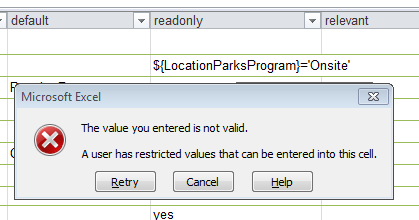 This is likely due to the fact that you originally created this survey with a version that did not yet support expression in the read-only column.

As for the web app not honoring the expression, you are correct in that it is not supported at this time. We do have an open enhancement in our backlog and I will be sure to add your use case to it.

It appears this is working for the desktop application. When I access the survey through the web application, the read-only function does not work and you are still able to make adjustments.

Would the old form be causing this issues or do I need to look at something else?

That answers my question. Thanks again.