Ability to put buttons next to each other

When including multiple buttons in a section of a story, the button content block only supports vertical placements (e.g. one button on top of another). It would be great to have the option to place buttons horizontally (e.g. next to each other) for a cleaner UX.

Thanks for sharing this idea. We have discussed this, but would like more information about how this would be used specifically in a story.

Could you please provide a little more about this use case? What is an example where you would use buttons next to each other? How many buttons would be required for your use case -- is two enough, or would three or more be needed?

I think for situations where you may want to include options, yes vs no, android vs iOS, etc. It would be really nice to have a side by side button capability, rather than vertical stacking. Here is an example of something I am working on where I believe a horizontal layout would look better. At least 2 buttons side by side would be great! 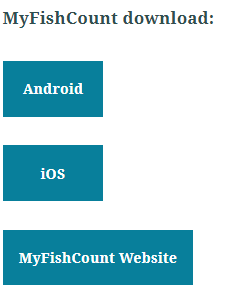 I also think that this would be a nice option to have, for both aesthetic reasons and a better use of space on larger screens (less scrolling). Perhaps a new widget for a "Button Group"? It could have vertical stacking, horizontal placement, and maybe even a grid layout option for if there are many buttons.

The vertical stacking of subsequent buttons (the way it is now) is great for mobile and should probably stay like that, but horizontal and grid layouts that only appear when screen size allows would be wonderful.

Edit: I'll add that one of the most common criticisms I hear from our staff and readers for StoryMaps in general is the amount of scrolling involved. Personally, I don't quite understand it, but I hear it a lot. The way buttons stack now isn't very space efficient on large screens, so any little thing to help reduce the amount of scrolling would be nice for those folks.

I support this idea too. Sometimes you will have several 'call to action' links at the end of a story, and it would be much nicer if we could add buttons in a horizontal row or a card gallery. Listing them vertically creates a lot of white space and additional scrolling. It can also give the impression that they are listed in order of importance.

This could also be resolved by my idea to Add links/buttons to images in a gallery card.

Hi, I am also looking to use buttons in a horizontal row. My example is in creating a "donate" button, for my organization to raise money. We have different donation-priced buttons for people to click. It does not work well aesthetically to have them vertically.

Has this issue been resolved?

This issue still hasn't been resolved. The only way around it is to have multiple links in normal paragraph text. Doesn't look as good or stand out on the page unfortunately.