Our team is trying to use Arcade to do some data updates without success and I have reduced the update to be the simplest possible. Basically, this is to copy the data to 'notes' when this field changed. I am on pro 2.7 and I am using file geodatabase. Could anyone see what is wrong with this arcade expression or do I need to configure something for update via arcade? Thanks in advance for any helps! Following are the screenshots of the error we received and the arcade expression. 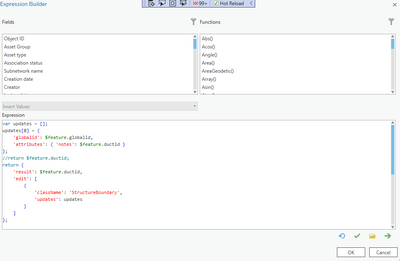 if you're using attribute rules, a simple arcade query like this works: 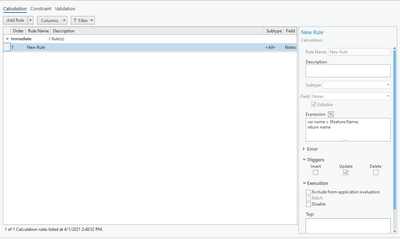 and make sure to set the trigger as update

Thanks, @SarahHartholt . This will work if just returning some data. The problem for us is that we need to update some data from the attribute rule.

I don't think I'm understanding what you are trying to accomplish then. Your original post makes it seem like you want to pass a value from one attribute to another. i.e. when someone updates the comments field, it also updates the notes filed with the same text. Can you add some more context?

Oops. I did not see that your rule is applied to "notes" and the value you are returning is the name. So is that right you script will update the notes field from the name as long as anything in this feature is changed? What we are trying to accomplish is to use the "Edit"/"updates"  payload from arcade to run the update. Our real use case is more complicated than this. We will use the association to update the attributes in different features via querying the association of the features. We have confirmed that we could get all the data well but the update fail. Do you have a simple general example that I could check that use the approach like this for update? 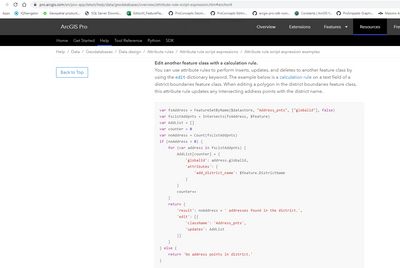 Thanks so much, @SarahHartholt. I have tried your first example and it works great for its use case and it also helps me clarify some concepts! For your second example, I am wondering how do you define the attribute rules since the trigger and receiver are different. I guess you will need to define the rule for "watermain" on "coordinated_ID" to receive the change. How do you define the trigger from Centreline_Assets? A screenshot of your rule definition like in your first example should help a lot!

I think the key for you is this line which calls the Centreline_Assets layer in my map. (the giver)

it is telling the expression to look in the map document ($datastore) for a layer called Centreline_Assets, and to grab the Coordinated_ID field in its attribute table. 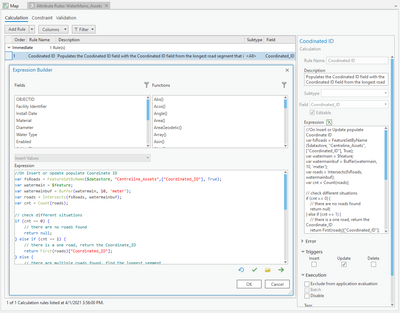 A change to any attribute in the watermain layer triggers the arcade expression to execute. I'm not sure if that also includes changes to the geometry/shape of the feature though.

I'm not sure if that is possible. Your trigger would need to be on the Centreline_Assets layer but the field to update would be on the watermain layer which is not something you can select from the Field dropdown