Trying to use a treeview with checkboxes in a dockpane

I’m currently initiating myself to the development of ArcGIS Pro version 2.7, the WPF and the MVVM approach.  I’ve been developing with ArcObjects and VB.NET for the past 14 years.

Right now, I’m simply trying to replicate the code from a windows application where we see a treeview with checkboxes.  The code for that project can be found here: https://www.codeproject.com/Articles/28306/Working-with-Checkboxes-in-the-WPF-TreeView

The end result is an application that looks like this: 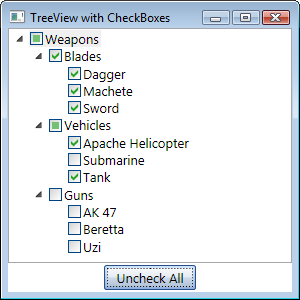 And for example, if the user unchecks the Blades checkbox, all the childs (Dagger, Machete and Sword) are then unchecked.

I then tried to do the same thing using ArcGIS Pro SDK by creating a dockpane that does the same thing.  I had to adapt the code so that I was using PropertyChangedBase instead of INotifyPropertyChanged and also adjust the WPF because in a dockpane we are using a usercontrol instead of a window.  In the end, I’m able to compile the code, but once I run it, the dockpane is displayed, but I don’t see the treeview in itself.  I did debug it and I can see that it does not behave the same way under the dock pane than under windows.

So the question is:  Is it possible to use that type of treeview inside a dockpane?  If so, is there an example of it? It not, is there an alternative to being able to display hierarchical data?

I confirm that I can use a regular treeview without any problem..  But a treeview with checkboxes is a different beast.

Especially if I click on a parent, I want all the child of that parent to follow the same pattern.

I've joined the code in a zip file.  It is basically the same as the one in the project https://www.codeproject.com/Articles/28306/Working-with-Checkboxes-in-the-WPF-TreeView