Hi All. I've come across this a couple of times now and was hoping to find out if others have experienced it too. The below screenshots show the data source of a layer before and after copying an ArcGIS Pro project from one folder to another (project already existed in a folder and we saved a copy to make changes to without affecting the original). 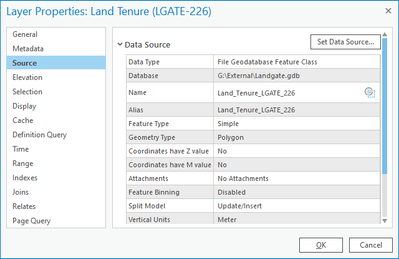 This didn't affect just one layer, but many layers referencing the same folder structure ("External" folder). When we opened the new project, all the layers were broken as the data doesn't exist at this pathway.

Repairing the data source on one layer fixed it, but I'd like to know why they changed in the first place. The folder the project was copied into was a couple of folders further down from the one displayed in the second screenshot (W:\2020_2021\Custom Map, Data & Report Requests\2021-02-23_DanMaples_NFPostHarvestArcProTemplate\Working Folder).

Confirmed. Using the Save as method maintains the Pro project integrity.  That's a good alternative to the package project option.  Good thinking!

Did you copy the project using the OS file utilities?  If yes, then take a look at the path names in the new location.  White space and special characters.  Generally, GIS doesn't like these and sometimes may not recognize a path or must escape/replace the unrecognized characters in the path.  When you repaired the paths, behind the scene the escape/replace process was probably done for you.

If your objective is an exact duplicate of the project and the data in the project, suggest using the the package project function in Pro and refrain from moving Pro projects around using OS file management tools.  Otherwise you'll risk either (1) copying the "front end" components of the project while it's still dependent on and reading/writing back to the original source data or (2) breaking the project structure and dependencies within the project.

TIP:  When working with GIS data, stay within the GIS environment as much as possible.  Refrain from using OS based utilities whenever possible including file/folder utilities.

TIP:  Use CamelCase for your directory structure.  Refrain from using white space and special characters in paths.

TIP:  Keep your paths as short as possible.

Yes, I was a copy/paste of the .aprx using the windows OS tools. Thanks for the tips. I have come to understand the links that these projects have to default/home databases and folders, and how these are maintained when you move/copy a project, but would have thought that data sources to other locations entirely shouldn't be affected. If this is not the case, then surely thats something that should be on the improvement pathway. If it is an acceptable file path in the first instance, it should be honoured and maintained through basic OS functions like copy/paste.

At least for now the fix is easy and I'll keep your tips in mind for future, similar duplications. Maybe opening and going Save As would be the better option.

Confirmed. Using the Save as method maintains the Pro project integrity.  That's a good alternative to the package project option.  Good thinking!