How to define projection of an .las file with an "unknown projection" that I know is actually in MGRS?

I received this data from a company that collected the data. The original data were a .pcd file that I converted to an .las using CloudCompare, as I couldn't seem to find a way to get the .pcd into ArcGIS Pro.

When I added the .las file to my Table of Contents in ArcGIS Pro I realized that it has an Unknown Coordinate System. I know that this file is in MGRS, which I had heretofore never worked with (it took me a while, but I eventually realized "mgrs" is in the file name).

I am attempting to define the projection so that the .las tile is placed in its spatially correct location. However, I see no way to choose "MGRS" as a projected coordinate system when I attempt to define the projection. I have also attempted to perform this action when making an las dataset, by making a PRJ for the file, but this does not seem to help. For reference, I tried following the directions found here: ArcGIS Help 10.1 in the section called "Spatial Reference". I feel like this gets me closer to solving the issue, but I see no way to edit the PRJ file that this process creates... so I am still stuck with an .lasd file that is based off of an undefined .las file. Anyone have a way to do this or a work around for defining a projection in MGRS for lidar data? Am I way off here? I've included a snip of my window to provide some info regarding the .las I am working with.

Thank you so much for your help.

Have you tried it from the catalog pane?  Never had to change one, but you can access information by connecting to the folder with the las file, right-click, properties then explore away.  There is a change coordinate system at the bottom which may work for you

Thank you for your response, Dan. I seem to be missing the ability to define the projection as "MGRS"... when I search "MGRS" in the "XY Coordinate Systems" box, I am unable to find anything regarding Military Grid Reference Systems... Am I off the mark here? Please see two below snapshots. 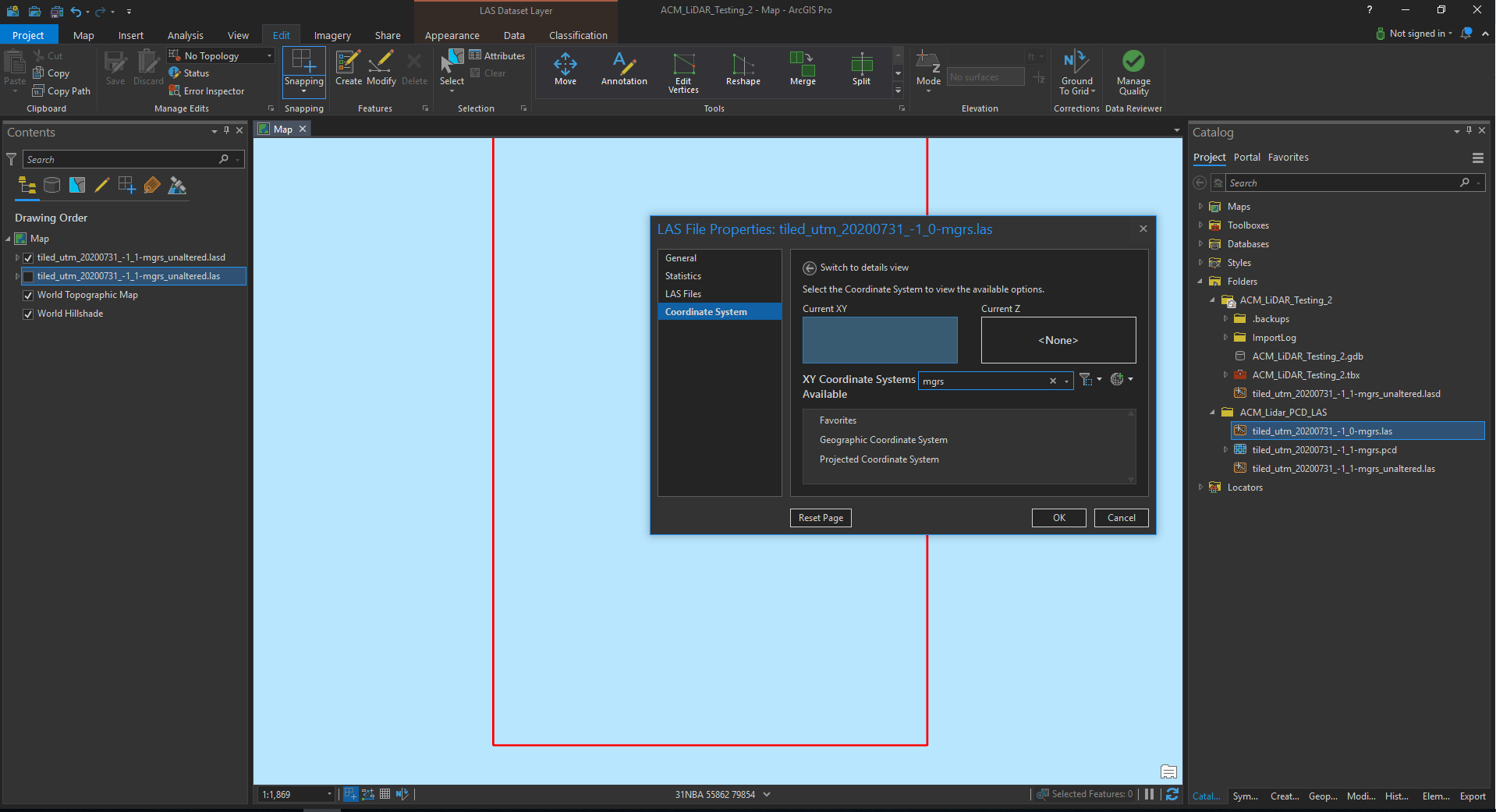 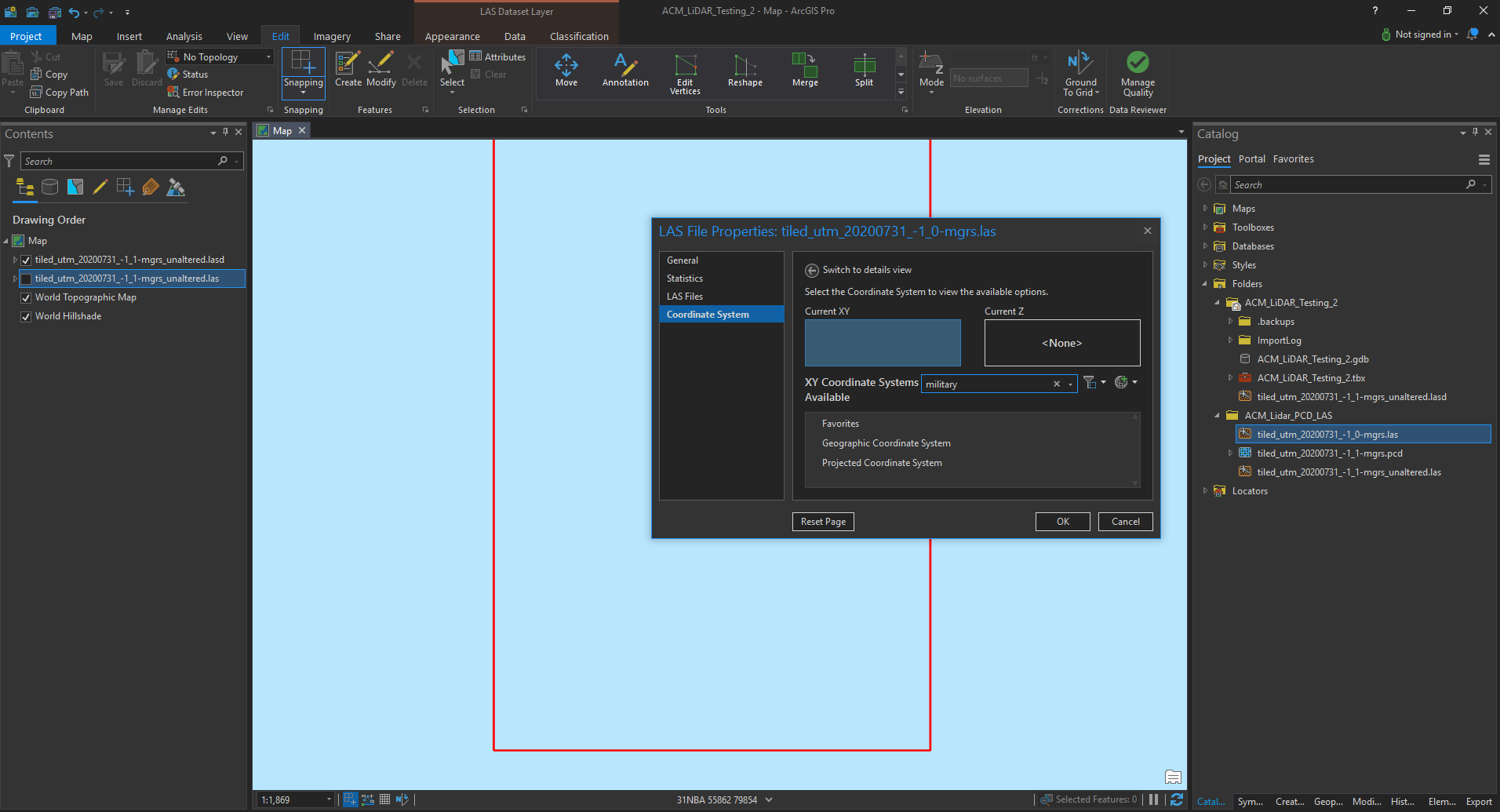 You should be able to Define the Projection - https://pro.arcgis.com/en/pro-app/tool-reference/data-management/define-projection.htm

You can create PRJ files for LAS files with missing or incorrectly defined spatial reference using the Define Projection tool for an individual LAS or ZLAS file or the Create LAS Dataset tool with the PRJ option enabled.

Hi George, thank you for your response. I have attempted using the Extract LAS tool as well as creating a PRJ for the LAS Dataset when using the Create LAS Dataset tool, but neither of these work for me because I am unable to find "Military Grid Reference System" when I try to change the output coordinate system. Please see my above response to Dan Patterson which has two screen shots of me searching for "MGRS" and "Military Grid Reference System" within the "Output Coordinate System" box. When I attempt to define the project as UTM Zone 17N, as I know that UTM is similar / the basis of MGRS, ArcGIS seems to think that the las file is somewhere near the Galapagos (it should be outside of Detroit, MI).

Any thoughts on how to define this as a "Military Grid Reference System"?

Am I missing something?

In the properties section, I would see if you can see the "extent" of the coordinates to confirm that it is indeed in a projected coordinate system, and if so do the extents seem reasonable for a UTM 17N coordinate system.  Something may have gone amiss during the translation process

Thanks again for your help! Please see below of shot of the extent for this LAS tile. I can tell that this is MGRS because these extents are essentially in UTM, but the values in x and y are off by values that coordinate with the MGRS grid that these are based upon. If I set the Map to display units in "UTM" (at the bottom of the screen), it gives values for x and y of 255825 and 0079791, respectively, and says it is in grid "31N", subgrid "BA", which is incorrect. If I go take a look at an MGRS grid for North America (GISsurfer | Military Grid Reference Sysytem (MGRS) Coordinates ), I know that I am in grid "17T", subgrid "KG" (west of Detroit), which is not what ArcGIS Pro seems to think (it thinks it is in grid "31N", subgrid "BA"), and I do not know why it is doing this. Do you have any thoughts?

Maybe you are correct that in the exporting process in CloudCompare I have somehow lost the MGRS header information (e.g. "17TKG") from my coordinates, and ArcGIS is giving me the grid that refers to Earth's origin off the coast of Africa (grid "31NBA")...? Is there anyway to import a .pcd directly into ArcGIS Pro so that I can skip that processing step? 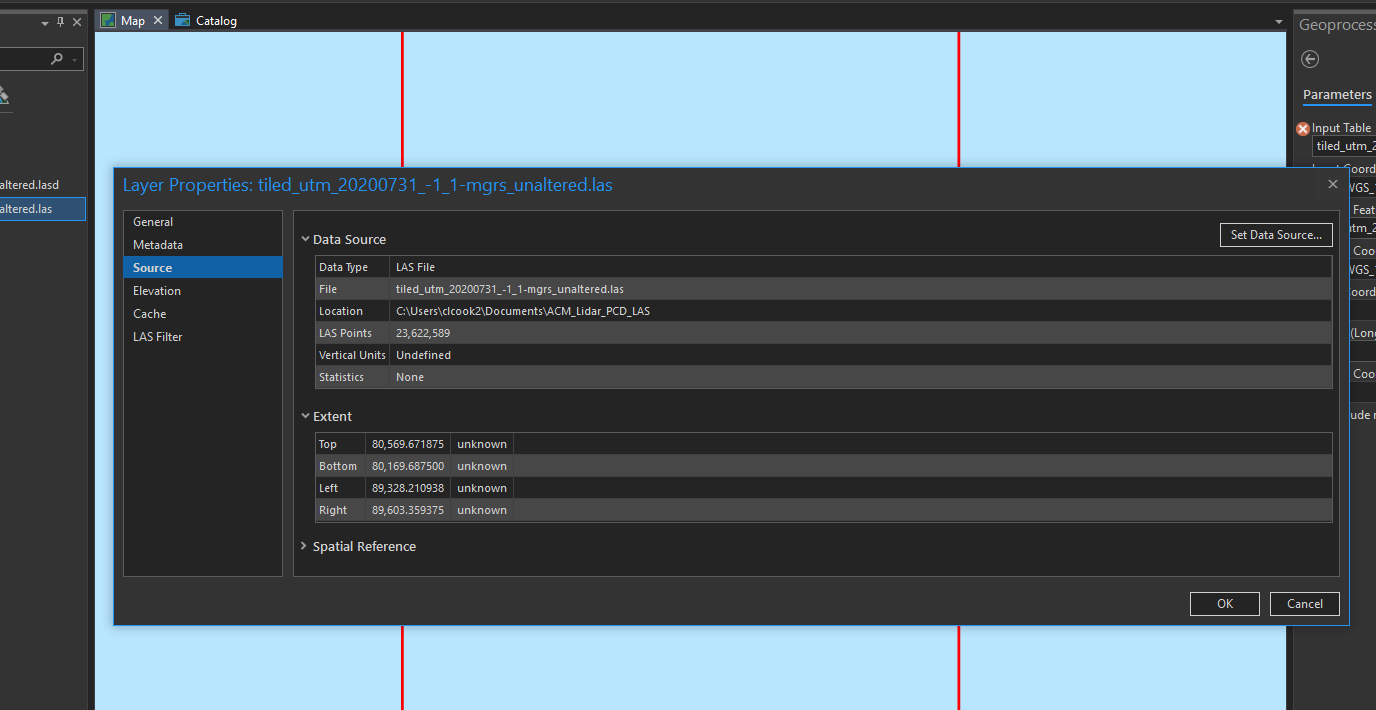 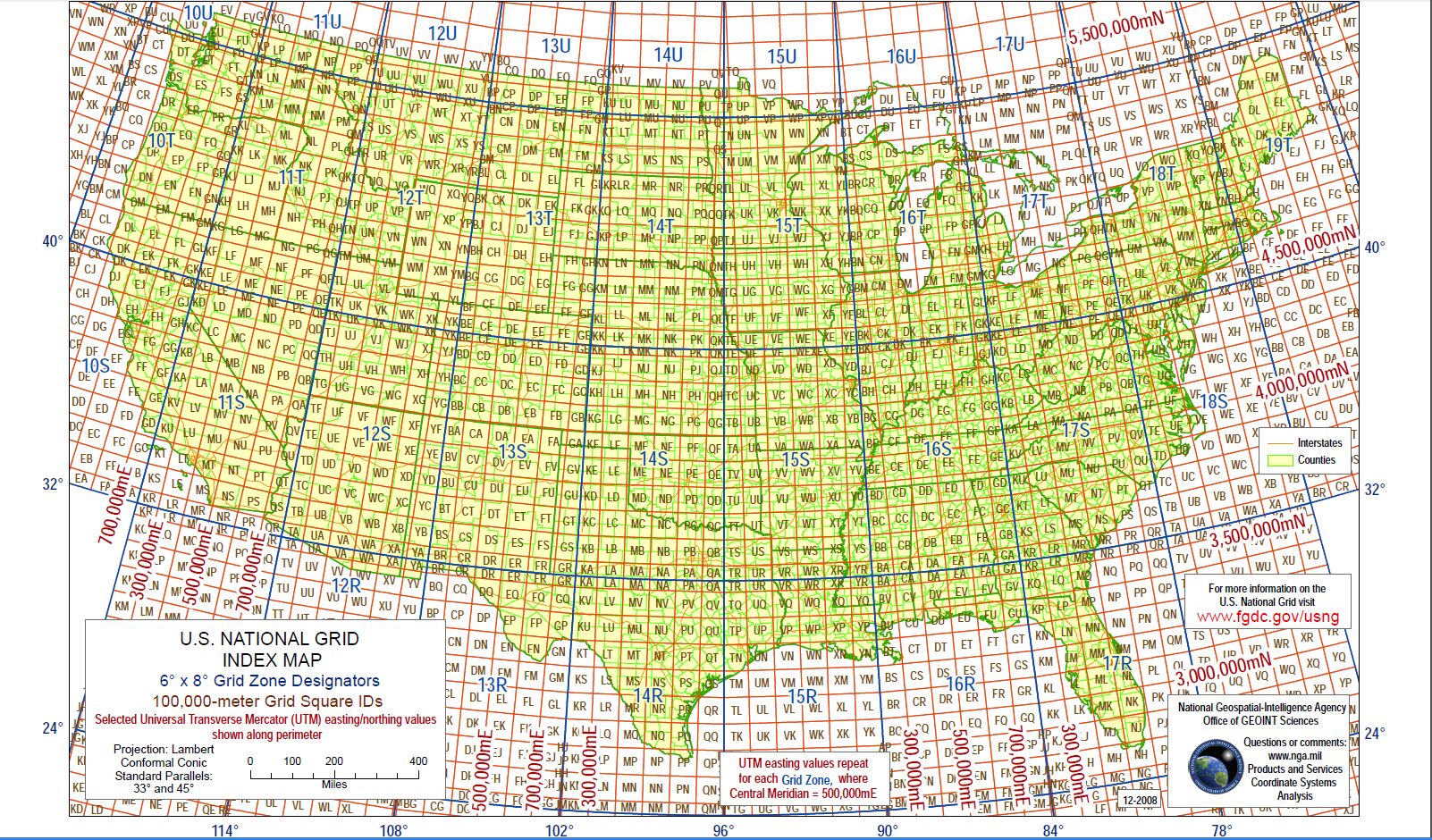 my suggestion would be to go back and export to a well-used projected coordinate system.  Of course you will have to way the export time versus the unknown amount of time it will take to solve this.

Dan, thanks for your help on this issue. I would appreciate any help that Melita Kennedy can provide. I unfortunately do not have access to the original data - I was provided these data  in a .pcd format that is apparently in MGRS by a vendor, and I think that is all that I have to work with. I can convert this pcd into an .las or .xyz or some other format, but I'm not sure that will solve the issue which I think is more related to being in an MGRS format that may be somehow mislabeled (either the original data or during the pcd to las export in CloudCompare).

The problem appears to me be that ArcGIS is not recognizing that this is in MGRS format, or it is unable to place it correctly which could be due to an issue with the transformation to get the pcd file into an las format (is converting from pcd to las not possible in ArcGIS Pro?), and I have no way to define the projection for MGRS in a way that tells ArcGIS which grid cell it should really be referencing... so I feel a bit like a fish in a barrel...

I don't think it's actually MGRS. MGRS is an alphanumeric system for locations. By default, it's only accurate to the nearest meter (+/-0.5, actually a little more) although we support MGRS strings up to mm precision. It might be UTM, which MGRS is based on.