Forcing label items to remain on the same line

I realize my syntax and labeling structure is messy, but it's been getting the job done. The label is displaying a client name followed by their zone and rank numbers in parenthesis. Example: ExampleName (Z:1 R:10) The problem I'm having occurs when a longer client name forces what I have in parenthesis on to two different lines when I have label stacking enabled.

Is there a way to ensure that my information inside the parenthesis always stays together on the same line?

Any help is appreciated!

A less elegant option (without code) would be to simply change the label engine from Maplex to Standard Label Engine by un-selecting the Use Maplex Label Engine under the more options.

This should ensure all labels are on one line. 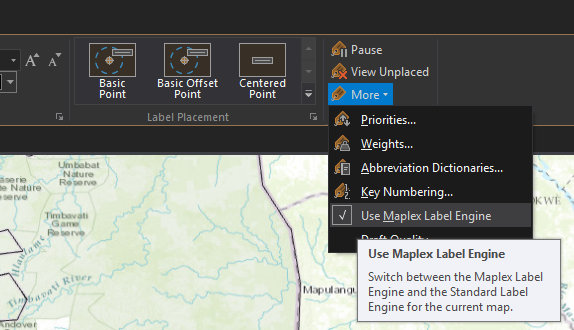 A less elegant option (without code) would be to simply change the label engine from Maplex to Standard Label Engine by un-selecting the Use Maplex Label Engine under the more options.

This should ensure all labels are on one line.

This seems to be solved my issue:

There must be a way to format this in Maplex, but using a line break was creating too large of a break for my desired label appearance. For now, the less elegant option does the job.

This problem may no longer be relevant for you, but just in case it is: the issue is that maplex has the option to specify stacking characters, and the space character is a stacking separator by default, so it splits on any space it sees fit. 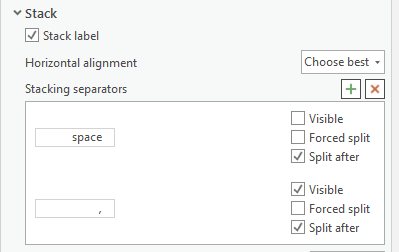 You could remove the space as a stacking separator and choose an open bracket character for example, with visibility on and split after checked off.

You can replace regular spaces in part of your expression with non-breaking space character (U+00A0). For example:

Or if you have regular spaces in your fields and don't want them to stack, you could find and replace them with nbsp in a section:

Maplex will not split on these non breaking space characters.

Or as a third option, you can hard code your new line character, and disabling stacking as a fitting strategy

All the examples above are using Arcade, but will work just as well in any other parser. For VBScript make sure you use + vbnewline + instead of TextFormatting.Newline to ensure you have the correct type of line feed character.