Disable the "Modelbuilder" map group when adding output to display

Every output in ArcGIS Pro 2.8.2 modelbuilder that is marked to "Add to display" gets put into a group called "Modelbuilder". How do I disable the addition of the Modelbuilder group to my map? I've deleted 3 of these groups today. I just want the layer added directly to the map, not inside of an extra group.

We have added a way to go back to the old behavior in the next release. (not 2.9).

The help suggests that the results to add to the display are collected then added, perhaps that is why they are added to a group.  There is no indication if they can be added one at a time or whether this is the design plan

As far as I know, this is by design. Normally a layer group can be ungrouped by right-click the group title and click Ungroup. Does that work on the MB output group?

In the meantime, you can post your ideas at the link below for people to vote.

That does work, although requires about the same number of time and mouse clicks as moving the layer and deleting the modelbuilder group.

Thanks for your confirmation and feedback. I agree with you and feel your pain. I talked to our MB team after I saw your and Duncan's posts; they are considering to "give a way to get back to the original behavior" (quote from Shitij's response).

I hope you can live with the workaround for the time being. Sorry about the inconvenience.

Totally agree with this idea, this is functionality that has been introduced at 2.8 (?) and breaks all sorts of model builder logic. Its awful and we need a way to turn it off!

It breaks my models and introduces unwanted and unintuitive naming logic that breaks downstream logic.

As way of example I have a model that reads featureclasses in a file geodatabase and applies a symbology from a layer file, with the final step feeding that output into a script tool I have created that updates the Range property of the layer using the CIM property.  This all used to work fine without any issue until this new functionality was introduced.

Here is a screen shot of the model to give you context:

Now the problem is with the output of the Apply Symbology From Layer tool which is set to Add to Display.

It adds it into this annoying group and inserts the output name in front of the layer name, as shown below 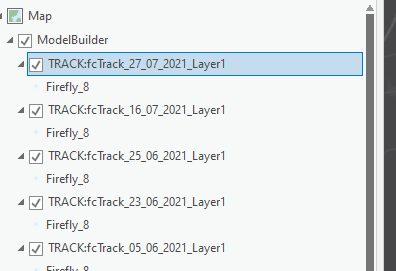 BUT it passes out just the layer name, for example fcTrack_27_07_2021_Layer1 within the green bubble. So the tool is now passing out erroneous information as what has been added to the map is a layer in a GroupLayer with now a completely different name because it has tagged the layer name with the word TRACK:.

Sooooo.... my Set Range on layer script that is expecting just a layer name fails to find the layer because what is now in the map is layer in a GroupLayer with now a completely different name.

This functionality breaks continuity within the model as now you have no idea what is being passed around the model.

This new functionality needs to be disabled/removed/or turned off as a matter of priority.

@PamFroemke1 you should get yourself and any other model builder users voting on this idea to push this up the line of command, this unwanted behaviour is driving me nuts!

I hear you and see the issue DuncanHornby.
Adding it to our product issues to address this and give a way to get back to the original behavior.

Thanks for bringing this to our attention.