We have ArcGIS Pro 2.0, and we are trying to connect to our main SDE geodatabase, but it's painfully slow, to the point of making it practically unusable.

Our SDE geodatabase has 380 feature classes. It's a beast, but ArcCatalog takes just 20 seconds to connect up once, and then it's fast for the rest of the session.

However, in Pro, if we even touch (not double click, just a single click) our large SDE geodatabase connection icon to view the "Details" of the SDE geodatabase, Pro does the progress triple-bar thing for about a minute, evetually loads the Description metadata, but then proceeds to lock up Pro for another minute.

At the UC 2017, I spoke with an Esri employee who stated that ArcGIS Pro 1.4 (and previous) had a bug where Pro would make "hundreds" of calls to each feature class for no functional reason. He then said that this bug was fixed in Pro 2.0, but it appears to still be an issue. He also advised indexing, which I've done (left the computer locked with me signed in, Pro running over night), but it also appears to have no positive effect.

Anyways, our smaller SDE geodatabases work much faster, but you can still tell that Pro has to "reconnect" and gather some data from the gdb in the background. It just seems like Pro has taken a huge step backwards, contrary to advertisements of "64 bit speed", from ArcMap/ArcCatalog when it comes to interacting with SDE geodatabases.

Can anyone explain why Pro is slower than ArcCatalog when interacting with SDE geodatabases?

I would recommend get an https://community.esri.com/groups/technical-support?sr=search&searchId=9f8ac989-b5d7-4344-b24a-905cc...‌ case open and if possible, provide a backup of the DB for testing. Sounds like there may be something else in play.

where sequential upgrades over existing installations finally reached a breaking point.  You may wish to examine the combined history of your machine with all the esri software you use...

Thanks for the recommendation. There have been no upgrades on this machine. It's all fresh installs on a new Win 10 Pro OS.

The part to remember is that ArcCatalog works just fine. ArcGIS Pro is slow. This was also the case with my older Windows 8 OS, with ArcGIS Pro 1.4 and ArcGIS Pro 2.0.

All things begin equal, ArcGIS Pro is very slow with this large SDE connection and doesn't remember connections. ArcCatalog works like a champ.

The network is fast, the database server is fast, everything is fast. ArcGIS Pro is slow with the large SDE connections. This was true on my previous setups and is still true today with a new setup.

Plus that Esri expert admitted they had issues with Pro doing buggy stuff with SDE connections.

Thanks for sharing the solution to your problem.  This information will probably come in handy when my organization migrates our enterprise system from ArcMap to ArcPro.

I got the size from a query Esri support suggested. It went from 60 MB to 25 MB. That means there was 35 MB of GP history in the metadata that got deleted.

I don't know why it takes so long to read 35 MB of data for modern software, but that's the way it goes with Esri software. It can do amazing visual gymnastics with 3D data in realtime, but it takes over a minute for it to read 35 MB of text, essentially. Go figure. 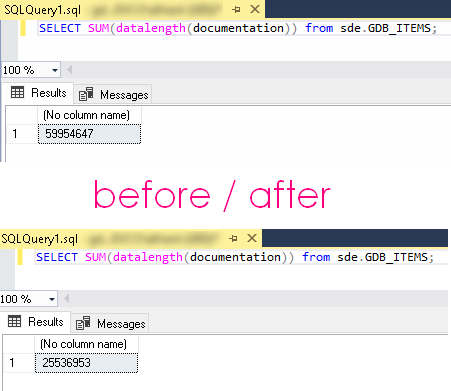 There is a Desktop Add-In as well, in case anyone wants to try that out:

If you look inside the XML under that Documentation field for 'Workspace' in the GDB_ITEMS tables, it will show you something like this: 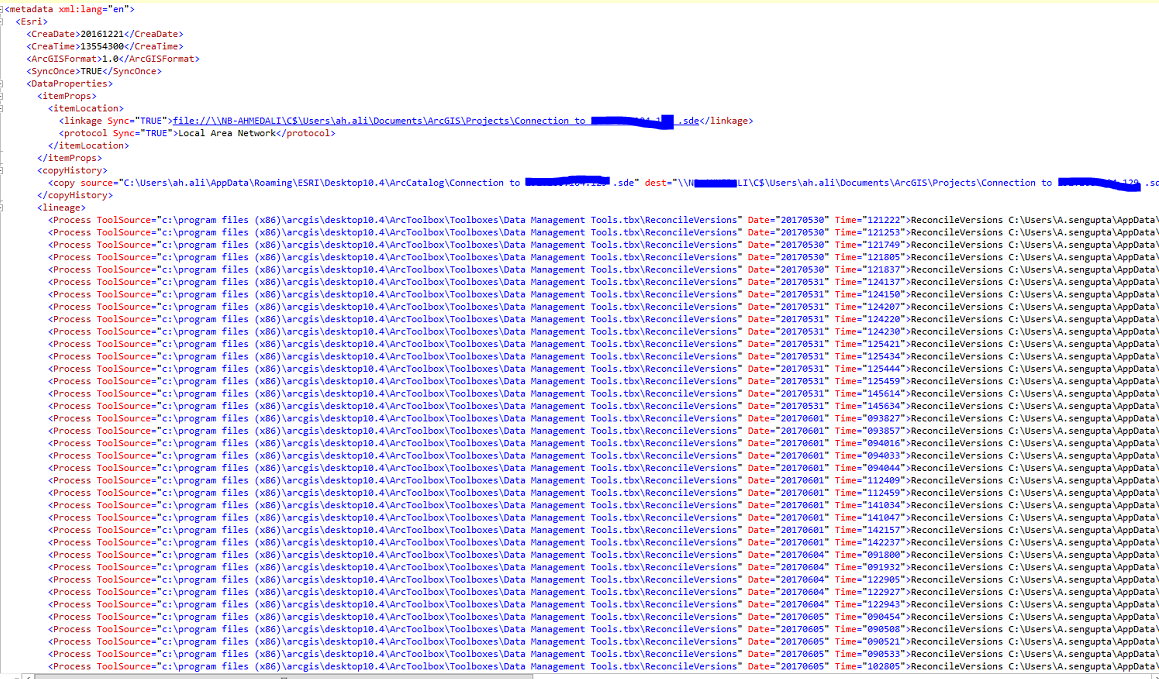 This can become so huge at one point that SQL Server Management Studio refused to open up the XML file in one of the Customer's environment. Clearing the GP History improves the connection speed in ArcCatalog and ArcPro drastically, as you observed.