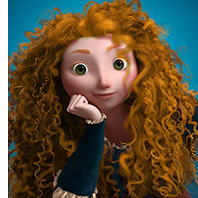 Why can you 'Click to add new row' at the bottom of a feature class attribute table in ArcGIS Pro?  I understand it for tables but not for feature classes.  All that happens is you end up clicking there all the time by accident when editing or even just selecting in the attribute table and adding a new row which is not related to any actual feature (point, line or polygon).

Can we please have this removed from the bottom on feature class attribute tables but retained for tables?

When editing is enabled for a layer, that option is there: 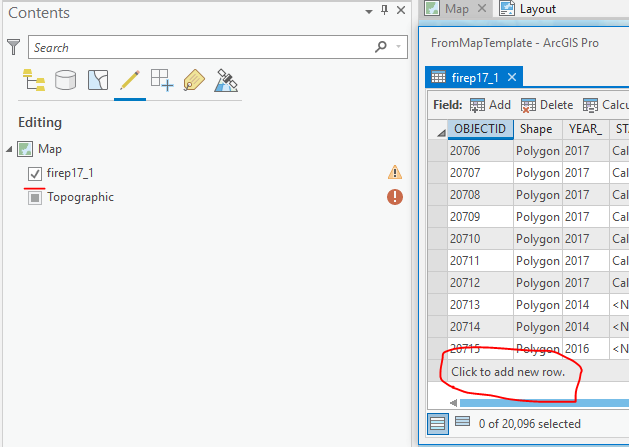 You can toggle off editing so that it won't be there: 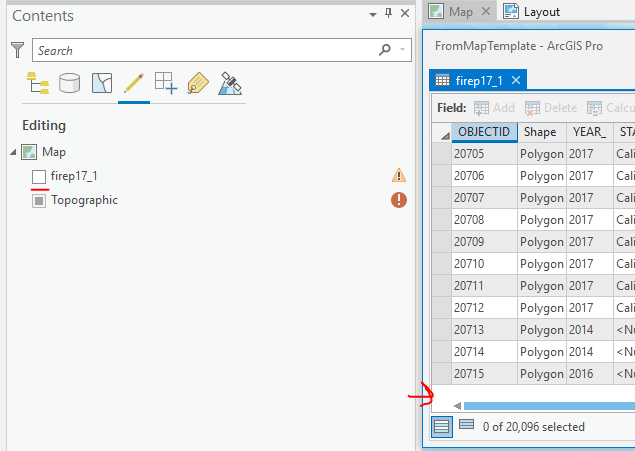 Hi there Kory - Thanks for responding!

Yes I am editing - but when you are editing is when you are dangerous!  Why is it even there for a feature class?  A row in a table without a corresponding feature is a nonsense.  And at least, normally, I am aware of when I add a row and make the effort to remove it - mostly...  But mostly isn't good enough.  In our organisation we have people who use GIS as part of their job but it's not their actual job so they are not as familiar with the programme or the issues that arise when data gets messed up and they won't bother or even really notice when they accidentally add a row.

For a while there I thought that when you saved the orphaned row (orphaned in the sense that it doesn't have a feature associated) it would disappear - but on closer investigation that doesn't appear to be the case.

It just seems like an ArcPro feature that is both not at all useful and actually harmful.

Be good if it was removed.

Yeah, I understand your position, but apparently we've been able to create records with attributes without having a shape for a long time* (*I think - here is my test in ArcMap): 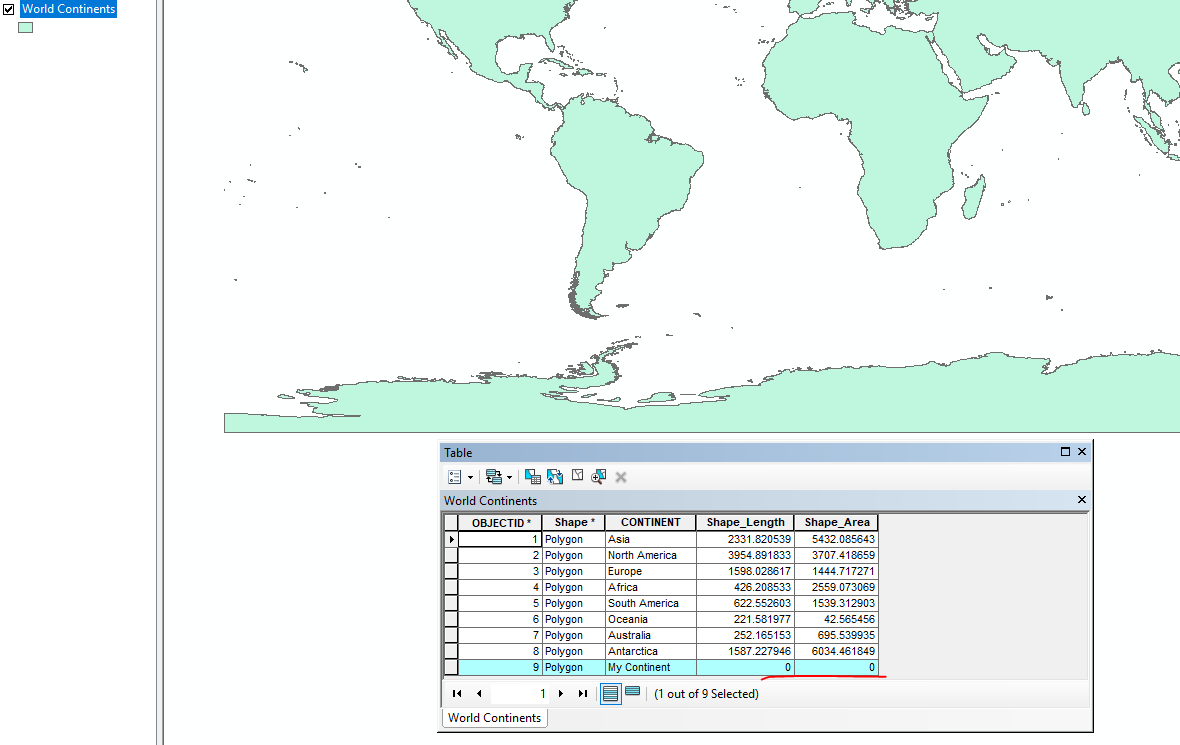 I imagine if that functionality were removed, we might hear from people who have built workflows around the ability to have some users enter attributes, pass the data to others who then create the associated features... usually if the capability exists, somebody has found a way to leverage it

It sounds like the main concern is around unwanted/unintentional edits, correct?  We recently shared a blog on that subject here: https://www.esri.com/arcgis-blog/products/arcgis-pro/data-management/dont-fret-it-just-edit/

This idea is Reviewed and open for voting, but it seems the actual concern is more about edit sessions in Pro, for which there are other ideas out there already:

It seems to me that if either of the above were implemented, it would make this behavior more like ArcMap; i.e. instead of just automatically having the ability to add a record with attributes without an associated shape, a user would have to "enable" that capability first by starting an edit session, or enabling editing on that layer... 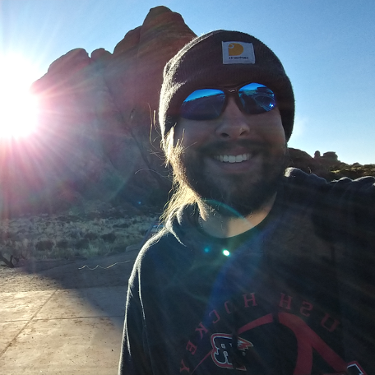 It sounds like the suggestion isn't about simply being able to create a featureless record by accident, but more about how much easier it is in Pro than in ArcMap. In Pro, a single click on that bottom line in the table and boom, new record, no geometry, ready to go. In ArcMap, a single click on the bottom line of the table doesn't do anything. It takes a double-click, or an overzealous copy-paste mixup to add a new record without a feature. I don't see anything in ArcMap where a single click from a standard interface can create a featureless record, but in Pro, as long as you have the attribute table open, you can.

This is very similar to this idea about the Delete Field button. An accidental click in the wrong place can result in a potentially major disruption. It'd be like having your car's "pop the hood" button right next to your radio controls. Not something you want to accidentally press while cruising down the highway!

Yes, that would be scary!

I didn't think about workflows that other people have that require making a record in a feature class attribute table without an associated feature. It wouldn't be good to mess those up...  Wow - so that's a thing?

Yes - if it wasn't so easy to just click on that row - if there was a way that you actually just turn it on if you needed it rather than having it just there constantly that would, I think, solve my issue.

I would love to see the option to toggle 'Click to add new row' OFF. I'm currently working on a project where I need to select coded domains for several fields in a polygon feature class and I've lost track of the number of empty rows I've accidentally created. This is slowing my progress down pretty significantly.

I have never purposely used the "Click to add new row" feature.  I spend a ridiculous amount of time deleting accidentally created rows; I would never just start creating blank rows of data.  The ability to turn this feature off would be very helpful.

ArcGIS Pro 2.6 (planned for release next week) adds the option to have a button to explicitly turn editing on/off.  See the Editing section at 19:40 What's New in ArcGIS Pro 2.6 - YouTube

Just wanted to give a little heads up to check out the functionality when you are able to upgrade to 2.6.

"Click to add new row" is so annoying. I have to drag down the attribute table all the way down so that there is room for only one row. That would be great if it becomes an optional feature.