Often information about your data, processing steps, sources and just other general stuff is stored in a simple unstructured text file, the sort you would open in Notepad.

In ArcPro you neither create such a text file or open it from the Catalog Pane. Below is a screen shot from a project and in a particular folder is a text file which happened to have some text describing some statistics. Other than just see it's presences in the folder I can't actually open it. I need to go to NotePad or Windows Explorer to view it. 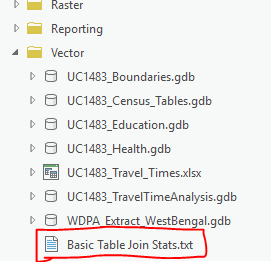 Duncan Hornby‌ I think that functionally, the new idea here is a duplicate of https://community.esri.com/ideas/7837 We already have that tagged with arcgis pro as the concept is still valid for a Pro project.  If you agree, let me know and we'll mark this as a duplicate, and you can add your notes/use case etc to that one.

Having read that idea (and I had also voted on it,

) I feel its very similar in what it wants to achieve, i.e. be able to write notes down, instructions, advice etc. But as I read it it is asking to have the notepad facility "in house" as part of the project? I've seen this approach in other software like Minitab, it has a report section, which you can copy and past results in, document etc, but importantly it is part of the minitab project file, not a separate document.

I'm asking for ArcPro to be able to open a text file or create one. A work around is for a developer to create an AddIn button but I think this should be core ArcGIS Pro functionality and not some 3rd party development.

Since the time you posted this, I think that the pop-up file path functionality was implemented.

You can click the Path from the .txt file's pop-up and it will open the Window's folder where the file is stored, then open it from there.

I understand this still isn't quite the same as double-clicking the text file to open it, but wanted to make sure you were aware of the current functionality. Thanks.

We do not plan to add this functionality – in ArcGIS Pro, a file with the *.txt extension is already being interpreted as a comma delimited table file, and can only be associated with table related operations (and not with operations for unstructured text file).  Besides what Kory mentioned above as a workaround for your need, you may also want to consider entering in the folder’s metadata your notes about the content of this folder, the results of operations you have performed on the content of this folder, and so on. To enter your notes in the folder’s metadata, select the folder in the Catalog view, and click the Edit button on the ribbon: 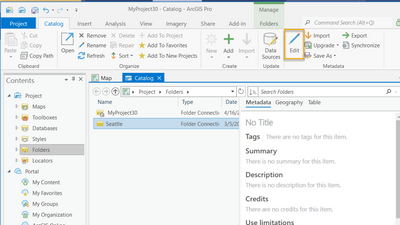 If you prefer, you could use just the Description field of the folder metadata to enter your unstructured notes.  For more details about how to use the metadata editor, please see https://pro.arcgis.com/en/pro-app/latest/help/metadata/view-and-edit-metadata.htm .