I recently published three layers from ArcGIS Pro​ (1.3) to my ArcGIS Online​ account. The first two came in fine. But the third did not show up. When I tried to access the table from the third layer, it gave me the error message of "Accessing data failed".

The 'funny' thing is, the data source for the second and third layer is exactly the same. Could this be my issue? I don't know why it would matter, but who knows...

Adrian Welsh​ thanks for sending the sd file. Confirmed it's an issue with the field length. Unfortunately the only workaround really is to publish with shorter field names (32 characters or less) . This will be fixed on the Online side in the next release (currently planned for September). There also seems to be an issue with this in Pro with shortening the field names when publishing (essentially both Pro and Online should automatically truncate the longer field names but didn't in your specific case).

This info was sent over to the support analyst you talked to - they're writing these issues up, etc so you'll likely be hearing from them soon.

I think for some reason it is turned off... 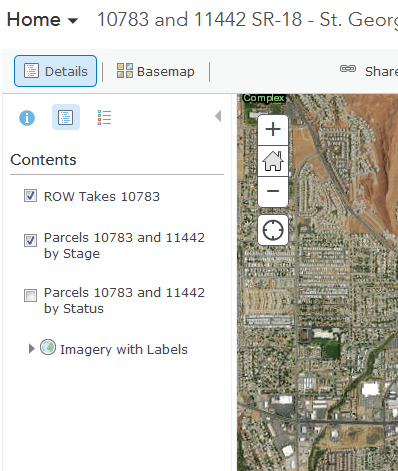 When I checked it it showed in the legend.

EDIT: Scratch that..the table gives me an error too.  Have your checked whether there are any records being returned?

Thanks for checking. I had it turned off initially. I tried having it turned on and other combos, still same result. How do you check about records being returned in AGOL?  I don't see anything when I check it on, if that's what you mean.

My guess is to look at the developer resource traffic (fiddler, etc).  I did test a query again the service, and it is returning data

even if you say json.  I can't remember how to get it to spit out attributes off the top.  It does seem to have the goemetry sinc eyou can zoom to the extent too.  Head scratcher for me (but also didn't spend much time.)

the GET query line...

That's interesting that it is returning data yet also throwing an access error. I am not sure what that means.

When I access the service directly and try to view it in a blank map, it does not show me anything (for that layer).

I'll keep messing around and maybe use Fiddler on it (recently Kelly Gerrow​ showed me how to use this and it's pretty awesome!).

I was poking around some more and found that something similar to this has occurred a few times with no real resolution, that I can tell.

This thread had the error but seemed to get around it by trying the table again immediately (which didn't work for me):

AGOL: Attribute Populates in Table, Doesn't Show in Pop-Up When Selected as Parameter

This thread saw the table initially but then it was lost when trying to access it again:

This recent thread is having the issue after using Survey123. Though it seems to have a similar issue to what I'm seeing:

The most similar case is this thread:

Still, the one thing they all have in common is the error message and no resolution (or any replies)

Have you contacted tech support yet? It would be worth getting them involved since with so many similar problems, maybe it us a bug, or maybe it is unreported AGOL health issue.   Point them to thus thread where you've already down the search for similar issues...might save sound time.  My suggestion at this point.

I also recommend contacting Esri Technical Support​. This service seems to be having some issues returning attributes. Analysts can help look into the issue on this service.

Adrian, the issue is that some of the field names in the layer are too long. Perpetual_Easement_65_value_estimate for example. Usually field names like this are transparently truncated (with the field alias maintained). Pro 1.3 should be doing this but doesn't seem to be in your case. Possible to share the SD file generated in my content when published from Pro? Can send to me @ cwhitmore@esri.com or share privately via group in AGOL (username cwwhitmore).