I have an application created for the purposes of doing geocoding operations. The client-id of this registered application is used by an external application which does the geocoding. It is a server-side script and not used for logins, but only for geocoding.

I am able to see the credit usage in ArcGIS Online for this application. However, I'd like to query and get the same through the ArcGIS API for Python.

I have tried gis.item.usage(date_range='7D', as_df=True), but it returns an empty dataframe, whereas I can see credit usage in ArcGIS Online for the same period.

Is it supported in ArcGIS API for Python or does it currently support usage reporting only on views and logins?

If you look at your org's credits dashboard, you'll see that credit usage is only broken down by application type and date.

If you use gis.admin.credits.credit_usage(), you can see that same breakdown:

I am able to see the credit usage in ArcGIS Online for this application.

Is there a certain spot in AGOL where you see app-specific credit usage?

Yes, in AGOL there is a certain spot where we can see credits consumed by the application. Here is a screenshot of the place where I typically see the credits for each application. But I am unable to locate how to get this using Python API. 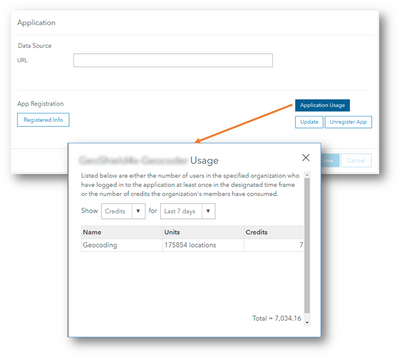 That's very interesting! I don't see anything in the API docs for this, but I may be looking in the wrong spot.

Can you open your browser's developer tools (Ctrl + Shift + I on Firefox) and watch the Network tab when you click to request the credits usage for the app? You should be able to see what kind of URL request is being sent, which may help narrow down where to look for this.

Yes! it is quite a useful feature. I did watch the Network tab and looked at the URL requests being sent, but could not find an equivalent in the API.

Oh! I missed this bit on item.usage():

I do see that when I try item.usage() on a locator service, the dataframe is empty, regardless of whether or not it's actually been used in the timeframe specified. It feels like you may be in Bug Report territory on that point.

Beyond that, though, I find it curious that the URL request is being made using the appID and not the ItemID from your content. And that the button appears in the Application section of the settings rather than the Usage tab.

Prior to the usage URL request, it looks like the ItemID is used to get the registeredAppInfo...

So, looking at the URL again. The usage request is happening at the portal level, with the appID being given as one of several variables.

Unfortunately, the /portals/[PortalID]/usage item is missing from the documentation, so we can only really guess how it's supposed to work. Nothing similar in the Python API either. 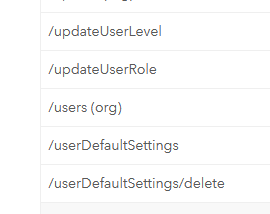 For now, I think you can still accomplish this by utilizing the requests library.

The output of response.json() will be something like this:

Which you can easily bring into something nicer like pandas.

Give this a try and let me know what it looks like when your app actually has credits to report. I get an empty dataframe, but in my case, that is accurate.

Josh, apologies as it took me a while to respond and thank you for your suggestion!

I was hoping that we should be able to do this by the ArcGIS Python API, but sadly it looks like it doesn't support it yet.

So yes, for the time being it looks like we will have go with writing our own custom code, and you example is very helpful. Thank you so much!