bug: popup outline is mis-shapen in ArcGIS but works fine in 3.25 sandbox

The original thread above I put in JS API initially based on my first experiences with this bug. So it is ok to delete the first one.  However, it appears to be more a function of a bug with ArcGIS Server 10.6.1 or what runs AGOL.

The bug:  Add a polygon layer to ArcGIS  in a web map. Enable its popup, and click it. The outline is way off and misaligned and warped in shape, as shown below.  Esri TS has reproduced this, and assigned bug ID is # BUG-000115968.

Although it works fine in the 3.25 sandbox  (as in this example). Thus it would seem AGOL introduced some sort of geometry simplification and/or projection issue with the July 2018 AGOL update.

One solution Esri could use to fix this, would be to simply re-draw the feature halo on a 'zoom-in' event, so that the geometry could be simplified at small scale and re-drawn with more vertices if zoomed in to.  pseudo-code: IF zoom-in event THEN re-request feature geometry via json and progressively request more detail and vertices. And perhaps with a minimum cap. If it's a simple property with a dozen or two vertices, no need to ever simplify, just request them all once.

This happens with a simple web map and even with a layer in web mercator.  I also saw the effect on services from our 10.51 and 10.61 servers, both from SDE in state plane and a GDB in web mercator respectively, in poly layers in web maps.   This would cause an end user to not trust the spatial accuracy of the entire platform.  If someone clicks a property in a viewer and the lines get warped, I will be getting calls. Fortunately our current viewer uses Robert's eSearch which does not have this problem when highlighting a feature(s) geometry.

Tech Support has simply said it is submitted and can't say more; our rep said it may wait on 10.6.2.  I hope this can be elevated to the uber ninjas in dev team. I asked Tech Support and they said to use Elevate in My Esri but that button is ironically literally missing. 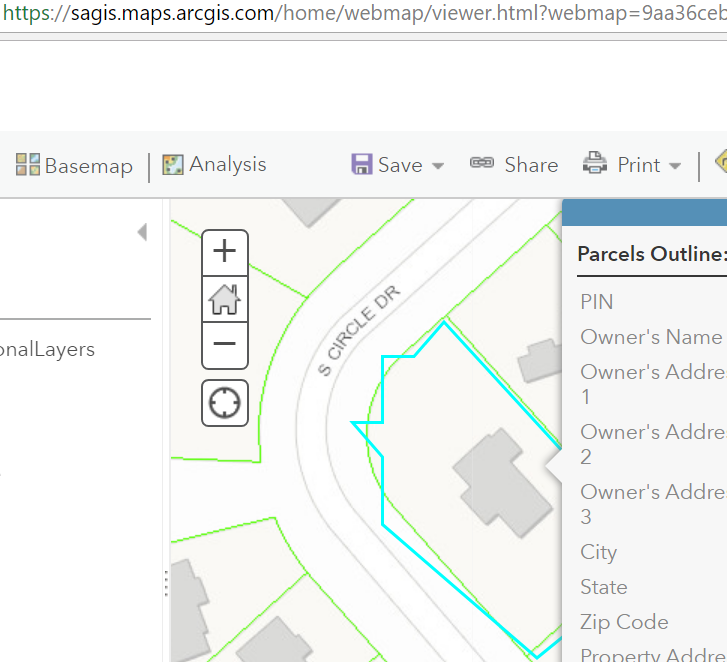 note: this was when adding it as dynamic mapserver.

Before 3.26 was out they had had me test 3.24 so I had already had that example (as posted in EAC forum) but had not tested 3.26 yet, and was thinking it was Server. It is curious it never impacted the Sandbox. Must be some interaction between the API and WAB versions.  Thanks both. Have a great day!

Thanks for the FYI. Here is some information about escalating bugs through My Esri:

Please go ahead and follow the steps for an official escalation as this can be tracked and followed up on. I'll update this post when I have more information.

Hi Kelly, thank you for your reply as always!

I noted above the button is ironically missing. It only says Subscribe. Support was not sure why it was not present.

The problem with having inaccurate geometry displayed back to a user... For a property mapping site, it's an issue. It will lead to users questioning accuracy. We were hoping this would be fixed a few weeks given the severity.  I proposed a solution in terms of business logic for how to handle returning geometry at a progressively higher detail above; although with a popup one would think it should never be an issue since it is only one feature except in certain circumstances like multi-part features or large detailed polygons like an entire state. Nevertheless, rendering progressively more detail as a user zooms would seem a good solution.

Thanks for the feedback,

This bug was marked as a duplicate of another existing bug. This is planned to be addressed in the Javacript API (and Map Viewer) in the upcoming September release of ArcGIS Online. Katie Cullen

We're experiencing the same bug in our ArcGIS Enterprise deployment (10.6.1). Though we already have an incident running with our local esri reseller, we're currently down one of the core features of the platform because of this (as an Electricity & Gas DSO with many assets close to eachother "selecting" a feature is something our users do a lot). For now we're hosting feature layers (which won't group nicely in default apps) but it's a huge huge huge issue at the moment.

Do you have any insight in a patch for Enterprise users? An in-place downgrade is simply not possible due to how the platform built-in back-up tooling works...

This will be addressed in the next version of ArcGIS Enterprise. It also is planned to be included in a patch, I believe you have followed up with your distributor, and would encourage you to connect with them for updates.

Kelly Gerrow‌ Thank you. I can confirm that it is resolved on AGOL in web maps now.

However, on my site from 10.6.1 it still is broken.  Example: ArcGIS Web Application  This is from services on my 10.6.1 server: Folder: SagisOrg2018  I understand that AGOL had this bug because AGOL ran on 10.6.1.  When will 10.6.2 be released? This is affecting our production viewers with users questioning spatial accuracy.

Are you using an AGOL WAB App or a WAB Dev App?

Then an AGOL update would not really affect you unless you are using AGOL hosted layers then.