I created a map consisting of four layers.  Two of the layers we use regularly within AGO without any problem.  The other two are subsets of a much larger layer where I used definition queries to filter the data in order to display. In AGO, I am able to see the all four layers without any problem, however when I share the map with others in our team, when they attempt to open it, they get the below “The item failed to load” message (without any other info).  With all layers, I am sharing with our entire org. Assuming the item is one (or both?) of the two large files, what can I do to get the item(s) to load for others to see?  Any feedback would be appreciated - thanks!

It's hard to know what's going on without more information about the map or layers in question.

The fact that you can see it but other users can't would suggest an issue with sharing settings, but you've already checked that...

How are these "subset" layers being added to the map?

I would suggest having one of the team members open their browser's developer tools when they open the map and watch the network traffic. If one of the requests is failing, you may see it there, which could help you identify which layer(s) are causing the issue. 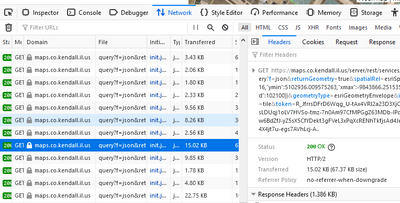 Thanks!  The two layers are subsets of a SafeGraph layer. Originally, I tried filtering in AGOL but had difficulty, so I brought it into Pro and used definition queries, creating two new “subset” layers which I saved / uploaded back into AGOL.

I just had another user open the file which identified the layer that wouldn’t open so I have to figure out why, as it opens with me.

I'm not familiar with SafeGraph. Is the layer publishing from a file or registered server?

If you're truly uploading it to use as a hosted feature layer, have you looked into using view layers? You can put definition queries on individual views that all reference a common data source.

We use views extensively on our largest layer (800k rows and counting), and they work extremely well! Most users/depts only need a few thousand very specific rows for their workflow, so we create a series of views that pre-filter the data down to those subsets.

SafeGraph is a POI data file (5.4M records) on AGOL.  I filtered that file, creating two separate layers: one with 83K POI’s and the other with 8,500.

I think I may have stumbled onto something:  I had 2 different folks (creator licenses) try opening the map.

When opening, in AGOL Classic Map Viewer, the first person got “the item failed to load” message.

With the second person, AGOL had him open the map in New Map Viewer which displayed our two layers but did not open the “subset” layer with the 8,500 POI’s.  I didn’t see if the 83K POI layer displayed – I assume it did as no dialog box appeared on the screen. So perhaps I need to recreate this layer again (fortunately I save my definition query expression) and have users open in New Map Viewer.  (Oddly, I can display all the layers in Classic Map Viewer).