Hi I tried to use the new function FeatureSetByName in a Demo ArcGIS Online Map, and got below the errors, featuresetbyname is not available.

Then I tried it in Portal for ArcGIS and got below the error: Execution Error. 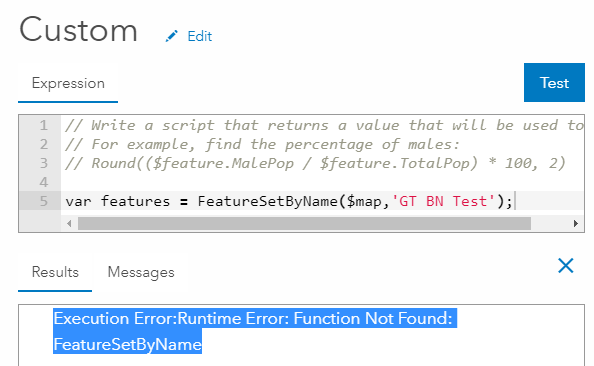 Does anybody have the same problem? any suggestions?

Where are you trying to apply this expression? Is it in symbology or in the label expression? If so the FeatureSetBy* functions are not available there. Another aspect to validate is the type of layer you want to do this on.

Where are you trying to apply this expression? Is it in symbology or in the label expression? If so the FeatureSetBy* functions are not available there. Another aspect to validate is the type of layer you want to do this on.

The layers are polygon and point feature class.

Could you please tell me where can I use the function in Web Map?

Thanks for the reply, and I tried it in Pop up, it works fine, so it's just not available in symbol or label...

That is correct. You can however symbolize a layer on a field created using FeatureSetBy* functions. To achieve this you should add the field and do a field claculation. The downside is that it will not be dynamic.

Oh, thanks, will try it on!

Hi Xander, can you point me to an example where you "symbolize a layer on a field created using FeatureSetBy* functions" as mentioned above?  I'd like to show only those points (stations) that are in wildfire polygons.

Hi Xander.  When will we have access to FeatureSetBy* in labels and symbology?  Symbolising related records is the single biggest issue we have had with FieldMaps/Collector for the past 5 years and we have created some epic workarounds but none are ideal.  (Before you ask, we cannot use the Join Features (View)  function as all our work is offline enabled and Views created this way cannot be taken offline.)

Is there a feature request i can  +1 and add my workflow examples to?

Hi @Scott_Sambell
We are having the same problem. We also want to symbolise related records. What are your workarounds for this, as this is still an issue?
Thanks,
Aarjen

We have been through a few workarounds.  We were using the Join Feature method (which doesn't work offline so we had to create an offline replica of the feature service using a dodgy ArcPro model), then we started using a mix between a scheduled ArcPro model and Geoevent Server to keep a cached feature service updated and we could almost keep everything updated in near real time but Geoevent server is wildly unreliable so we ended up having to reboot it everyday just to keep it going so, now we are finally using FME, running as frequently as the machine can possibly handle with a single engine to update extra fields in the parent that are populated by the most attributes from the most recent record in the child table to symbolise and label the parent features.

Its insane but this issue has taken up a good proportion of my adult life and i still can't understand why this isn't Esri's highest priority to provide a solution for out-of-the-box.