Transfer application from ExperienceBuilder for Developers v1.3 to v1.4

Upgrading from version 1.3 to version 1.4 of ExperienceBuilder for Developers. I am trying to transfer applications made in 1.3 to the new version, but it is not showing up when I go to access it at https://localhost:3001/.

I download EB 1.4, unzipped it, and ran npm ci and npm start for both client and server. The new directory has been placed where the old one was. The old directory has been retained in the same location for the time being and has just been renamed to distinguish it. The upgrade instructions (https://developers.arcgis.com/experience-builder/guide/upgrade/) state to copy the app folder from the older directory over to the new directory. I noticed in v1.3 that app folders were in two locations:

In the new directory, I copied the apps over in a few different locations: 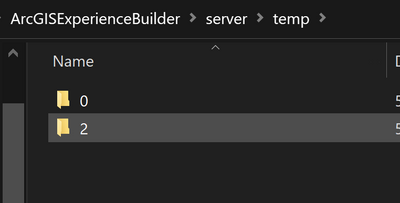 However, when I close out and re-start EB, the existing applications do not appear: 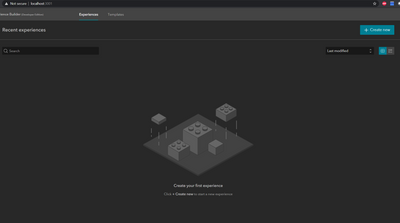 FWIW, the applications I'm trying to transfer do not have any custom widgets.

After some more fiddling this morning, I fixed the problem by doing the following -

1. re-downloading and installing a fresh copy of v1.4

2. creating a new application in v1.4 to generate a new folder for an app (NEWappId)

Having just upgraded from 1.3 to 1.4 myself, I can confirm that that's all I did. You're positive the folder wasn't there in the 1.3 directory?

Also, the /temp stuff is just for unpublished changes. If your app is in a "published" state, you don't need to bother with them.

Thanks, Josh - I appreciate you confirming that I'm following the steps correctly. Yes, the 1.3 directory doesn't have that folder. I rebooted 1.3 and made sure to hit publish on the app I wanted and checked again - not there, just the stuff in server/tmp and server/src/public. I have also tried downloading the application .zip from 1.3 and uploading the contents to 1.4-directory/ArcGISExperienceBuilder/server/public/apps/appname/. No luck.

After some more fiddling this morning, I fixed the problem by doing the following -

1. re-downloading and installing a fresh copy of v1.4

2. creating a new application in v1.4 to generate a new folder for an app (NEWappId)

Hi, can you specify what you changed in the config.json file to transfer the app?

Hi! After creating a new application in 1.4 and replacing the contents of that application's directory with the older application, I updated the old app ID, switched the status to draft, and updated the listed version to 1.4.0. I'm not sure why this was necessary with my installation but everything has been working fine since.