How to create serial chart displaying month and year only

I have monthly data that I want to show in operations dashboard for multiple years.   The dashboard hands the monthly data just fine for a single year, but I cannot figure out how to format my csv file to have it display monthly data for 2020 and 2021.

I opened a case with ESRI on this and haven't gotten anywhere in a few weeks.

The only work around I have found is adding a day to the month and year, but this is not accurately representing the monthly data.

Unfortunately, the Dashboard is expecting dates to be full timestamps, so month/year data without the day often has issues like this. Do you have multiple rows per month? Or is each row in the CSV a separate month?

Thanks for the response.  Each row is a separate month.

So, your options are sort of limited. A chart set to Grouped Values or Features can Parse Dates. 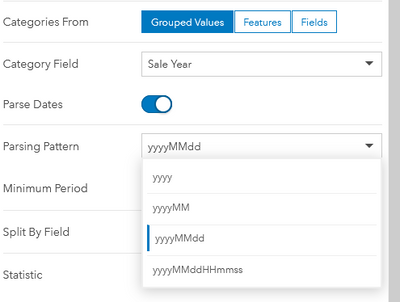 But this requires your date field to be in the specific patterns available. You could alter the CSV to display yyyyMM values and this would work. Then set the chat's Minimum Period to Month.

Otherwise, you'd need some way to reliably sort your values as a string or a number. Reformatting your date field could work for this too, but as it is currently in your CSV, you'll get the Aprils at the top regardless of year, etc.

Thanks Josh!   I will try this and report back.

I reformatted my fields to YYYYMM in the csv (attached) and set the chat's Minimum Period to Month.  But still not having any luck - getting a weird result.    Thanks again for your help on this.... 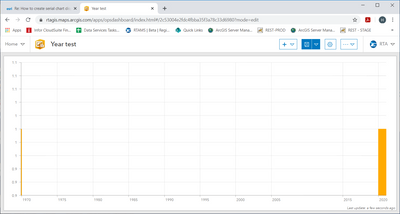 Weird... Is that "Grouped Values" or "Features"? Features is the way to go with one row per month. Then you can set the Series to be your other columns, instead of getting the count of features in the "group".

Given that some of your values seem to be getting tossed over to 1970, I'd guess that your year/month field is being interpreted as an integer? Underneath the formatting, a timestamp is really just an integer, and a timestamp of, say 202001, comes to to January 3, 1970.

I'd guess that your CSV values are being interpreted as integers, which themselves can be directly converted to timestamps, so it's probably parsing them that way. Can you "force" the field to be interpreted as a string? Or create a new string field and copy the values as text?

It seems even stranger that at least one of your values is correctly 'landing' in 2020, but the others don't.

Also! I was working with the Beta Dashboards, but in the standard Dashboard interface, the parsing options are a little better. 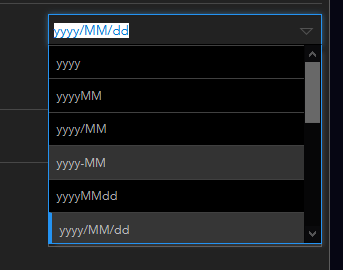 Try using YYYY/MM so that the "/" character keeps your CSV data as text, rather than casting it to integers.

Grouped values results in only one month of data and only shows the month - not month and year.

Features works but if the date field is formatted as string, it wont convert it to month and year.