I'm setting up a Trimble R2 to work with Collector on a Samsung Android phone. I've connected to the receiver via Trimble's GNSS Status App, left Collector on "Integrated Receiver" (I havn't found great instructions, but this appears to be the way it works even though selecting the R2 as location provider is an option). In collector, I appear to be getting the correct GNSS positions from the R2 rather than the phone, but when I record a point, the GNSS metadata entry for Receiver Name is the phone, not the R2. How do I get the right receiver name to record so that I can confirm that the correct receiver was used for the data collection after the fact?

I have only used iPads with a Leica GPS but will offer some direction. No idea if android and Trimble are the same. 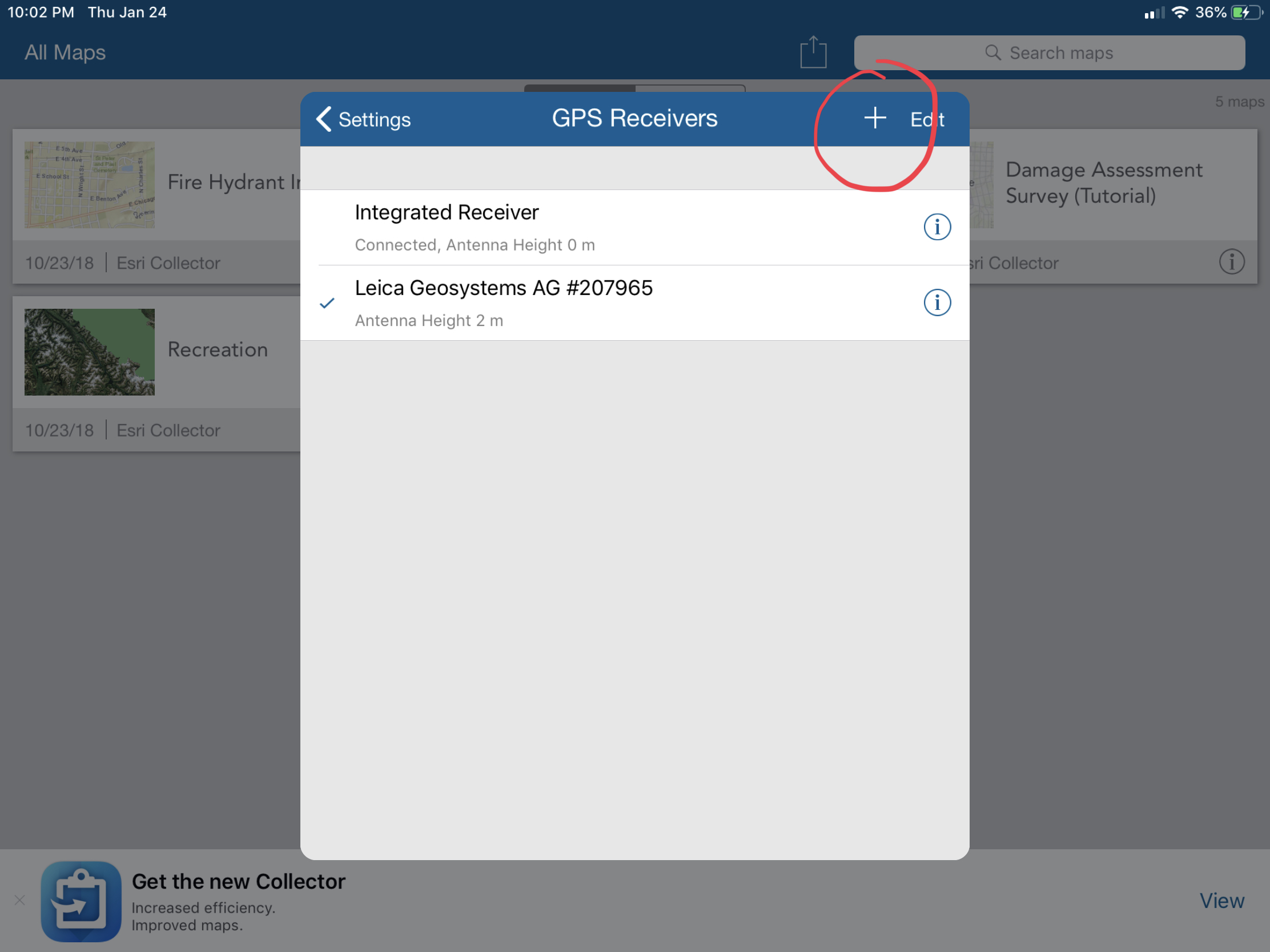 You may need to change the order depending upon your hardware.

Yea, I've been able to do that successfully on iOS.

On Android, if I follow these steps GNSS status disconnects from the R2, and starts using the onboard gps/location services, and no position is shown in Collector. If I connect GNSS Status to the R2 with mock locations enabled, and use the integrated receiver setting in Collector, then the R2 positions seems to be showing in Collector, but the metadata recorded to the hosted feature service says it's from the Samsung receiver.

Most of the third party documentation I've found is 3-4 years old, so I can't tell if some of the issues are related to new procedures resulting from more current software and OS, or something else. Neither Trimble nor ESRI seems to have good step by step instructions for Android, at least that I have been able to find.

I might have got it running correctly finally- I think the issue had to do with NMEA configuration. Not exactly sure what made the difference as I kept tweaking various settings/configurations until it started working by connecting to the R2 as location provider in Collector.

Yes, Collector needs the correct NEMA settings you also need to set up the profile for your GPS to use it with collector.  Here is link for the setup of a high accuracy GPS with Collector Classic: Use high-accuracy GPS—Collector for ArcGIS (Classic) | ArcGIS.  Also here is a list of supported NEMA strings: GPS receiver support—Collector for ArcGIS (Classic) | ArcGIS.

Below are screen shots on my NEMA settings and the profile settings in collector.  Keep in mind these are for a Leica GPS (your screen will look different) and the VRS network I am using for the profile.  Our VRS network is using GCS NAD 1983 2011 and ArcGIS Collector is using WGS_1984_Web Mercator Auxliary Sphere with the appropriate transformation applied. 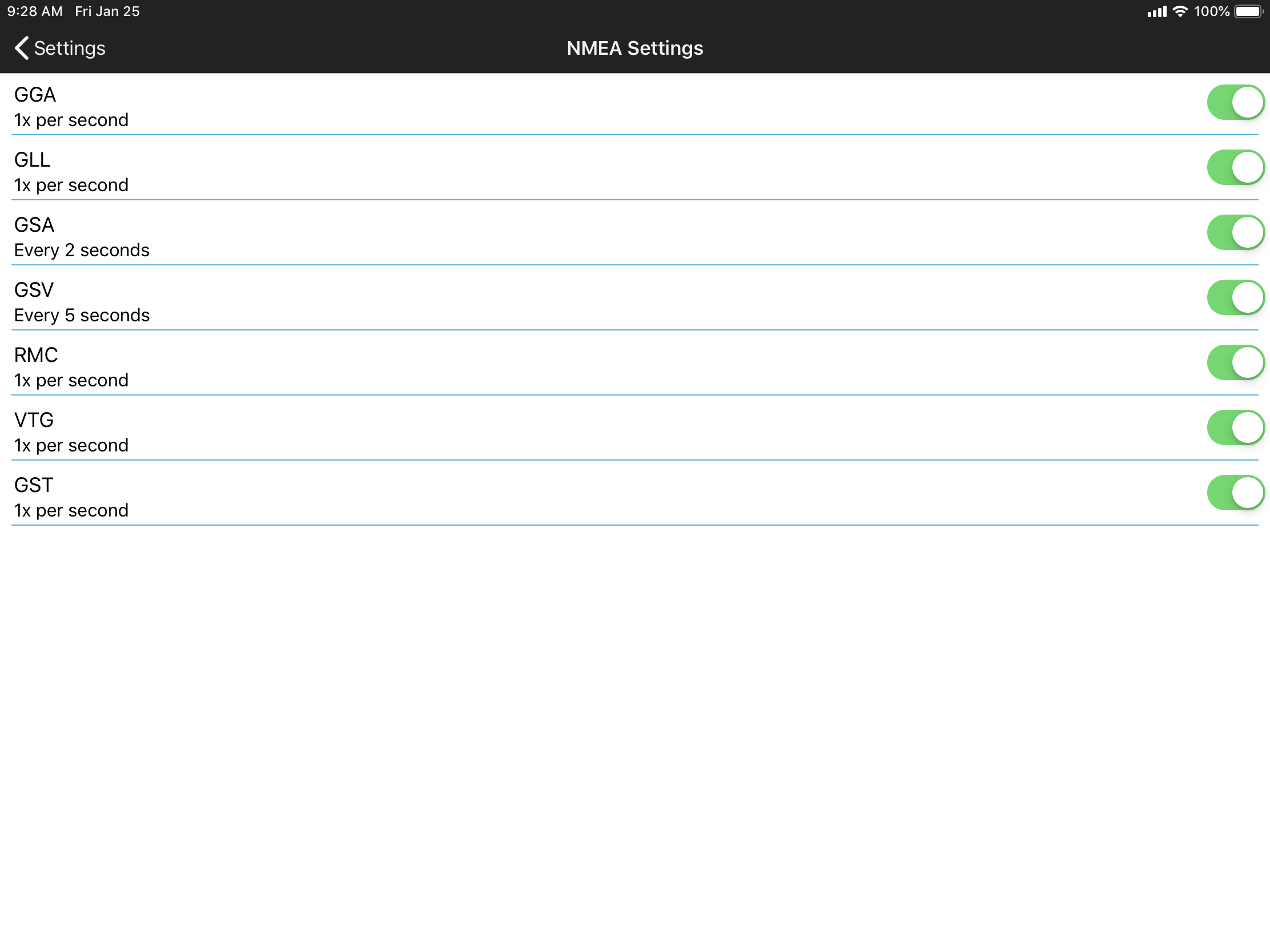 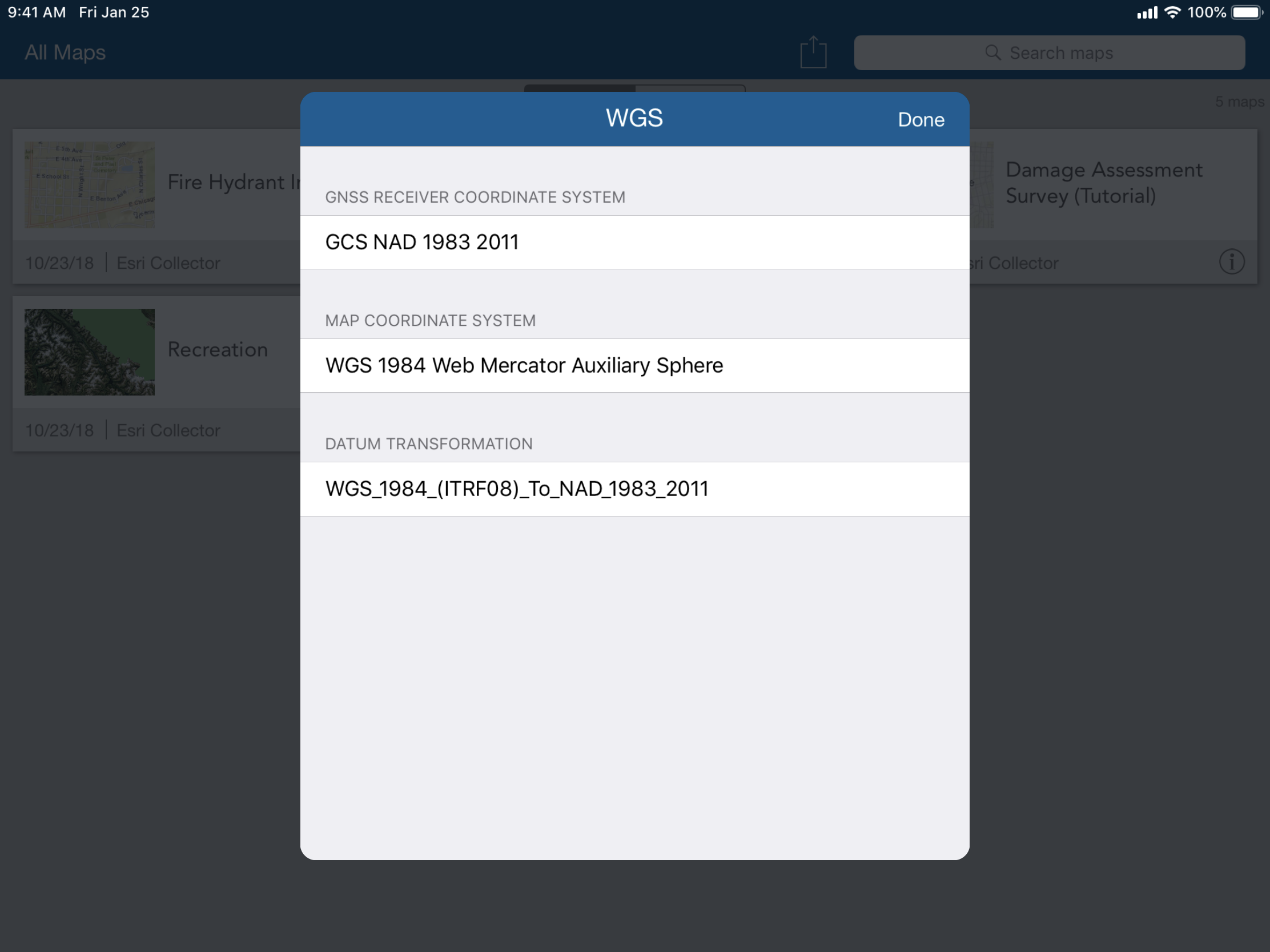 Sorry I cannot be more helpful as I am not familure with the Trimble units.  It took me a good bit of time and a lot of testing to get our system working with the Leica unit.

Good bit of time is right! Thanks for offering what you can. I think I've narrowed in on it. Trimble instructions on setting up NMEA output are terrible and mostly non-existent.

For anyone running into this- I found starting it important to set the NMEA in GNSS Status following a very specific order. On GNSS Status NMEA page, right arrow to activate all NMEA sentences, "Save" in upper right, "Apply", select Bluetooth 1.  At some point I had set NMEA to Bluetooth 2, and that was causing all kinds of havoc and it wasn't evident or intuitive on why or how to clear it out. At various points GNSS status disconnects from the R2, and needs to be reconnected from the Source page to continue setup. Once NMEA setting and correction services are set up in GNSS Status, then close out of that app completely before starting Collector and going through the location provider/profile setup and firing up your map.

A last update: I never got my R2 to work correctly with the Galaxy s9+ running Android oreo (8.0). Trimble support insists that NMEA is not necessary, and that their GNSS Status/GNSS Direct apps handle the translation between the R2 and Collector (classic). I could not get it to work, and Trimble Support just kept insisting via emails after several day delays that it works. I was able to connect to the R2 with GNSS status, set up corrections and get a good position. However, after setting the location provider to the bluetooth R2 in Collector, GNSS status would lose it's connection to the R2 as soon as you open the map in Collector, then you get no position in collector.

It does work using NMEA as I previously described, but using this method you can not receive corrections via NTRIP, or presumably any other non-SBAS correction method...that just makes the R2 a really expensive R1.

You can also use mock locations to send the corrected location to Collector, but in that case the receiver name recorded in the feature service metadata is incorrect- the devices integrated receiver (in my case :Samsung...) is listed instead of the R2. Neither of these were acceptable solutions for our workflow.

Ultimately, I ended up abandoning the Android device and am switching to Apple devices. I've tested on the iPhone 8 and it appears to function as promised. The new Collector app handles corrections internally, so when that is fully functional it will probably be the best solution, and ESRI appears to develop for iOS before Android.

Trimble Support wins no customer service awards through this process-In several communications they didn't seem to even know the specs or operating procedures of their own equipment and software. If you're taking this on, be prepared to figure it out yourself.

I understand that at this point you've switched over to iOS, however just as a follow-up to this issue on Android, were you working with Collector on Android 18.0.3 (the released version) or the Collector Aurora Beta version on Android?

The released version. I don’t recall what now, but the Android Aurora beta was missing some feature or functionality I required.

I've run into what appears to be this same issue.  Whenever we open the map in Collector (latest version on Google Play) on Android, the connection to the R2 receiver is lost and the GNSS positions are from the device.  We tried more than 5 times with the same result every time.  We use the same configuration without issue on several other devices, but this is the first one to behave in this manner.  I believe the device is a Samsung Galaxy 10.