I'm a novice when it comes to ArcMap and Collector so hopefully one of you folks can help me out with this.  We are water utility in Ohio and are developing (rather slowly) a hydrant and valve inspection and maintenance program. We currently use Collector, iPad and an EOS Arrow 100 external receiver to gather field data and so far things have worked fairly well. I would like to use Collector to facilitate in our hydrant and valve inspections. What I would like to do is create a way for the field staff to be able to change the color of a hydrant or valve once it has been inspected. If I would tap on the hydrant and see the attribute window display, is there a way to create a drop down arrow or something similar to change the color to indicate that it has been inspected or that it needs replaced, etc.? Visually, the field staff and office staff could quickly access what has or hasn't been inspected. Thanks for you help.

Do you have already setup that is populated with Yes or No for inspection state of the hydrant?  If not, you need to set one up and then you can change the symbology based upon whether the field is Yes or No.

Yes. I have done that. I created a Domain with the option of Yes, or No, but I’m not sure how to keep that drop down menu available when I upload them to AGOL and try to use them on collector. All of the fields are available but nothing that was contained in the Domain. I’m not sure what file type I would need to export it as to maintain the functionality of the domain choices.

Thanks for your help Luci.

We had problems with our domains coming over also.  You need to setup "feature templates".   Here is some good reading on how to do it:

Yes Kate, you should be able to do that. I have 4 different colors for our hydrant inspection. I have a drop down menu that has the words good, marginal, replace, and inspect. I took a screen shot from my phone and pasted below. We use Collector as well to do our inspections.

I can't see the picture you mentioned. Do you have server? We just have file geodatabases. Do you have the colors change from a related table or in the hydrant layer?

I reposted the picture. Hopefully you can see it now. I changed the background map so you could see the hydrants better, but the yellow waterline does not standout with this particular basemap. Normally the aerial is behind it.

No, I do not have Server. I try to keep this as simple as possible. We're a small outfit (15 employees) and couldn't justify utilizing server financially or with my limited knowledge. I felt good I made it this far.

It's been a while since I did this, but I'll try and piece this back together. When I set that layer up in ArcMap, I created a Domain called HydrantInsp and added the previously mentioned categories:

I left one of the inspection categories off in my previous post, and forgot to include NULL.

I added the Hydrant symbol in ArcMap and also the colors. I populated the layer with our existing hydrants. When I did that, they all were colored to NULL (yellow). But eventually all the NULLS should be inspected. Then they can be moved to Gray when they need inspected again. I then published that layer as a service to AGOL. The key for me to get the colors to work was creating the Domain HydrantInsp in the Inspection layer before uploading. I don't think you can create that Domain in AGOL, or you couldn't when I was messing with this last year. Maybe you can now. It changes so fast. The other thing I can't remember is if I had to go in and change the colors again once it was uploaded to AGOL and added to a map. I don't think I did because that symbol came from ArcMap and if you were to try and change the color, I think you would lose that symbol. I'm not 100% sure, but I just tried to mess with it and couldn't change the color without changing the symbol.

You mentioned a table. Are you talking about the attribute table of the hydrant layer? The only table (Excel CSV file) I have uploaded are our water meters. I'm messing with this currently. I want to upload a new meter file monthly because we are adding new meters and customers every month. AGOL give you the option to update that file with a new file that writes over the old one. I'm hoping this option then maintains the symbol and color for each of the meters. I have our meters color coded as well based on which tank services that meter. It helps visually when trying to figure out what tank serves what area.

I'm not sure I answered your question, but feel free to reply and I'll get back to you.

Thanks for the information Travis. By table I mean I have a related table that I created that is for all the inspection information. I then made a relationship between the inspection table and the Hydrant layer and shared them as a service into AGOL. As our Water Utility personnel inspect the hydrants, they create a new record that gets saved into the related table by the facility ID number. We have to inspect every hydrant every two years, how do you change all the colors back to show that they have to be inspected again?

Oops. I didn't mean I was doing that in AGOL. Sorry.

I haven't tried this, but will after thinking of it. You may be a able to add a layer to ArcMap from AGOL. Then if you right click that layer you can "create a local copy for editing". Then select all the hydrants, and open the attribute window. Make sure that all the hydrants object names are selected or highlighted in blue in that window that's just above the field names in the attribute window (see below). You should be able to select them by shift or ctrl in that little window. Then select which ever field contains your color-code. I think in your case you would change the inspection field back to "No". Once you make the change then you can "synchronize local edits with server". I have no idea if that will work or not, but they wouldn't make those options available if you couldn't. The only catch is you have to have the Standard license in order to sync those edits back. Hopefully you do. 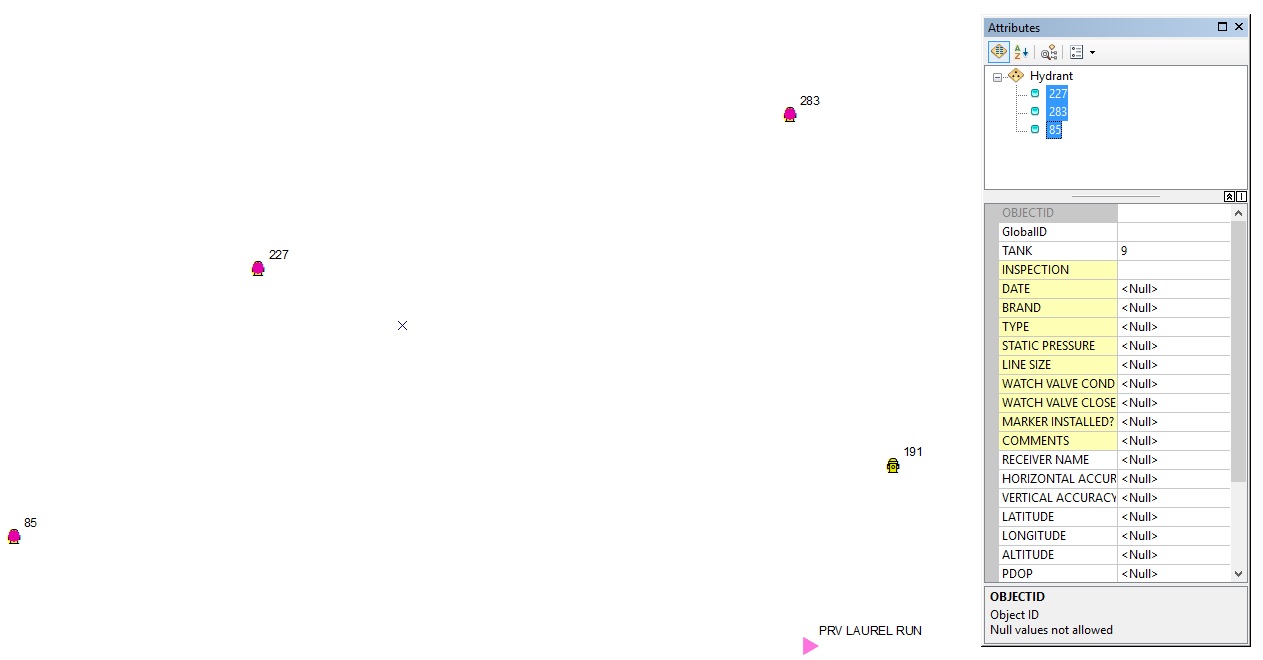