If you are only using the Parcel Editing solution, you probably do not need to be monitoring the updates we are making to the information model on a regular basis.  Those updates will come with core ArcGIS updates (Service Packs, major releases, etc.).  If you are using other Local Government solutions Esri is providing, I would keep an eye on the release notes and use these notes to determine whether you should upgrade.

If you are only using the Parcel Editing solution, you probably do not need to be monitoring the updates we are making to the information model on a regular basis.  Those updates will come with core ArcGIS updates (Service Packs, major releases, etc.).  If you are using other Local Government solutions Esri is providing, I would keep an eye on the release notes and use these notes to determine whether you should upgrade.

Is there a video showing how to use the Schema Migration Wizard? And how to get data from one version to another?  I have downloaded it and read the instructions but it isn't very intuitive.

We don't have a video specifically on the Schema Migration Wizard, but did cover it during our ArcGIS for Local Government: Deployment Tips and Tricks Meetup last spring.  Check out the video and fast-forward to the 22 minute mark.  If you have any specific trouble, let me know.

Okay so I am trying this again because some of the new maps I would like to implement for some clients use the new schema.  I have made a few additions and modifications to the geodatabase and I would like to keep those, but I would also like to update the schema with features that are used in the new maps.

I have been able to run the wizard and get an xml document that lists the feature classes I have added.  When I attempt to import the schema to an empty geodatabase it bails out half way through when trying to import the OpsIncidentArea feature class.  Do I need to use the X-Ray for ArcCatalog add-in for the schema import? Or can I just create a new empty file geodatabase and right click and select Import XML Document?   Scott Oppmann, that wasn't shown in the video you mentioned above, you skipped it for the sake of time.  I can't get either method to work.  When I open the output xml document - all of the xml tags are contained on one line - I don't know if that affects the import process or not.

And lastly, the interface for the Schema Migration Wizard is a bit confusing- 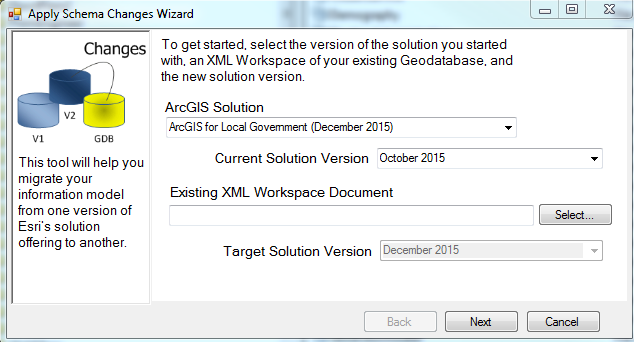 If you read the instructions at the top it would seem that the first box is the version of your old schema.  The second box says "Current Solution Version" which would imply Esri's most current release of the schema - but in fact I believe that it is the exact opposite. Then there is a drop down box at the bottom that says Target Solution Version that is grayed out and changes with the choices you make to the ArcGIS Solution box.  Why not have two drop downs labeled "Target Version" and "Your Version" with the "Your Version" selection defaulted to "unknown"?

When I attempt to use X-Ray for ArcCatalog to import the schema it says that I don't have Excel installed, but I do.  I am able to import the local government schema that I download from the solutions site using X-Ray just fine.

This is where it bails out when I attempt to import the schema by right clicking the geodatabase and selecting "Import from XML Document": 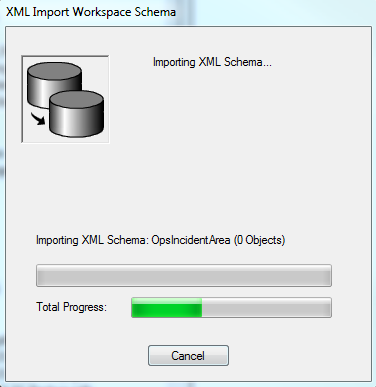 And this is the error message:

I select the "Schema Only" radio button on the import dialog so I'm not sure why it would be doing anything regarding a geometry - empty or otherwise.

This is what I get when trying to use the X-Ray add-in:

And that's just in the case where I don't try opening the xml to change the spatial reference.  If I try to do that I get the error about not having Excel installed after a very long time of the "wait" spinning mouse pointer.

Was this resolved at all?  I too get the empty geometry message, and agree the documentation is a little sparse for a complete understanding of each step involved in the migration wizard.  There is actually an ESRI Tech Document about the empty Geometry message being caused by using ArcView Basic, but that is not my case as in am using ArcEditor.  http://support.esri.com/fr/knowledgebase/techarticles/detail/43854

I am under a deadline for a client, so any help to get past this error message would be greatly appreciated.

Where I am confused:

I contacted tech support for this issue and learned that it is a bug with no workaround.  This is from their email to me -

Synopsis: Running the ArcGIS Solutions Schema Migration Wizard and selecting to keep the current content returns a bad xml file that cannot be imported to a geodatabase.

Unfortunately, there is no workaround for this bug.  We apologize for this inconvenience.