Scripting a Sequential ID based on highest value

I found main part of this code somewhere, and I like how it concatenates a letter along with a number. I am up for adding fields that store a number and then concatenates the final ID later, or whatever it takes so long as it quick.  Example would be: ConcernID, PrefixCode, LastNumber (all fields used in script). PrefixCode would be a default value of C and the LastNumber field would hold the number portion, and combine them to form the ConcernID.

This will be eventually used with an enterprise geodatabase feature class. Any suggestions would be greatly appreciated.

I played around with this this afternoon and came up with the following that illustrates what I was trying to describe above. This could help organize a whole series of incrementing identifiers for an app like Reporter.

I'm not sure where to start with this. You found this somewhere, but are you not sure what it does, or is it giving you an error, or where do you need help? In general, break it down line by line until you either understand what's happening, or ask for help.

I know what it does.  Basically, it uses a field with a prefix letter that is the default value.  It then goes sorts the objectID and then adds calculates an ID based on the next value.  It works for what it is designed to do.  However, it "starts" over from the deletion point and rewrites going forward.  What I am aiming for is to generate what it outputs, but not have it start over from a deleted value.

so I am guessing that didn't work or did you test it?

I tested it. It works. I am trying to get it to be "smarter" where it builds on the highest number value rather than what the picture shows.  It rewrites when there is a "gap" in OIDs. I would like to keep it so that the highest number regardless of what was deleted before it is the starting point to add 1 to the count to generate the new Concern ID. 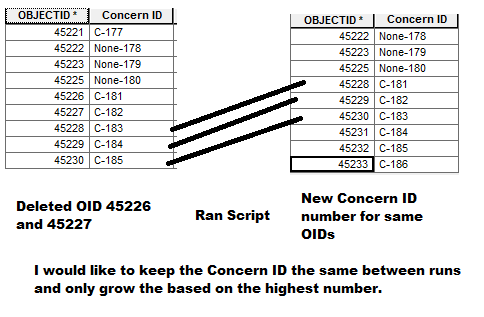 You can check if the Concern ID is blank and then update with the next available ID, and not update if it already has a Concern ID (but keep track if it's got the highest existing Concern ID).

For your sake, I hope you don't have to run this often nor that this dataset is very large.

If you are going to be implementing this in an enterprise geodatabase, you might want to talk with your DBAs about implementing something more robust using sequences and triggers.  That said, doing so gets complicated with versioned data, so your DBA has to have some skills to not butcher it.

Although I don't work with Attribute Assistant much, it might be worth exploring its functionality because it can do quite a bit of handy stuff with managing attributes, or so I have heard.