I'm back at it again. I've written a script to Iterate through an MXD and export all features within 50 miles of my state to a feature class. There are over 550 FCs to process and it keeps failing due to invalid characters. Does arcpy offer a way to parse out invalid characters when naming a conversion output?

Below is the code i'm referencing

Could you post the entire error message? What is an example of an invalid character? Is it always the same character that you could simply replace or ignore?

Could you post the entire error message? What is an example of an invalid character? Is it always the same character that you could simply replace or ignore?

as for the copy features, thats a much better idea than FC2FC.

Since you didn't give a specific example, I am guessing you are running into layer names that contain Windows file system reserve characters, e.g., a colon, double quote, etc....  Feature Class to Feature Class fails because the underlying call to create the new feature class fails at the OS level.

If you are willing to limit output names to only alphanumeric ASCII characters, you could also try the sub method in the regular expression module.

That is a nice method that Joshua Bixby shows to obtain a valid file name, although in special cases it may produce problems, but I like it (clean and short code). Probably going into to much detail, but there is a slugify project at GitHub that goes more into detail (also for URLs):

and some discussions here:

Turn a string into a valid filename in Python - Stack Overflow

I'm still fairly new to python and I'm not sure how that method works. I would say i know just enough to casue myself a lot of problems!

Would you mind giving a quick explanation? If not i'll dive into the python help pages! I did get my code working though. I'll post it below if you want to see it.

Regarding the specific code snippet I gave, let's look at the Python syntax first:  re.sub(pattern, repl, string, count=0, flags=0).  We are not using count or flags, so we need three things:  1)  a regular expression pattern, 2) a replacement string, and 3) a string to apply the regular expression.

So, the bracket expression I provided, [^A-Za-z0-9], matches any character that isn't A through Z, a through z, or 0 through 9.  The plus sign is used to match one or more occurrences.  Finally, the matched characters are replaced with an empty string to remove them from the original string.

The regular expression I provided is rather simplistic in that valid non-alphanumeric characters will also be removed, e.g., hyphens and underscores.  If one knew his/her code was only going to be run on Windows, an assumption I wouldn't make myself, a regular expression could be make to only remove Windows file system reserved characters.

As Grant Herbert​ pointed out, you could also use ArcPy's ValidateTableName​ method.  Using that approach, though, the invalid characters are replaced with an underscore and there is no way to change the replacement character.

Oh sweet that's pretty nice and super easy too. I was lost at the bracket. I caught on that you were using ranges but was still kind of confused. This is pretty sweet! I think i'll update my code to use this! Thanks:D

Hi Russel Klueg , I do have some considerations. Have a look at the TOC of a dummy document that I created: 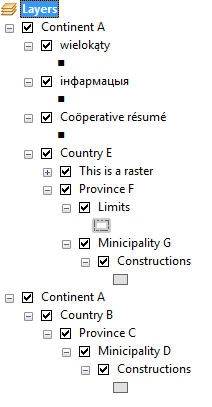 If I run the following code:

It will output this:

What I want to explain with this (that only shows part of the problems one can encounter) is:

These are just some considerations. Maybe none of them apply for your specific case, you know your data and you are the only one to run the code, then this will not be a problem. However, when create a tool that others will run, then you should account for all these cases.

Xander Bakker​, The way my code is written, that is part of the reason I chose to use str(lyr) i'm not exactly a strong scripter and using the group layer name to create unique files was easiest for me . I'm self taught and only over the last couple months.

I've still got a lot to learn. Especially in arcpy. I really appreciate your advice:D