I am trying to join a TXT/CSV file to a feature layer by a common variable. I say CSV/TXT because I have tried adding the table in both formats, but in either the FIP code format changes (commas are added). My table has all variables necessary to perform the join, but when I try joining them it says that the join feature failed. Ideally, I want to join the FIP column from EJI3 to the GEOID column from tigerWMScurrent, but I can't fix the format of  FIP in the table. I tried joining by tract because those columns are the same, but that didn't work either.

I would appreciate any feedback! 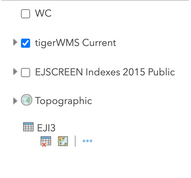 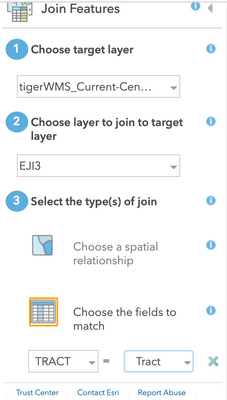 Are you able to open the CSV in MS Excel properly?

If yes, then save the file in XLS/XLSX format.

Then, use Excel to Table to convert to geodatabase table. Use this table for Join.

Also ensure the TRACT fields are in TEXT and have common values in both the Feature layer table and the non-spatial table.

Is the Excel to Table function available on the free online account? I am currently using a student trial version.

This works with ArcGIS Pro.

Do you have access to ArcGIS Pro? It usually comes with the student trial. You could check with your mentor.

Else you could access a 21 days trial from ArcGIS Trial.

In case, you have an active Learn ArcGIS Account, you should be able to download and install ArcGIS Pro.

Ah yes, I haven't installed ArcGIS Pro because I am using a Mac.

I see. Could you attach a sample for testing the data? We can look for a workaround solution.

Also let me know which attribute (FIP of EJI3 or GEOID of tigerWMScurrent) is showing correctly?

Hi I have attached the xlsx file and provided the link for the Tiger data. I know that the FIP variable should match the GEOID variable, but when I upload the file as CSV or TXT it adds commas into the FIP and FIP2 variable. So the GEOID is correct one.