SDE - Version links breaking when mxd is transferred to another user.

I'm currently editing landbase layers in the City's enterprise geodatabase and we are running into an issue with being able to share mxds that contain a Version.  For example, when I point my boss at the mxd I made with my Version in it, and he opens the mxd I used when editing, all the links to my Version's feature classes are broken.  However, if my boss starts a brand new mxd, then loads in the feature classes, then changes to my Version, he can see my Version fine.

We talked with our IT folks and they think it is related to how our network logins are used as part of the data paths set in the mxd.  For example, my name is part of my login and the network adds my name to the path.  So when my boss logs in, that "Path" doesn't exist for him as it trying to do the pathing though his name not mine.

So my question is, is there a way to allow sharing of mxds that contain a Version between two people so they can both see the version without the link breaking?  We can continue to do the workaround, but it is annoying to have to pull in all the feature classes again, change version, resymbolize, set up the labeling, etc, every time a different person needs to look at the version.  This make it difficult when we are reviewing and need several people to individually check that changes satisfy their requirements.

Both my boss and I are "owners" in SDE of the landbase data.

The Versions I made have permissions set to "Public".

I recognize this is probably a complicated issue, with the interactions between the network, ArcGIS, SDE, etc but wanted to throw it out there in case folks had run into something similar and could provide a way to resolve this.  I'm far from an SDE expert, so could very likely be overlooking an obvious solution.

PS - There is also an easy workaround I've considered - I change my name to be the same as my boss'.   That could work out better than the alternative - his paycheck is far greater than mine....

I like the easy workaround you already thought off!

Anyway, what if your Boss just does a Resource after getting the MXD from you? He just needs to have an existing connection to that gdb on his machine (maybe already connected to your Version if needed) and then when you give him your MXDs, he just resources the layers. Does this work?

Unfortunately, it is not a simple re-sourcing.  I was hoping it would be like typical broken links, where if you fix on the rest that are in the same place get fixed.  Or in this case, if I fixed one de-linked feature class that participates in the Version that all the rest of the feature classes in that Version would be automatically be fixed.  It doesn't work that way, though.

Here's a simple example with just a few layers (we usually have more than a dozen feature classes that are modified in the Version). 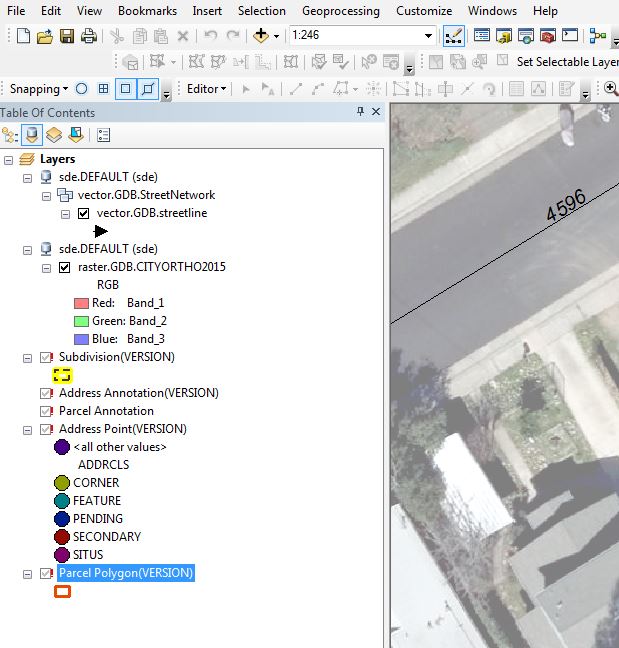 Now, we can go to Layer Properties, Source tab, Set Data Source, browse for the layer, then Add, then close, then change to the Version.  But we have to do this for all the layers.  Sort of a pain.  Then when the Version needs to go to another person they have to redo the who process.

I gave it a quick try and it seems to work, though I will need to test it further just to be sure.

Thanks for the suggestion.  Sometimes it is the obvious stuff that trips one up.....

Are you using operating system or database authentication with your geodatabase connections?

I believe it is Database Authentication.  At least that is what is shown in the Layer Properties, Source Tab, under "Authentication Type" when I look at a feature class in a Version I made.

If you use OSA and point the connection file to the same version any user should be good to go.

Thanks Bill.  I'll see if Operation System Authorization is an option when I get back into work after the holiday.  That will certainly make life easier, if it is feasible given our City's configuration.