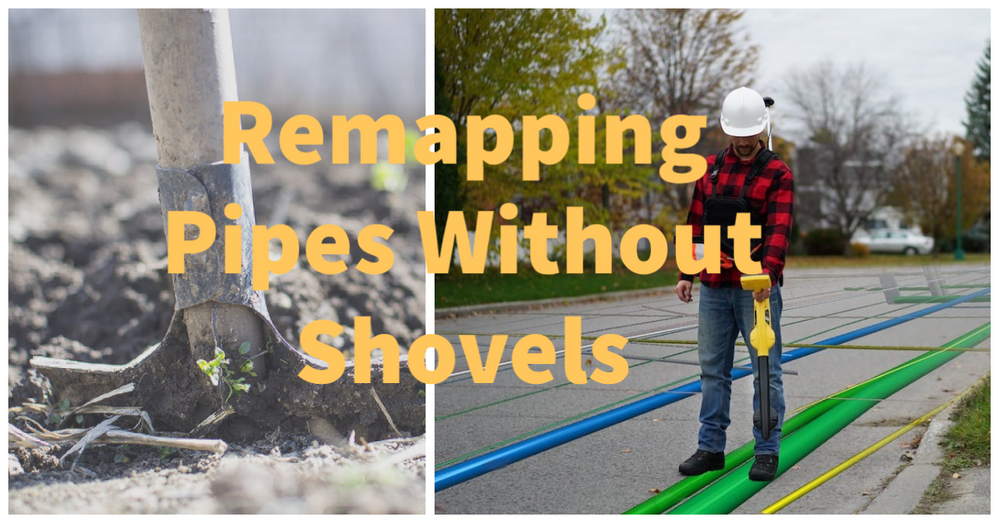 By Tom DeWitte and Tom Coolidge

Technological changes now offer the gas utility industry the opportunity for a paradigm shift in how it manages the locational accuracy of existing buried pipe systems. These new innovative solutions allow existing pipe to be mapped to sub-foot spatial accuracies without taking the pipe out of service. They also either minimize or even eliminate the need to dig to expose the pipe.  In other words, it is now possible to accurately and cost effectively remap existing buried pipe without shovels.

To understand the business value of these technological breakthroughs requires of little history of how buried pipe was mapped through the 20th century, and the scale of the problem pipe organizations are facing.

Mapping of Buried Pipe in the 20th Century

Currently in the United States there are nearly five million miles of buried pressurized pipe in service. Drinking water accounts for 2.2 million, natural gas 2.6 million, and petroleum 0.19 million miles.  Most of this pipe was installed decades ago.

During the first half of the 20th century, accurate mapping of newly installed pipe to many organizations meant it was on the correct side of the street. In natural gas distribution pipe systems across the U.S., there are still over 50,000 miles of active pipe which was installed before 1950.

During the second half of the 20th century, the United States, like the rest of the world, built out most of its buried pipe infrastructure. For natural gas distribution pipe systems in the United States, 797,359 miles of that pipe is still in service. The location accuracy of this buried pipe improved. By the beginning of the 21st century, many organizations were documenting new pipe construction to within 10 feet of its true location. 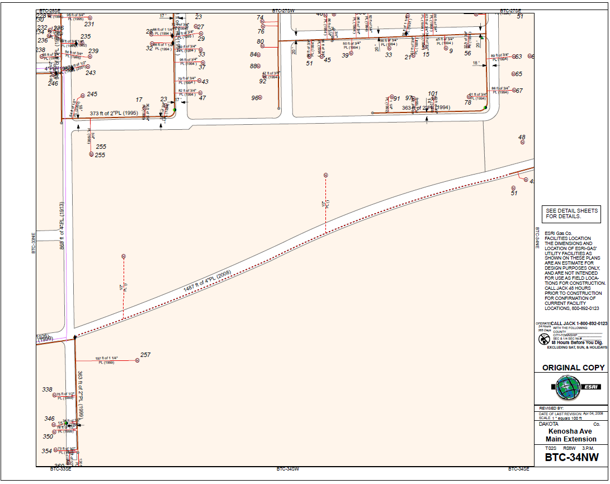 Why is this a problem

Every day in the United States, someone inadvertently strikes a buried pipe while excavating.  According to U.S. Department of Transportation, Pipeline and Hazardous Materials Safety Administration between 2001 and 2020 there were 12,506 reported pipeline incidents. These incidents resulted in 283 deaths, 1,180 injuries, and $9,949,689,660 in costs.

Excavation Map from PHMSA of reported excavation damage since 2000

For many of these incidents, the root cause was inaccurate spatial location of the pipe from the mapping system.  As previously noted, the lack of spatial accuracy of the documentation of the 20th century installed pipe, is a major contributor to this root cause issue.

In addition to excavation damage exposing the issues with inaccurately mapped inservice pipe, there are changes occurring today and in the near future which also need to be discussed.

Today, new pipe construction is collected with high accuracy GPS receivers such as the Eos Arrow Gold. The Arrow Gold, like other GPS receivers in its class, is capable of centimeter location accuracy.  This is a huge improvement over knowing what side of the street the pipe was installed on as was common in the early 20th century. 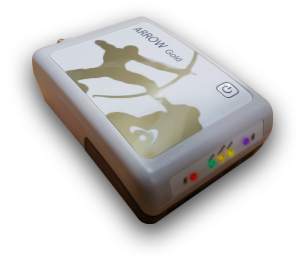 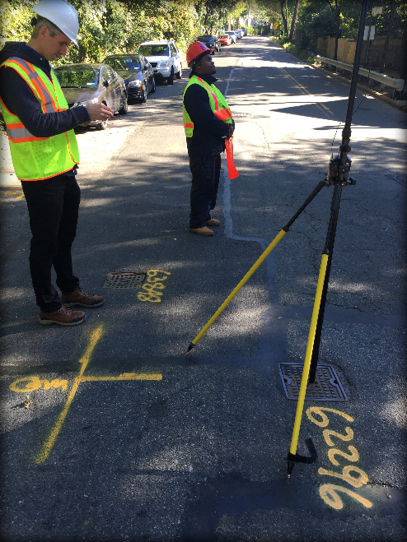 Soon, field technicians such as locators, will be using Augmented Reality software on their phones and HoloLens to see where the pipes are buried.

Both the highly accurate new pipe data, and the technology emerging needs for more accurate pipe data are exposing the lack of location accuracy with 20th century mapped pipes.

What is being exposed is that the sub-foot mapped newly installed pipe, does not match up with the legacy mapped pipe of years past. That newly installed service pipe tee which was mapped with high accurate GPS could literally be 10, 20, 50, even 100 feet away from the main to which it is supposed to be connected.

How Do I Fix my Legacy Pipe Data

Five years ago, remapping existing pipe systems to the sub-foot level of accuracy needed for today’s pipe organizations required digging spot holes to physically expose the buried pipe and validate its location.  This is very expensive, and required digging up roads and sidewalks, which is not appreciated by the local community.

Thankfully there are now other options. One option is to insert a sensor probe into the active gas pipe.  The company REDUCT has worked with the energy research group, GTI, to bring this innovative approach to market. Another option is to integrate high accuracy GPS with a Utility Locator Receiver and ArcGIS. The company Eos, in partnership with Esri, has brought to market their Eos Locate for ArcGIS solution. The Eos approach works on any pipe or cable which can be accurately located with a Utility Locator Receiver.

Both of these recent-to-market solutions provide the ability to very accurately map the location of existing pipe without taking the pipe out of service.

Locating and Mapping At the Same Time

The Eos Locate for ArcGIS is a game changer. It allows a locator who is already performing a required task, i.e., the call before you dig locate, to accurately map and directly load into ArcGIS the location of the existing pipe or cable. No digging, data prep, or data conversation is required for this new type of data collection. 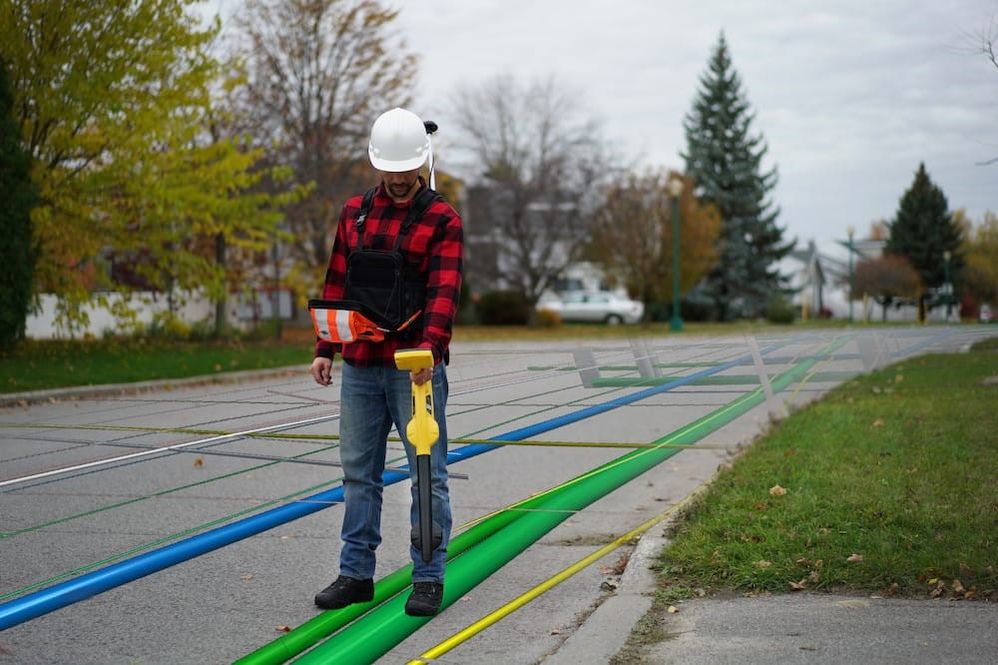 Improving the location of nearly five million miles of existing in-service buried pipe is an overwhelming challenge to pipe organizations not only in the United States but around the world. Recent technological breakthroughs in both in-pipe sensors and above-ground sensor integration are providing solutions to this challenge. These new solutions and their integration with ArcGIS are enabling those responsible in pipe organizations to cost effectively meet the pipe location accuracy needs of today and tomorrow, while leaving their shovels in the truck.

PLEASE NOTE: The postings on this site are our own and don’t necessarily represent Esri’s position, strategies, or opinions.