Where is the import button for coordinate system when creating a new feature data set?

I am trying to create some new feature datasets for lidar terrains in an SQL enterprise geodatabase in ArcCatalog 10.3.1.  However, when I right click in 10.3.1 ArcCatalog or ArcMap Catalog Window > New > Feature Dataset, after naming the new feature dataset, the next window wants me to define the xy coordinate system.  In my experience, and in the 10.3.1 and 10.2.2 help files, there is supposed to be an Import button on this window that allows me to get the coordinate system from an existing feature class. (as in the link above to another thread)  I don't understand why it seems to be missing in both Desktop 10.3.1 for enterprise geodatabases and with Desktop 10.2.2  using file geodatabases. (see image below)  Is there an option in Desktop that I need to set?

The Create Feature Dataset (Data Management) tool looks like it still has the option of getting spatial reference " By referencing a feature class or feature dataset whose spatial reference you want to apply, such as C:/workspace/myproject.gdb/landuse/grassland. "  so I could try this in a python window.

But what happened to my import button? 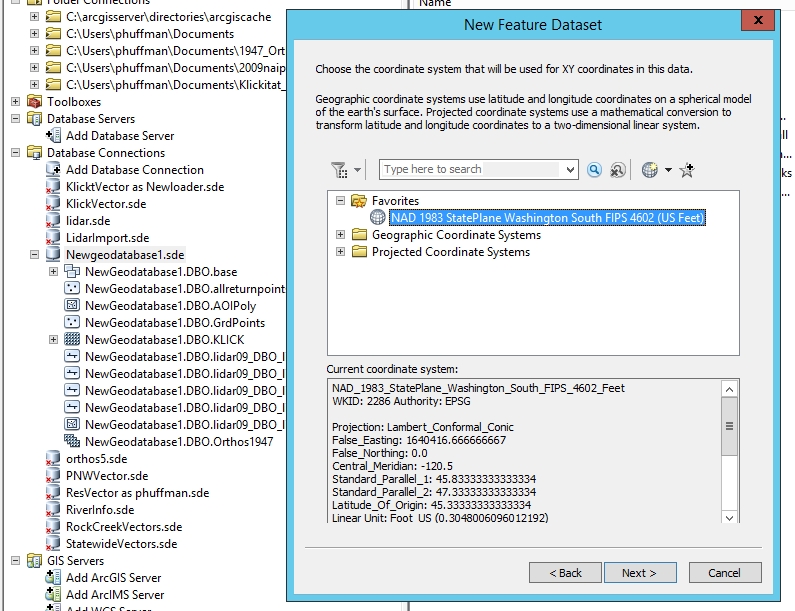 Thanks, that was easy.  I thought I was losing it.  I remember the import button looking like the image at the end of this thread.  https://community.esri.com/message/77856#77856   Also, 10.2.2 Help doesn't mention a pulldown, it just says  "Alternatively, click Import and navigate to the feature class or feature dataset that uses the spatial reference you want to use as a template. "