Question regarding 1) projections, and 2) workflows needed to produce a grid across a region

I am currently picking up on the research of another colleague and am trying to map out, from excel data, what is meant to be a grid (of equal sized rectangles) on ArcMap 10.4. I've attached the data-set here but am at odds on which projection system to choose. Clearly, the overlapping points represent the UTM boundaries of Ontario, but my different attempts at using the UTM zones in each doesn't seem to display correctly.

The second part of my question would be on how to construct the actual grid in ArcMap.  Given that the points displayed represent the center of each grid cell, would tessellate be the most appropriate tool in this place? The actual dimensions of the cells are unknown and therefore have to be deduced geo-spatially.

Thanks in advance to everyone who comes upon this post.

When converting the Excel to points, you could choose the Coordinate System as GCS_WGS_1984. Although I should have reprojected the shapefile before going ahead with the workflow, but I didn't. The coordinate system for all the data and the data-frame is GCS_WGS_1984.

Now coming to the creation of "Grid-like" polygons, a portion of which looks like this 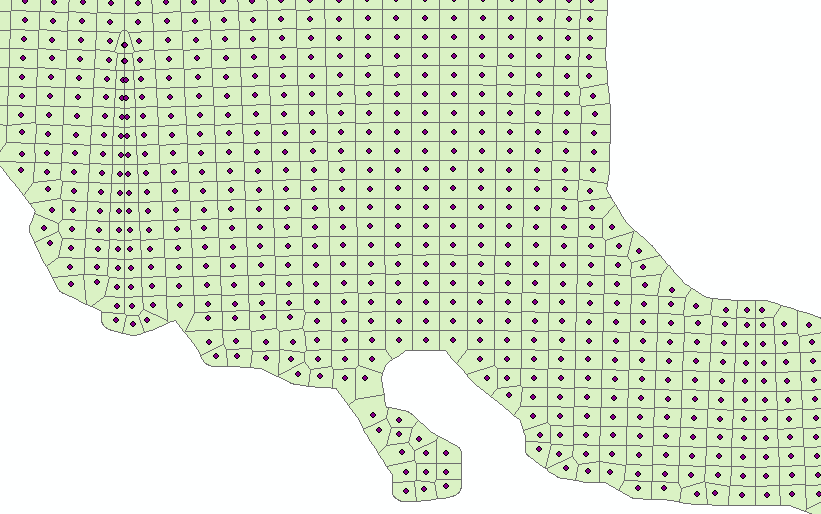 2. Now we needed to cut the polygons appropriately. First I used Aggregate Points with the points as input to create  envelope polygon(s). AGGREGATION_DISTANCE = 0.5 Decimal Degrees

3. We used Buffer of 0.1 Dec. Degrees on the polygon(s) resulted from Step 2 so that all the points reside inside the polygons (instead of the edges).

4. Clip the Thiessen Polygon Boundary with the Buffer Boundary.

5. To check if there are any polygons which don't intersect with Points, you can Select By Location with appropriate parameters. (I did not find any.)

The resulting Grid-ish Polygon shapefile is attached for your reference.

Based on the original image, they might have originally had data in 3 UTM or MTM zones which were then unprojected. Thus the truncated NS lines around 90W and 85W (approximately). Or, if Ontario used a township-range-section system, that could also cause those types of artifacts.

Since the data are for ontario, consult the provincial government sites, they tend to use their own projected coordinate systems when the EW extent is greater and/or spans 2 or more UTM (or MTM) zones.  They are based on a Lambert Conformal conic, but they may have a simplified name like MNR Lambert (iif memory serves) so as to identify them to staff... they aren't really special... just named accordingly and they may use defined standard parallels best suited to Ontario.  When you get close to the border with Quebec, it is not uncommon for the mix of UTM and MTM to arise with the former being used for larger areas and the latter at the municipal level.  The provincial websites are pretty clear and you will find most in the Projected coordinate system, section, National Grids, Canada... etc etc.

Well thank you all for the succinct answers and insightful replies. In the end, while I did use the thiessen polygon and other interpolation methods, I ultimately calculated the average space between each points (20,000) and converted the points into raster cells instead.

Regarding the projection/GCS, I actually split the data roughly using the UTM divisions (not an ideal result), but thanks to everyone who answered. Indeed, as this is based off of Canadian government data, the best method may be to consult the source directly.