The geodatabase is used by ArcGIS Server, FME and various scripts that we don't want to remake.

Is this an dead end? Better to delete all reationship classes, move data and make new ones?

You can try this:

1. Select all the Feature Classes and Relationship Classes inside a Feature dataset

Note: Try on a backup first and not directly on Production.

I think it is a dead end. You can create relationships with a geoprocessing tool, so that could save some typing and reduce errors if you use similar options and naming conventions for the parameters in the relationship. Just edit the Results of the tool for each feature, or build a little model.

You can try this:

1. Select all the Feature Classes and Relationship Classes inside a Feature dataset

Note: Try on a backup first and not directly on Production.

Hi, and thanks for your reply. This method only works if the relationship classes reference to featureclasses in the same feature dataset. Otherwise it will also copy and paste the other feature datasets automatically.

Not Copy/Paste. I suggested Drag and Drop.

. I will try it right away!

That action worked. Many thanks

After doing what you describe, do you know the most efficient way to fix references in Pro maps to these feature classes?

In a development environment I successfully dragged/dropped feature classes & relationship classes out of a feature dataset. (My plan is to eventually delete this feature dataset.) However I have maps that use these feature classes and relationship classes in their layers. And I noticed that when I check the source of the layers, it still references the old feature dataset. These maps are published to our development Portal. And nothing seems to be broken in there. But I'm thinking these incorrect references will probably cause issues somewhere along the line. Do you know what is the best way to fix them? 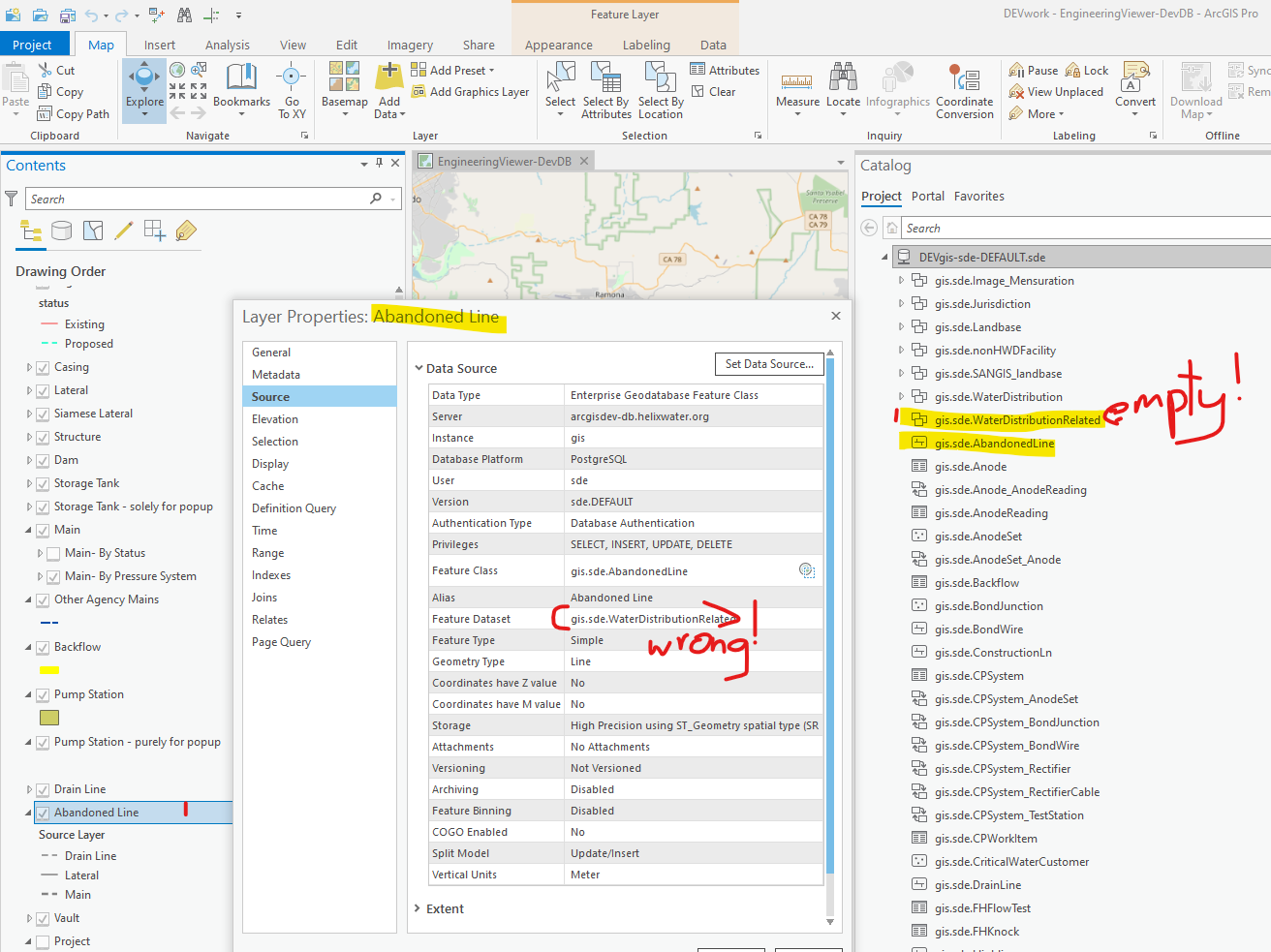 So, I tested on my end and I could reproduce the behavior.

The behavior is only observed for Feature Classes which are already added to Map, not otherwise. I am not sure if these will cause any issues, however it may cause confusion for sure, so its surely better to fix them if possible.

only solution I found:

Remove the affected FC from the Map Contents, refresh the connection and re-add the FC to the map. Now check the source, it doesn't refer to the Feature Dataset anymore.

Note: Always try on a backup first and not directly on Production.

Thank you very much for checking into this and letting me know your findings. I'm currently looking to see if there's a programmatic way to do this by leveraging getDefinition on Layer. So far I have only been able to display the feature dataset for layers in a map, but not change it. I think really what I need to be able to do is remove the featureDataset attribute for the layer.