Never had a problem adding CAD line work until 10.4 update. Now this error. 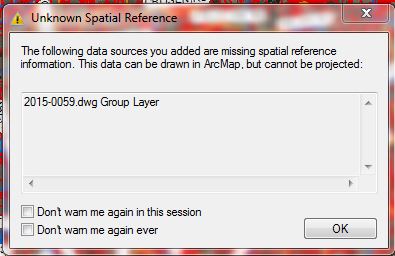 just a warning, not an error, I suspect the flag to warn about missing spatial references got toggled off at some point in your prior version (there was a check box to turn off the warning...it did get toggled off since it would warn you otherwise.)

See the two check boxes in the bottom left of the dialog you are showing?  NEVER toggle those off since you will be working blindly with data whose coordinate system is unknown.  Define its coordinate system using the Define Projection tool, or do it in cad if you can.

The problem is that the line work I imported into Arc prior to updating fell into place perfectly now no line work shows up. The layer shows in the table of contents correctly. I imported all my layer info into CAD so that I’m working in the same coordinated system. I’m sure it’s a setting I lost after the update from 10.2.2 to 10.4 but I don’t know where to look.

Tried that to no avail. The top layer, 13208 tax map, was already in before I performed the update. The layer in the new data frame, 2015-0059.dwg, has an extra layer feature now after the update.2015-0059.dwg new parcel. Looks as though that’s the CAD layer information. The Unknown Spatial Reference warning that pops up says the data can be drawn but not projected. It’s not being drawn is the problem, nothing shows in Arc. Stuck still.

Whatever the issue is, it is between 10.3.1 and 10.4. I uninstalled 10.4 and installed 10.3.1 and have no issues with importing the line work from Cad. I am using AutoCAD Civil 3D 2015. The only difference I see is on the Table of contents: In 10.4, there is an added feature for the layer imported that doesn’t show up in earlier versions.

In regards to the not drawing issue, I'm not sure if this is the cause, but may be worth considering:

ArcGIS 10.4 does not list AutoCAD 2015 as a supported CAD format.  2014 appears to be the most recent supported version.