Tracking user who has deleted the record in the archive table

At the moment Editor tracking records the folowing information:

This is great feature, however when archiving is enabled it misses such a very important information:

Actually geodatabase archiving combined with editor tracking needs to be used there. There is a bug NIM085153 on this issue, and it shoud be easy to implement.

Actually geodatabase archiving combined with editor tracking needs to be used there. There is a bug NIM085153 on this issue, and it shoud be easy to implement.

The geodatabase archiving is only possible in versioned geodatases and versions are only supported in ArcSDE geodatabases.

I've done this in the past on SDE tables About Change Data Capture (SQL Server) | Microsoft Docs  but it's not worth all of the extra steps. If you need to establish chain of custody for a forensic IT investigation, you can get the user name of whom deleted a record from system tables and transaction logs (again, a PITA), provided you're doing daily or incremental backups.

I agree with this statement. you can accomplish OP's idea directly in SQL Server (Or any other RDBMS) but its not easy to set up if you're not a professional DBA.

Having this capability directly in ESRI products would be beneficial.

I am using archiving and editor tracking. But the username of the user performing the delete action is is still not captured.

How can this be implemented?

I can find no record of bug NIM085153 and its resolution, or otherwise.

It is now possible to capture who deleted a record in a table with standard archiving and user tracking using attribute rules.

It is not possible to capture the user editing the data into the same table (as the row just gets ended).

It is possible to capture deletes into separate logging table. 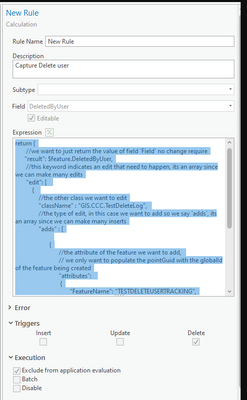 Note this is an old screen capture, the Field should exist in your table that is being tracked. It doesn't matter which one, it is not being modified, it just needs to exist so that a calculation rule can be triggered on delete to place a record in the logging table.

There is no point in having a column called DeletedByfield within the table being tracked, as it is not possible to populate the result into the edited table during a delete.

Here is the arcade expression for the attribute rule: