I have a survey that was created within the last month using Survey123 Connect 3.11.123 and built from an existing feature layer.  I'm actually running app integration in Workforce to launch this survey directly from the Workforce app into the Survey123 webform.  I had everything working and was not experiencing any issues until the April 13, 2021 update of ArcGIS Online.  Since that update, upon attempting to submit a survey from a mobile device I receive an error at the top of the screen that simply says "Failed to submit."  No further explanation, just that.  I've researched this issue and found several different cases of people with a similar problem, all of which I've checked my situation for comparable solutions and have come up with no explanation.  I'm sure it's something simple that I'm overlooking, but I can't seem to nail it down.

While I hesitate to provide any unnecessary information, I should note that the feature layer upon which this survey was built is the Workforce Assignments layer from my Workforce project.  I'm using the survey to collect additional attribute information for each assignment, so the survey is being opened in "edit mode" so as to edit an existing feature rather than create a new one, passing the GlobalID to the survey via URL parameters to identify the feature to be edited.  This procedure was validated through another thread found here.  It is stretching the "out of the box" functionality of the app integration between these two apps, but it was confirmed by ESRI that it will work, and IT WAS working, before this new update to AGOL.  The survey opens up just fine when you open it from the Workforce app, and I can populate the survey questions normally, it just won't allow me to submit.

I've attached the xlsform for my survey.  I'm hoping there is some simple problem that I'm overlooking, but with the vague error message I'm getting, I'm not certain where to look.  Maybe someone can spot my issue.

Let me know if I need to provide any additional information.  Also, this is not a public survey, so sharing the link won't do any good (It's also not designed to open up separately from Workforce, since it's editing an existing feature and must have the GlobalID passed from Workforce using URL parameters.)

I realized that the xlsform didn't attach.  It should be attached to this post now.

Usually it's a sharing setting on the underlying feature service. What user types are accessing the form? Viewer types can't edit non-public layers; could that be related here?

Did the table's alias change? That can be a problem, too, though I think that would return a different error message. 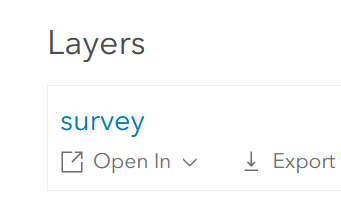 Thanks for the reply.  I've checked the sharing settings and I can't seem to find any issues.  I've had problems with that on other surveys, but for right now it is only me attempting to submit the survey, and I'm the org admin and the owner of all the data.

Here are my sharing settings for the survey: 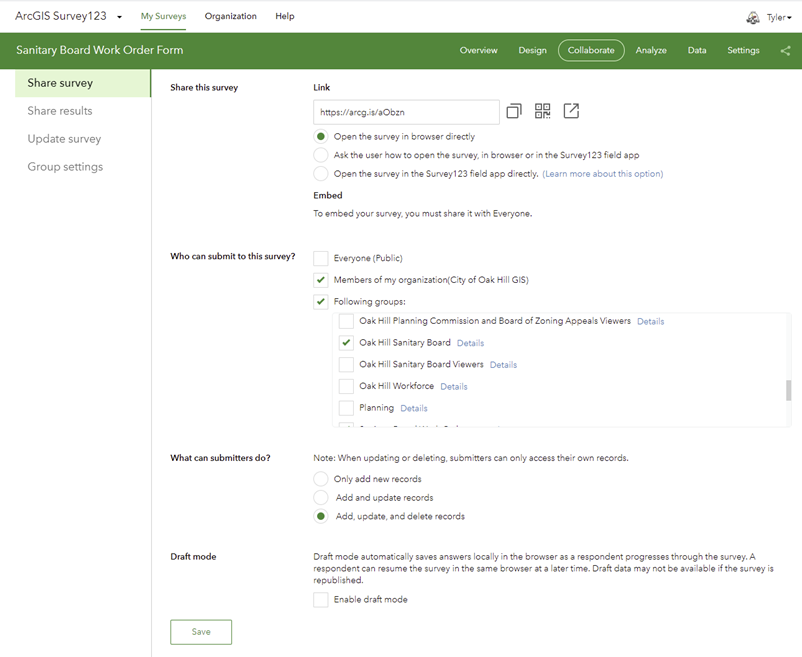 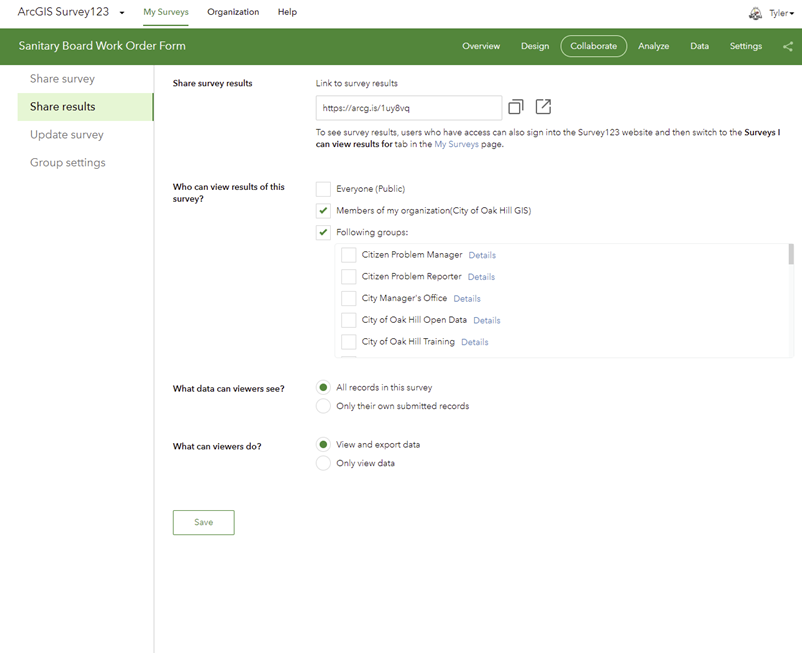 I don't think the alias has changed.  It's still listed as "Assignments."

And do those match the sharing settings for the feature service? It seems like a silly question, but the form item and the data layer can sometimes get mismatched.

Also, I just downloaded Survey123 Connect 3.12 and re-published the survey, just to eliminate that as the issue.  I still get the same behavior I've described above.

Oh that is weird. Perhaps something isn't being passed between Workforce and Survey properly. Personally, I think this sounds like it's getting closer to Tech Support territory.

You might try opening up your browser's developer window and watching the network traffic when you open the survey and attempt to submit it, but I wouldn't know exactly what to look for with the problem you're describing.

Yeah, I can't quite figure what's going on.  Especially since it was working prior to the April 13 update.

Maybe @CraigGillgrass would have some insight?  Or maybe @JamesTedrick.  This seems to be a cross between a Workforce and Survey123 issue, but I'm thinking it's leaning towards Survey123.  Actually, it could be something I've done that I'm just not seeing.  I just don't know at this point.  I've been banging my head against the wall on this since last week, and I seem to be stuck.

@TylerBragg2 One thing to check is that all the required fields for Workforce Assignments layer are filled in and entered. Not sure why that wouldn't be handled on the first submit but it is a place to look.

I haven't heard of any reports like this - you'll want to grab the network traffic on submit to see what is going on.  As @jcarlson points out, this is something Tech Support should be able to help with.

@CraigGillgrass what do you mean by "...check that all the required fields for Workforce Assignments layer are filled in and entered..."?  I specifically omit all the required Workforce fields from my survey so as to prevent duplication or possible data overwrite situation with Survey123 submission vs. Workforce sync.  I only use the Survey to fill out the additional attribute fields that I've added to the Assignments layer.  The main Workforce fields are filled out in the Workforce App, then the "Survey at Assignment" is launched and the survey is filled out and submitted, which populates the attribute fields that are not available in Workforce.  Should I be doing this differently?  I don't understand why this was working prior to the AGOL update and now it's not.

Here's my URL that's set up in the Assignment Integrations layer:

Can you see anything wrong with this?  This should be the correct syntax, as it was working initially (Prior to April 13).  Craig, we discussed this in another thread recently (here).

Also, as a troubleshooting measure, I created a brand new survey in Survey123 Connect yesterday afternoon based off the Assignments feature layer.  I wanted to eliminate any problems with the configuration of my xlsform that I've been working with.  I made no configuration changes to this "stock" survey build directly from the feature layer, other than removing the workforce-specific fields, then published and changed the Assignments Integration link to the new survey.  It still produces a "Failed to Submit" error.  So it doesn't appear that the problem is in the xlsform configuration.

For some reason it seems as though this project has been plagued with problems...more so that usual.  Thanks for everyone's help.